Hugh Herr lost both legs to frostbite while rock climbing in New Hampshire’s White Mountains in 1982.

“The doctor viewed my body as broken,” Herr says. “But now I climb at a more advanced level than before the accident. Technology has the capability to heal.”

Today, Herr wears two prosthetic legs that help him climb with greater facility than before the amputations. The prosthetic toes’ stiffness make it possible to stand on the edges of small rocks, and the feet feature titanium spikes to help him climb ice walls.

Herr may be on his most daunting mission yet. He wants nothing less than to end disability by restoring full and natural limb functioning to those who have lost limbs. And he sees a day when prosthetics will help their wearers perform at a more advanced level than those with limbs.

In his role as director of the Biomechatronics Group at the Massachusetts Institute of Technology, he helps create “biohybrid” prosthetics that work in harmony with the humans who wear them. In the near future, wearers may well control the prosthetic limbs the way most everyone controls their natural arms and legs; without a thought.

Herr and his fellow researchers are pioneers in the emerging field of biomechatronics, which marries human physiology with electromechanics to create, as he puts it, a human augmented in capability. 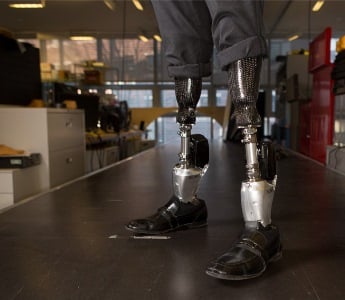 In the near future, wearers may control prosthetic limbs the way most everyone controls their natural arms and legs; without a thought. Image source: MIT“Were advancing extreme mechanical and electrical interfaces that will give us all new bodies with new capabilities,” Herr says.

Herr’s group has spent time studying the human gait to better mimic it.

“We’re building crazy robots to map the body biomechanically and understand how stiff we are when we move,” Herr says. “Then we can optimize prosthetics using those models to build a mechanical interface between the world and the human body.”

The researchers are developing prosthetic ankles, knees and legs that rely on motors along with sensors to mimic human motion and put an almost literal spring in the wearer’s step. His own self-designed motorized bionic legs adjust 500 times a second for angle, stiffness and torque.

The researchers have already developed a prosthetic knee that moves as part of the leg in the same way that a natural knee moves. Herr also designed a bionic foot and calf system called the BiOM. The system emulates the function of the lost muscles and tendons to energize steps. The ankle-foot part of the prosthesis includes an electric motor, five internal microprocessors and a quarter-dollar-sized inertial measurement unit that tracks and adjusts its location in space, for movement over all types of terrain.

The system offers more stamina for walking than other prosthetic legs, as it mimics normal ankle function for normal stride. Users can move at a faster speed, use less energy to walk, navigate varying terrain with less effort and at greater speed than those using other types of prosthetics, says Herr.

Although prosthetic limbs have advanced over the last decade or so, these newer methods—either recently released or still in development--are bound to improve upon prosthetic legs that use only robotic sensors and remote controls, says Levi Hargrove, director of neural engineering for the Prosthetics and Orthotics Laboratory at the Rehabilitation Institute of Chicago and research scientist at the Center for Bionic Medicine.

But prosthetics will never be natural if the wearer cannot control them intuitively, without thinking, as those without prosthetics move their own arm, legs, joints and digits, he says.

For nearly a decade, Hargrove and fellow scientists at the institute have studied the way brain signals travel down nerves to control the movement of limbs. They’ve captured those brain signals and used them to optimize the designs of what they call bionic prosthetic limbs.

“We now have robotic arms and legs that are quite strong and of reasonable weight and now we’re trying to figure out how the person can control or move them intuitively, he says. “When you want to move your arm or walk, you do it without really thinking. If you have a prosthetic, no matter how mechanically advanced, you can’t control it mentally, it’s like operating a crane on the side of your body.”

The researchers measure biological signals sent from the brain to determine how brain signals control the nerves and muscles. They use those signals to create what’s called myoelectric control systems that move prosthetic arms and legs without conscious thought.

“Even in partially amputated limbs, the muscles and nerves generate tiny electrical signals up to the point they are amputated,” Hargrove says. “We attempt to figure out how a person intended to use their missing limbs.”

To do this, the researchers place sensors on the skin to measure muscle signals, which are larger and easier to measure than nerve signals. Researchers have measured nerve signals by getting information from muscle near the nerves, using technology developed at the Rehabilitation Institute, Hargrove says.

“The muscle is like a speaker in that it amplifies nerve signals about 1,000 times, so they can be detected from the surface of the skin,” he says.

Nerve signals must be measured directly at the nerve--inside the body--which is difficult to do and more invasive than focusing on muscle signals, he says. 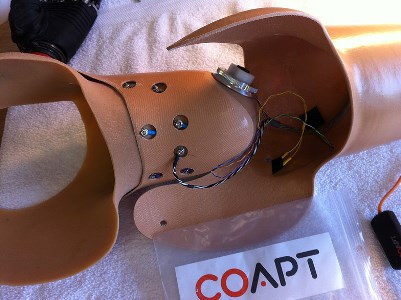 Prosthetic arm from Coapt Engineering.After those nerve and muscle signals are collected, the researchers used pattern recognition software to decode what the person was trying to do when they sent out the signal. From there, they created algorithms that allow users to control prosthetic arms and legs without thought.

Within about 60 seconds, the wearer teaches the system how to respond intuitively, Hargrove says. He likens it to voice recognition software, in which users have to speak a few sentences to help the software recognize and understand specific vocal patterns.

After donning the system, the wearer watches his or her prosthetic arm move and “plays Simon Says” to follow the arm while a pattern recognition model is built from the electrical signals the user is generating, Hargrove says. A control system for prosthetic legs is now in development at the Rehabilitation Institute.

“For lower legs, we’re working on making the system adaptive, so people can learn while they walk,” Hargrove says. “It’s like a horse, the first time it stands up, with wobbly legs, and then within a few steps, it’s walking.

He says the challenge is more difficult than the arm systems, because when humans walk they have gait profiles. Knee and ankles bend in consistent patterns, even when walking upstairs. Hargrove says that the company programs its system based on readily available gait profile data, and as a person walks, the system learns what each step means.

In addition to the preprogrammed gait information, the controller also will learn the wearer’s own gait by projecting the gait based on how he or she walks using their nonamputated leg, or with two leg prosthetics, he says. The controller works well in the lab and the researchers are now testing it outside the lab.

Restoring a Sense of Touch

These researchers are by no means alone in working on the future of prosthetics. Still other scientists are at work on endowing prosthetic limbs with the sense of touch, so wearers can feel, for example, a pencil gripped in their fingers or the sensation of fingers as they are brushed across the artificial skin.

Researchers at Seoul National University in Korea, for example, have demonstrated an artificial skin made of silicon. They plan to mount the artificial skin atop prosthetic limbs to provide wearers with the sense of touch. For this, the skin relies on neural signals to and from the brain.

With his new legs, Herr says that he climbs better than he did before the accident. And with future advances in prosthetics he says he expects to one day soon be rock climbing with even more speed and agility.

By posting a comment you confirm that you have read and accept our Posting Rules and Terms of Use.
Advertisement
RELATED ARTICLES
An Optogenetic Approach to Restoring Limb Movement
Watch: Researchers trip people to improve prosthetic legs
Robotic Hand Controlled by Muscle Vibrations
Prosthetics That Tune Themselves While in Use
Researchers Create Artificial Limbs that Can be Mapped in the Brain
Advertisement