New Foot Prosthetic Creates A Natural Walk While Being Affordable 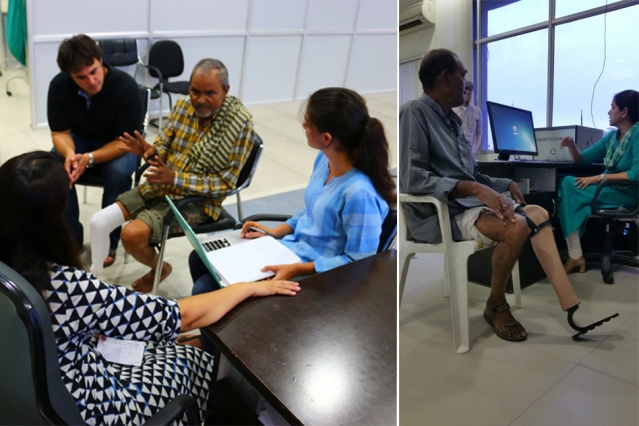 Prosthetics are vital to many people’s lives, but they can be incredibly expensive, often costing thousands of dollars. Jaipur Foot saw this need and contacted researchers at MIT to develop a prosthetic foot that is not only affordable but also can be tailored to enable the wearer to walk with the same ease as an able-bodied person. The result of this collaboration is a prosthetic foot that takes into consideration a person’s weight, size and gait, and the shape and stiffness of the foot can be adjusted to give the user a smooth walk.

The MIT researchers developed a design framework for the new prosthetic foot that offers a way to predict a person’s walking behavior when using the foot. The framework is all based around the design of the prosthetic foot.

When developing the new foot, the team wanted to find a way to quantitatively relate all of the prosthetic’s mechanical characteristics when a person is walking around. This kind of data had never been fully coded until now. In the past, developers have focused on how to replicate an able-bodied person’s movements, and they have not taken into consideration that an amputee cannot feel their prosthetic. The MIT team focused on just that. They wanted to make a foot that would produce lower leg motions that are similar to an able-bodied person’s lower leg motions.

After deciding they need to focus on the lower leg instead of just the foot, the designers looked at how the mechanics of the foot relate to how the lower leg moves, especially when touching the ground. The team recorded an able-bodied person’s movements when walking heel-toe and attempted to find just how a prosthetic would need to move in order to recreate this.

The team created a mathematical model of a simple, passive prosthetic foot and combined it with the data of the able-bodied person’s movements. The model takes into consideration the stiffness, possible motion and shape of the prosthetic. The model predicts how a lower leg with a prosthetic would move, taking into consideration the weight, shape and size of the foot. The team used this information to adjust the stiffness and geometry of the new prosthetic to create the correct lower leg trajectory to match the able-bodied movements.

"Ideally, we would tune the stiffness and geometry of the foot perfectly so we exactly replicate the motion of the lower leg," Amos Winter, associate professor of mechanical engineering at MIT, says. "Overall, we saw that we can get pretty darn close to able-bodied motion and loading, with a passive structure."

The next step was to find just the right foot shape. In order to create an affordable foot, it has to be a single part prosthetic that can still maintain the correct trajectory. The team ran a “genetic algorithm” with many different foot designs.

"Just like a population of animals, we made a population of feet, all with different variables to make different curve shapes," Winter says. "We loaded them into simulation and calculated their lower leg trajectory error. The ones that had a high error, we killed off."

The lower error prosthetics were then mixed and matched to create what the researchers believe is the perfect design, a foot with a toboggan shape from the side made of nylon. The team produced some test feet and sent them over to India to be tested by volunteers.

"What's cool is, this behaves nothing like an able-bodied foot -- there's no ankle or metatarsal joint -- it's just one big structure, and all we care about is how the lower leg is moving through space," Winter says. "Most of the testing was done indoors, but one guy ran outside, he liked it so much. It puts a spring in your step."

The team has now partnered with Vibram, an Italian company that produces rubber outsoles, to create a covering for the foot so a person can walk around barefoot with the prosthetic and not be self-conscious or worried that they are going to break the foot.

The team plans to conduct further testing on the foot in India. After that, the focus is mass producing these feet and getting them to the people who need them.

A paper on the new prosthetic foot was published in the ASME Journal of Mechanical Design.