Tests in California support the idea that a commercial wind farms equipped with an inverter-based smart controller can provide grid support services that include balancing or regulation up and down, voltage regulation control, active power control through ramping and frequency response. 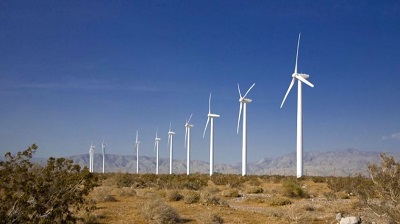 the research team worked over the course of several days in 2019 at Avangrid Renewables’ Tule Wind Farm. The plant is located in CAISO’s balancing authority east of San Diego and has a maximum capacity of 131.1 MW. It also participates in CAISO’s energy market. Credit: Avangrid RenewablesMost renewable generation is built to fulfill a renewable portfolio standard (RPS) and is offered a range of incentives to maximize energy production. However, providing critical grid services might require renewable resources to operate below their maximum capabilities. The report called on policymakers to consider aligning RPS policies with RPS-driven renewables incentives to provide essential reliability services to the grid and help integrate even more renewable generation.

Study participants said the results "demonstrate that wind resources have the capabilities to help accelerate the shift toward a future electric grid with high levels of renewable generation."

The results are similar to those reported in 2018 from tests that involved an inverter-controlled solar power plant. That earlier study focused on a 300 megawatt (MW) plant. Data collected during the test showed how advanced power control systems can help solar photovoltaics provide services that range from spinning reserves, load following, voltage support, ramping, frequency response, variability smoothing and frequency regulation to power quality.

In the most recent tests involving wind power, the research team worked over the course of several days in 2019 at Avangrid Renewables’ Tule Wind Farm. The plant is located in CAISO’s balancing authority east of San Diego and has a maximum capacity of 131.1 MW. It also participates in CAISO’s energy market.

The tests were designed to learn whether a wind power plant with an advanced plant-level controller can enhance system reliability by providing reliability services in order to:

The report said that a few grid operators use renewable curtailment as a resource. For example, the report said that Public Service Company of Colorado can control its wind generation to provide both up- and down-regulation services. The utility uses wind reserves as an ancillary service for frequency regulation by integrating wind resources located in its footprint to its automatic generation control (AGC) system.

The Tule wind farm is a 131.1 MW wind power plant connected via a combination of underground and overhead distribution lines to a 150-MVA (138/34.5-kV) transformer. The 34.5-kV side of the transformer supplies four circuits. Three of these circuits connect to supply turbine circuits via (34.5-kV/690-V) pad-mounted transformers that connect directly to individual turbine converter units rated at 4 MVA. The fourth circuit is connected to three switched capacitor banks rated at 21 MVAR to meet Large Generator Interconnection Agreement (LGIA) power factor requirements.

The plant includes a power plant controller (PPC) developed by GE. It is designed to regulate real and reactive power output so that it behaves as a single large generator.

The controller is designed to provide a number of plant-level control functions:

For the frequency response tests, the plant also operated in a curtailed mode to offer enough headroom to increase output in response to the frequency decline that took place outside of a defined deadband. Headroom is achieved by sending a curtailment command to the plant.

The plant again demonstrated "fast and accurate" frequency response performance for different droop settings (5% and 4% droop and 36 mHz and 16 mHz deadbands) under various wind conditions for both under- and over-frequency events.

The plant also demonstrated the ability to operate in voltage regulation mode and power factor control modes. The plant can operate in only one of the three modes at a time, with seamless transition from one mode to another, the report said. Under test conditions, the plant controller was able to maintain the specified voltage set points at the point of interface by regulating the reactive power produced or absorbed by the wind inverters.

Also, the plant’s ability to produce or absorb reactive power at nearly zero megawatt production (referred to as STATCOM mode) was demonstrated.

The project team said it considered testing the ability of the Tule wind farm to provide synthetic inertia. This test was not completed, however, because of the cost and labor required to upgrade controls in all 57 turbines at the plant. In addition, the project team did not view the inertial response from wind power as an essential service because the Western Interconnection does not expect an inertia deficiency in the near future.

By posting a comment you confirm that you have read and accept our Posting Rules and Terms of Use.
Advertisement
RELATED ARTICLES
Proving the Reliability of a Greener Power Grid
Here's How Energy Storage Is Used in Two Big Markets
As the Eclipse Progressed, Here's How California Power Generators Reacted
5MW Battery Storage Unit Enters Service in Germany
Tackling three challenges to foster wind energy expansion
Advertisement