As the Eclipse Progressed, Here's How California Power Generators Reacted 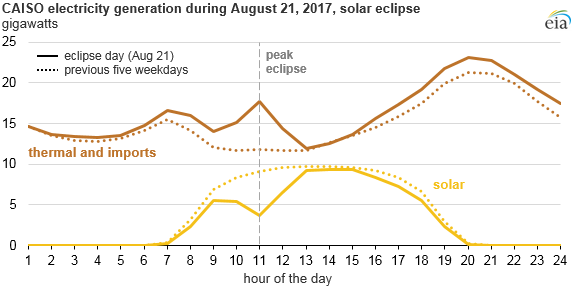 Solar output on the California Independent System Operator (CAISO) electric system fell while the sun was partially obscured during the solar eclipse that passed across the continental United States on Aug. 21, 2017.

Much of the decrease in solar output was made up by increased electricity imports and increased generation from thermal units, most of which is fueled by natural gas. The insight came from the Energy Department's Energy Information Administration.

Although California was not in the path of totality, the state contains 43 percent of the national total for utility-scale solar and 40 percent of small-scale solar (as of May 2017). Much of the state’s solar capacity is located in areas where sunlight was obscured by as much as 60–70% percent during the eclipse.

California also contains 5.7 GW of small-scale PV capacity. Electricity generation from small-scale capacity is not directly captured by CAISO but is reflected in a smaller overall load. 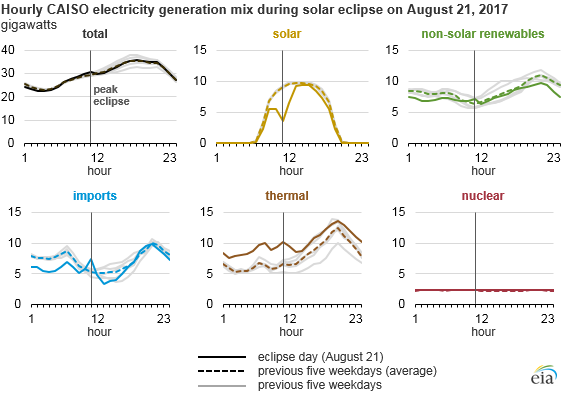 Source: EIACAISO worked with other participants in the Western Energy Imbalance Market (EIM) to include the impact of the eclipse in their forecasts so that planning accurately reflected available electricity supply. The EIM allowed for balancing across much of the Western Interconnect as the eclipse moved across the region and affected solar output in different places at different times. CAISO also worked with natural gas generators to ensure sufficient fuel supplies ahead of the eclipse.

CAISO planned for the rapid reduction and resumption of net load caused by the loss of solar during the eclipse by procuring an additional 100 MW to 150 MW of regulation capacity for the eclipse period. Regulation capacity is a market-based ancillary service that is used to cover short-term gaps between demand and supply.

On August 21, CAISO's total net load between 10:00 a.m. and 11:00 a.m. Pacific Time was 1.2 GW higher than the average of the previous five weekdays, due in part to the loss of small-scale solar generation that would have reduced load in the absence of the eclipse. Increased output of mainly natural gas-fueled thermal generation and imports of electricity together offset the loss of solar generation resulting from the eclipse.

Imports of electricity increased by 2.2 GW during the hour of the eclipse as CAISO drew power from the Los Angeles Department of Water and Power, the Salt River Project Agricultural Improvement and Power District in Arizona and the Bonneville Power Administration in the Pacific Northwest, among others. 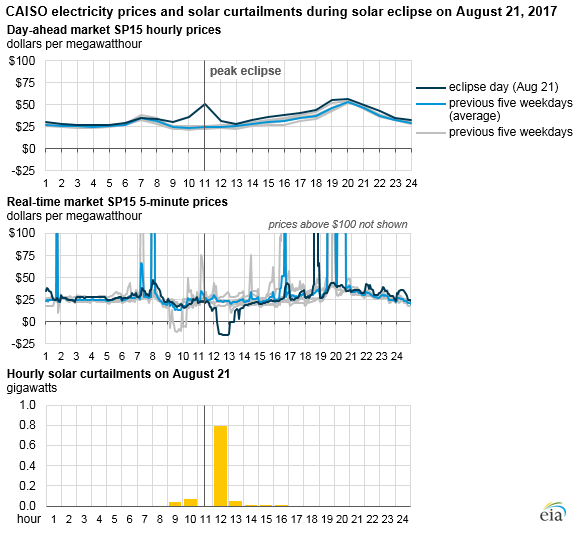 Source: EIAWholesale electricity prices in CAISO's day-ahead electricity market were higher for the hours of the eclipse compared with average prices during the week before. The expected decrease in solar generation meant that other higher-priced resources were scheduled to run during the period.

According to CAISO, less solar generation dropped off during the eclipse than they had forecasted. That, along with an expected increase in solar availability after the eclipse, contributed to brief periods of too much generation on the system. CAISO's real-time prices dipped negative immediately after the eclipse, reflecting the oversupply situation, which resulted in some solar generation being curtailed. That helped slow the return of solar electricity onto the system across a couple of hours.

By posting a comment you confirm that you have read and accept our Posting Rules and Terms of Use.
Re: As the Eclipse Progressed Here's How California Power Generators Reacted
#1

Nice analysis - thank you. Since there was a minor weather front surrounding the day of the eclipse, it would be nice to see 5 days of solar PV/thermal output to look at weather induced variability. Also, if wind generation data is available as a separate component of "all other green sources" it would be interesting to know how much capacity was in reserve, how much was brought on line, and how the distributed control network is able to respond to rapidly changing components of generating capacity.