Here's How Energy Storage Is Used in Two Big Markets

About two-thirds of utility-scale battery storage power capacity installed in 2016 in the United States is located in two electricity markets — the California Independent System Operator (CAISO), which covers much of California, and the PJM Interconnection, which covers all or parts of 13 eastern states and the District of Columbia. 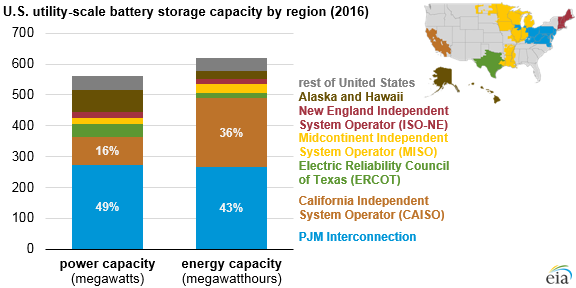 The PJM Interconnection currently has the most utility-scale battery storage capacity in both power and energy terms. In 2012, PJM’s ancillary services market introduced a frequency regulation product designed to compensate generation resources that can quickly adjust power output but are limited by the time they can sustain that output.

Since then, EIA says that utility-scale battery storage capacity in PJM has increased from 38 MW to 274 MW in 2016. More than 90 percent of the region’s installed battery capacity assists with frequency regulation, which helps maintain the grid’s electric frequency on a second-to-second basis. Utility-scale battery storage installations in PJM tend to have relatively large power capacities, averaging 12 MW, and short discharge durations, averaging 45 minutes. 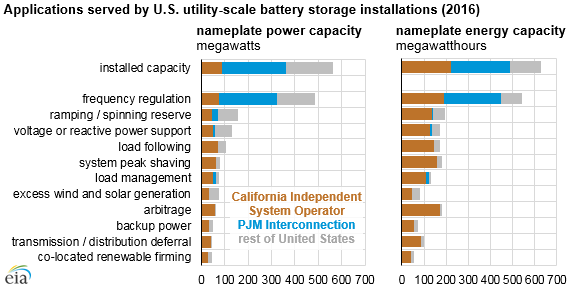 Source: EIAEIA says that as PJM introduced battery use into its market system, the region experienced operational issues in its frequency regulation market. Battery storage systems could not sustain output through the daily periods when electricity demand quickly increases. During these periods, battery systems were switching to charging mode, accelerating the increase in electricity demand.

To address the issue, PJM changed its regulation signals in January 2017. However, these new signals require battery systems to charge and discharge twice as often, which shortens their expected lifetime. EIA says that PJM’s changes to its regulation signals are the subject of pending complaints filed with the Federal Energy Regulatory Commission (FERC) by the Energy Storage Association and two storage project developers. FERC is the federal agency regulating the transmission and wholesale sale of electricity.

CPUC fast-tracked the approval of these installations to help address electricity reliability risks that resulted from constraints on natural gas supply following a leak at a major natural gas storage facility in Southern California. Another 42 MW of utility-scale battery storage capacity was installed in California in 2017, based on preliminary electric generator data reported to EIA.

Installations in California also tend to serve a wider array of applications than those in PJM because many have been procured by regulated utilities to serve multiple applications without necessarily being directly compensated for each application through CAISO market mechanisms.

Utility-scale battery storage capacity in other regions has not reached the levels observed in PJM and California, but actions by state and federal regulators may drive future deployment in other regions.

For example, Oregon, Massachusetts and New York have issued storage mandates or targets. At the federal level, FERC issued a ruling on February 15 requiring organized wholesale markets to remove barriers to the participation of electric storage resources in the capacity, energy and ancillary services markets.

By posting a comment you confirm that you have read and accept our Posting Rules and Terms of Use.
Advertisement
RELATED ARTICLES
Massive solar plus storage project cleared a hurdle
From holy grail to holy cow! Energy storage adoption accelerates
AEP Expands Energy Storage to Tap PJM Market
TEPCO Invests in Battery Storage System Serving PJM
Surge in Gas-Fired Power Plants Is Expected in 2018
Advertisement