Beresheet has moon landing in its sights

A lunar landing in April has come one step closer for Beresheet, the privately financed Israeli spacecraft that launched February 21 from Cape Canaveral, Florida.

A final 60-second engine burn on Tuesday, March 19, thrust the spacecraft into the longest earth orbit for 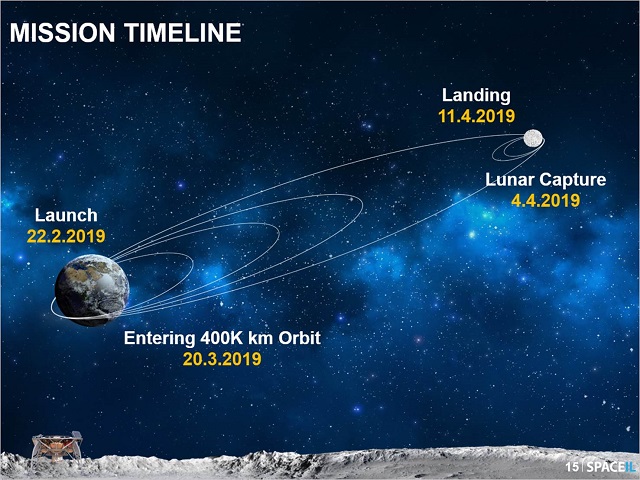 Beresheet's mission timeline and path to the moon. Source: SpaceILBeresheet’s voyage. The orbit’s apogee is about 252,000 kilometers away from Earth — equivalent to the distance from Earth to the moon. When the craft’s orbit and the moon’s orbit cross on April 4, the moon’s gravity is expected to capture Beresheet and send it into lunar orbit. The mission plan calls for the spacecraft to orbit the moon for a week, decreasing orbital length once in the interim before a soft moon landing on April 11.

The lunar landing site in the Mare Serenitatis is one of four proposed by a joint team from the Weizmann Institute of Science and SpaceIL, the nonprofit organization sponsoring Beresheet’s mission. Landing site criteria include a level surface and few craters, rocks or exposed slopes. Since part of the mission is to measure variations in the moon’s magnetism, the landing site needed to be at a spot where the moon’s surface is magnetic.

Does the name Mare Serenitatis, also known as the Sea of Serenity, sound familiar? That could be because two NASA missions, Apollo 15 and Apollo 17, landed in the same mare. Astronaut Buzz Aldrin famously left a bootprint in the area's soft lunar dust.

By posting a comment you confirm that you have read and accept our Posting Rules and Terms of Use.
Re: Beresheet has moon landing in its sights
#1

Buzz Aldrin was on Apollo 11, and could not left a print in the Sea of Serenity.