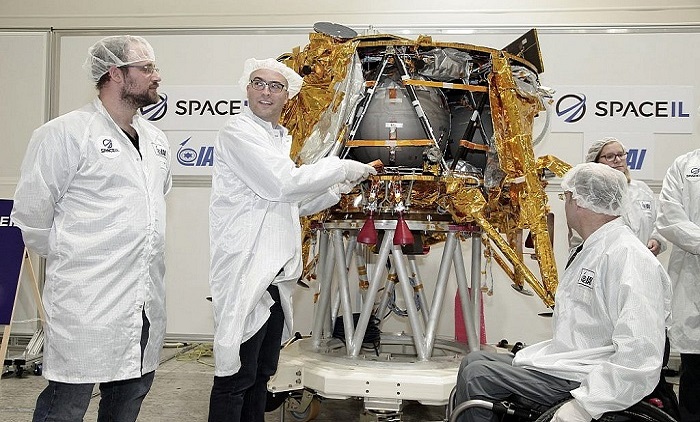 Three friends walked into a bar and a space capsule is now headed to the moon.

No joke. If everything goes according to plan, the capsule, which was the brainstorm of the three Israeli drinking buddies, will land in the moon’s Mare Serenitatis region on April 11. Its touchdown will give Israel membership in the exclusive club of nations that have achieved soft landings on the moon.

· Beresheet is the first space mission to the moon funded by private sources rather than by a national government. The Israeli government has pledged to contribute 10% of the cost. The rest of the $100 million was raised from private donors.

· The space capsule will not go straight to the moon. Instead, it will orbit earth four times over eight weeks, increasing the orbit’s size on each orbit. On its fourth and final orbit, the moon’s gravity will capture Beresheet and bring it into lunar orbit.

Three friends came up with the idea to land a spacecraft on the moon while they were relaxing at a bar in the Israeli town of Holon more than eight years ago. Only one of the three, Yonatan Winetraub, was a space engineer. Yariv Bash was a computer engineer and Kfir Damari, a drone maker and entrepreneur. As the trio talked that night, their excitement grew. They formed a nonprofit organization, SpaceIL, to pursue their lunar dream.

Their timing coincided with NASA’s shift to preparing for a trip to Mars rather than the moon and the advent of commercial space ventures like SpaceX, Virgin Galactic and Blue Origin. Google’s Lunar XPrize was launched in 2007 and SpaceIL was one of five teams still competing in early 2018 when Google scrubbed the competition. By then, however, the Israeli effort was within a year of completion.

Engineering a lander from scratch

Although none of the three partners in SpaceIL had designed a space vehicle, Winetraub had spent a year at NASA Ames Research Center in California. After their initial conversation and the formation of SpaceIL, they established a development partnership with Israel Aerospace Industries (IAI) and raised funds for design, testing and launch. One source of funding is Israeli billionaire Morris Kahn, who described the project as a gift to Israel. The project moved to initial design in 2015.

IAI’s experience designing technologies for defense and commercial customers provided the engineering expertise SpaceIL needed. IAI’s engineers faced challenges ranging from spacecraft durability to legs for landing on the moon and communications between Beresheet and earth.

The design team also faced budgetary constraints. SpaceIL wanted to prove that science-based moon missions do not have to cost billions of dollars and involve governmental support and control.

The completed spacecraft’s first journey was not to the moon but to Florida in January 2019 for final testing and mating to the Falcon 9 rocket. That trip was considerably shorter than Beresheet’s planned two-month journey to the moon; indeed, it will travel farther to arrive at the moon than any other moon-bound spacecraft.

Beresheet is spending eight weeks in an increasingly widening earth orbit because mission planners chose a thrifty option for sending their craft into space. As Yonatan Weintraub pointed out, it hitched a ride on the space equivalent of Uber to keep the modest — for a space mission — expenditures down.

The small capsule shared space with two larger payloads, a communication satellite and a U.S. Air Force experimental craft. Both of those are going into earth orbit rather than trekking to the moon.

But a spacecraft cannot head directly to the moon from earth orbit. Beresheet must line up with the moon first. The four planned orbits, or phasing loops, allow this synchronization to occur. The mission timeline image shows how the orbits lengthen until the moon captures the craft on orbit four. 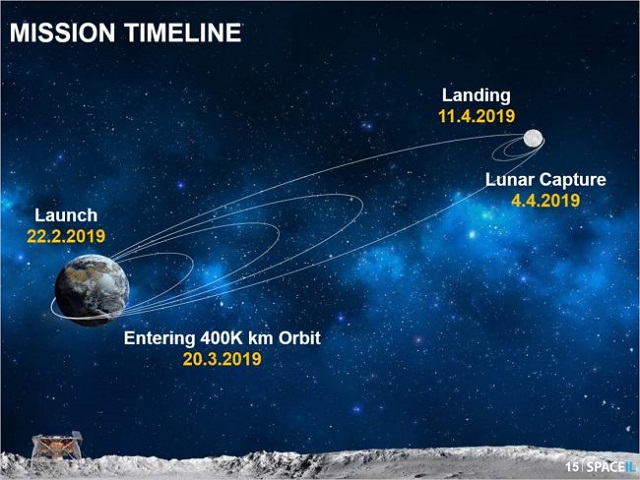 A graphic showing the Israeli lunar lander Beresheet's path to the moon. Dates correspond with Israel Standard Time. Source: SpaceILAfter landing on the lunar surface, Beresheet is expected to measure magnetic anomalies using a custom magnetometer designed by the Weizmann Institute of Science. Understanding these anomalies is one component that comes into play when selecting landing sites, so the craft’s data will be of interest for future landings. Scientists also believe that measuring the magnetism of rocks in the Mare Serenitatis will help them understand how and when magnetism arose and ultimately enable researchers to create a profile of the moon’s magnetic field.

Beresheet’s mission is expected to last about two days before it overheats and stops functioning. Before then, however, mission plans call for it to take one hop to a nearby location. Earth-based scientists will be able to pinpoint the craft's exact location by using a NASA-provided retroreflector. The mission’s brevity is a consequence of the tight budget. The lander’s designers did not add insulation and other temperature control measures, just as they omitted other redundant systems.

On February 24, Beresheet successfully separated from its ride into space and executed the first of several engine burns. This initial burn was intended to increase the spacecraft’s distance from earth to 43,350 miles. Future engine burns will position the spacecraft to enter moon orbit. If all goes according to plan, Beresheet will execute a soft lunar landing on April 11.

Along for the ride on this journey is a time capsule containing drawings by Israeli children, the Bible, Wikipedia, national anthem, prayers, Israeli songs and a map of Israel.

Engineers and donors connected with the project point out that the mission already is a success: a privately funded, cost-effective moon probe has launched as planned. Many people involved in the mission point to the potential impact on STEM education in Israel and the Middle East.

Whether or not the small spacecraft finishes its mission as planned, the project will have demonstrated the potential for future privately funded payloads to be carried aloft on commercial rockets.

By posting a comment you confirm that you have read and accept our Posting Rules and Terms of Use.
Advertisement
RELATED ARTICLES
Beresheet blasts closer to the moon
Beresheet 2 will continue its namesake’s mission
Lunar probe Beresheet back on track after computer hiccup
Beresheet moves into lunar orbit
Beresheet has moon landing in its sights
Advertisement