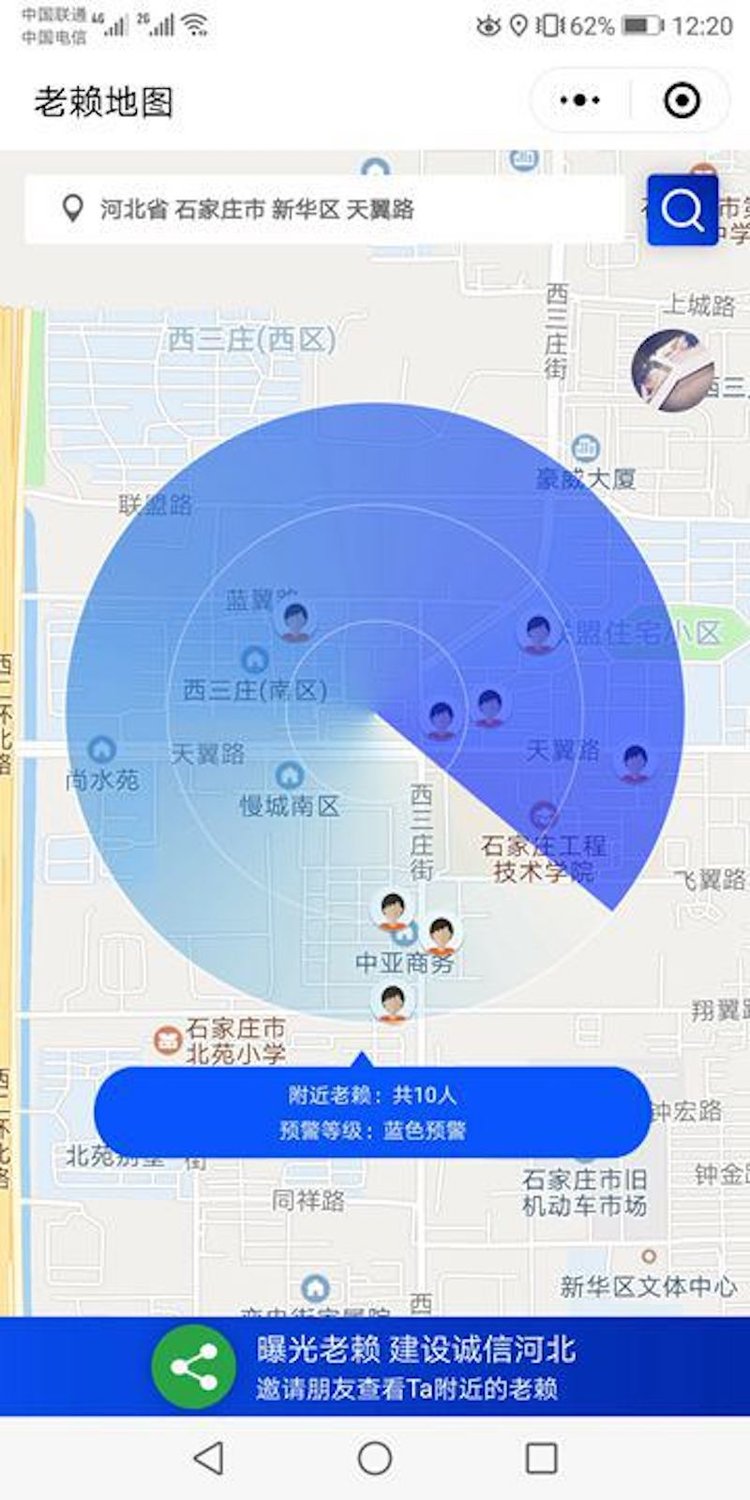 A screenshot of the "map of deadbeat debtors," the WeChat program. Source: WeChat via China Daily

Authorities in China have developed an app that alerts users if they are within 1,600 ft of someone in debt, according to reports from China’s state-run media.

Described as the “map of deadbeat debtors,” the app, which was launched in Hebei in northern China, is a tool to report the behaviors of debtors and whether they seem capable of repaying that debt.

Users can access the app through WeChat, a popular instant messaging platform, and the app will show the exact location of the debtor by flashing a warning on the platform. By tapping the screen, the debtor's personal information as well as their real-time location is visible, according to reports. However, it is currently unclear if the app includes details like the debtor's address, pictures or other identifiers, along with how much they owe and to whom. Also unclear is the behavior that would suggest the debtor is capable of paying back a loan.

The app is just one component of China’s controversial and soon-to-be mandatory social credit system. By 2020, the social credit system will be used as a measure of a citizen's trustworthiness based on factors including their ability to pay back loans and on their public transportation behaviors.

In the absence of traditional banking, people living in China will be judged on this alternative system when applying for loans, sending their children to school and renting houses. The system, which is already in place in parts of China, is also punitive. Punishment has already been doled out to roughly 6,000 people who were unable to pay back loans or who misbehaved on public transportation in recent years. These offenders were prohibited from traveling out of the country by train or plane for a period of six months, according to state media.

China is no stranger to controversial techniques for monitoring its citizens. It is considered a leader in facial recognition technology, using it to nab suspicious concert goers, beer festival attendees and even jaywalkers. The tech-savvy country is also using sensors built into school uniforms to monitor students.

Re: China develops app targeting those in debt
#1

Our brave new world, coming to democracies near you if you do not remain vigilant regarding government overreach.

Re: China develops app targeting those in debt
#2

China doing work on new things and there are new projects are the sign of it. I buy best essay so I come to know how China work in the field of technology.

Re: China develops app targeting those in debt
#4