Anymal is a four-legged robot with the dimensions of a medium-sized dog which can operate autonomously on rough terrain while safely interacting with its surroundings. 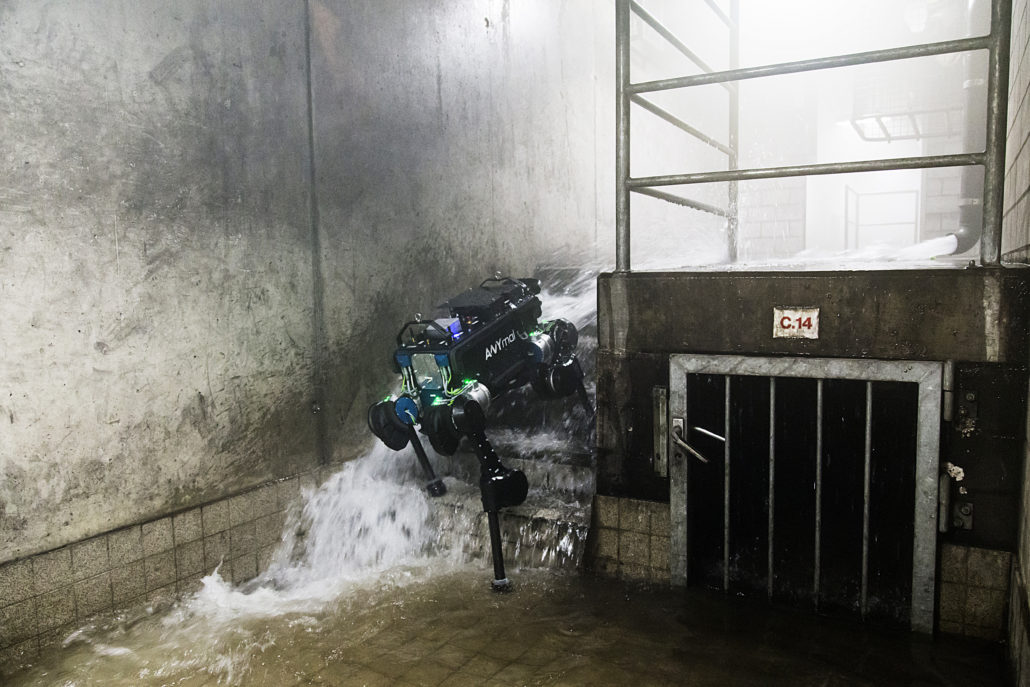 Anymal independently navigates by continuously mapping its environment with stereo cameras and lidar to understand its location and any obstacles to plot an optimal path forward.

The robot is the result of nearly a decade of research and development on legged robotic systems at Swiss university ETH Zurich, starting in the school’s Autonomous Systems Lab (ASL) and continuing in its Robotic Systems Lab (RSL). Beginning with the prototype StarlETH platform, the team at ETH Zurich refined the robot’s balance, navigation and actuation until they had a functional, autonomous machine capable of useful tasks.

Anymal first demonstrated a real-world application at the Autonomous Robot for Gas and Oil Sites Challenge, sponsored by Total S.A., which required robots to perform inspection and emergency intervention tasks at a simulated oil and gas site.

In 2016, a group of engineers working on Anymal founded RSL spin-off Anybotics AG to bring the robot to market. 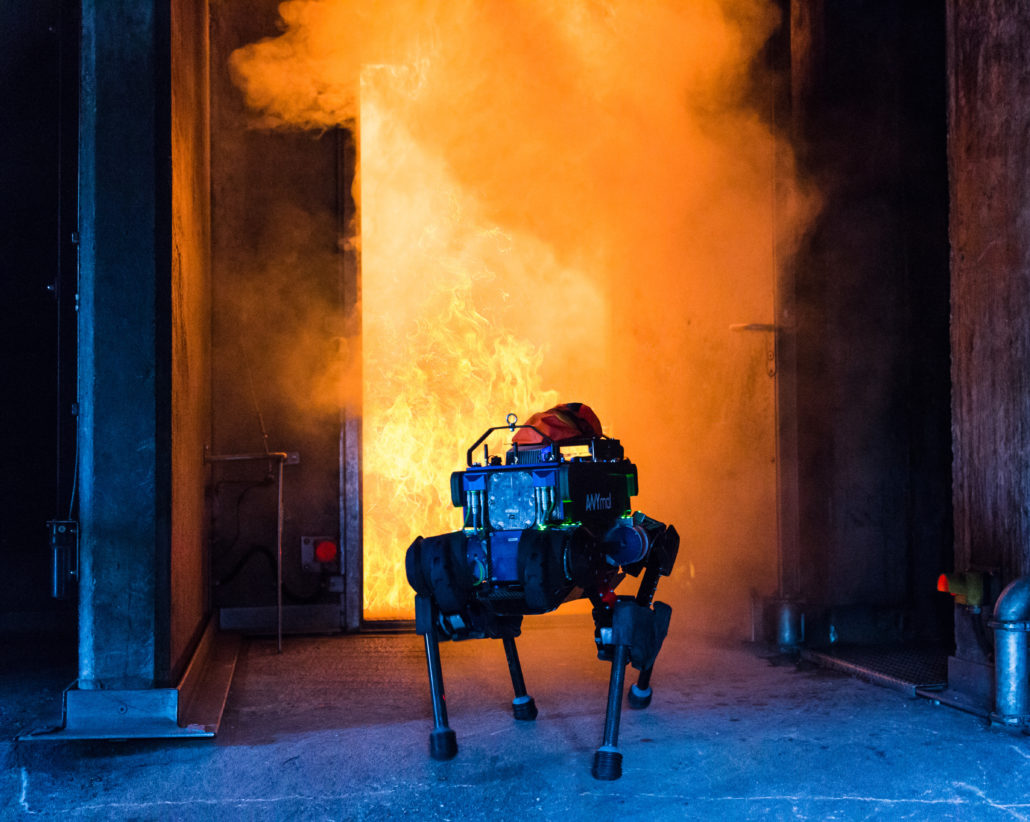 Designed to operate in harsh industrial environments like offshore oil platforms, Anymal has a minimum ingress protection rating of IP67, making it waterproof and dustproof. The robot can work indoors or outdoors on a variety of surfaces including sand, gravel and snow. Anymal can be employed in varied jobs such as mapping plant growth in agricultural settings, patrolling secure facilities in surveillance applications and supporting emergency personnel in search and rescue missions. The robot has even starred in an episode of the X-Files alongside agents Scully and Mulder.

Anymal’s carbon fiber and aluminum construction provides high structural strength while minimizing weight. Weighing just 30 kg, the robot can carry an extra 10 kg of payload. A customizable interface mounts additional sensor packages or other hardware. For example, with a loadout geared toward inspection of oil and gas facilities, the robot might carry a zoom camera to read pressure and level gauges, a thermal camera to measure equipment temperatures, a microphone to detect abnormal machine acoustic signatures and a gas detection sensor to identify leaks. 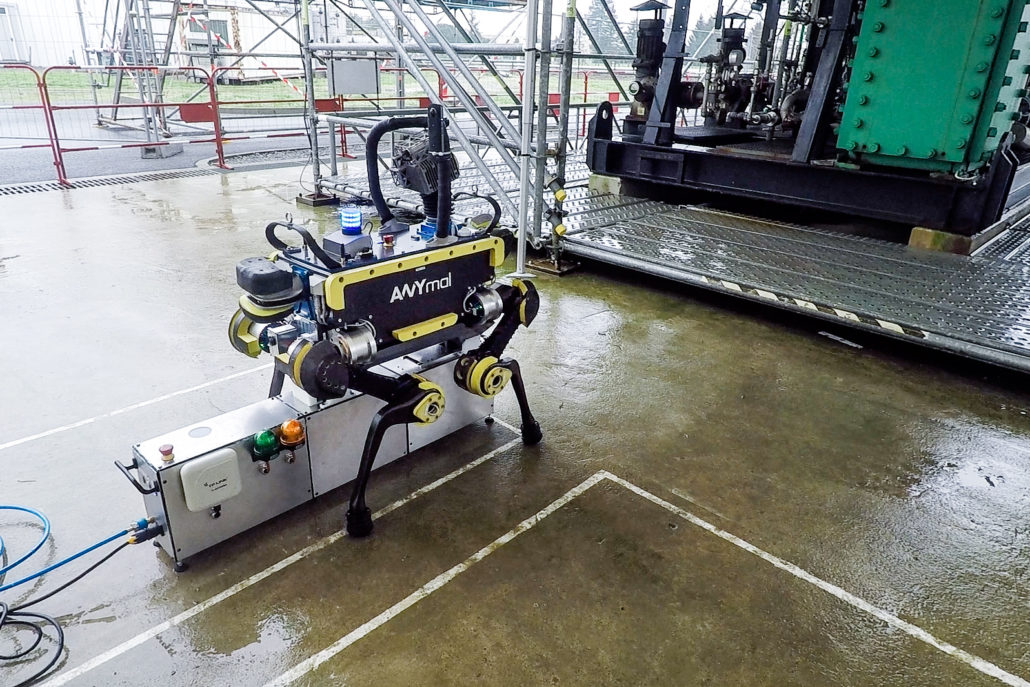 [Explore products or learn more about gas sensors on Engineering360.]

Anymal can be instructed to carry out such tasks autonomously through an easy-to-use programming interface.

The platform runs on open-source Linux distribution Ubuntu and robotics middleware robot operating system (ROS). Layered on top of this architecture is a variety of software tools including Grid Map, a library that manages 2D maps containing multi-layer data on environmental properties important to robot navigation, including friction coefficients, elevations and surface normals; and Free Gait, a framework through which the specific motions involved in various robot maneuvers can be defined. 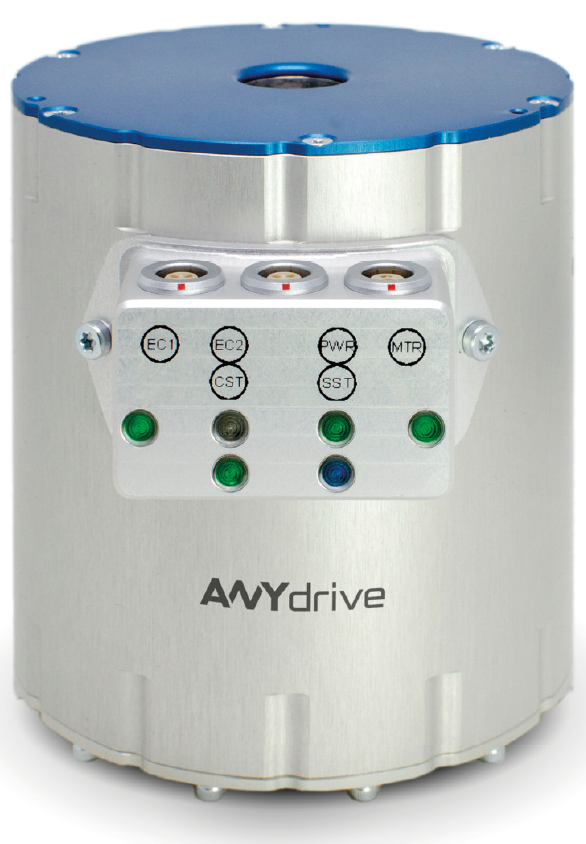 Anymal moves around thanks to 12 Anydrive robot joints. Anydrives are a type of series elastic actuator (SEA) that mimics the way forces are handled by real muscles and tendons. SEAs separate the force output of the actuator from the actual motor and gear with a spring element. The spring makes the device more robust by absorbing sharp impacts. It also temporarily stores energy to improve peak power and enables precision control of joint torque. At peak power, the actuator draws 720 W of power to generate 40 Nm of torque (an improved version doubling torque output is coming soon).

Anydrive joints have a full 360° range of motion. With three actuators per leg, Anymal is capable of versatile movements. In addition to walking, jumping and running, the robot can climb up steps and crawl through pipes. On flat terrain, it can hustle along at speeds up to 1 m/s.

For all its strength and speed, Anymal is also capable of more delicate interactions. Sensors embedded in the robot’s feet provide haptic data to ensure it does not apply too much force when performing tasks like pushing doors open or pressing buttons. An inertial measurement unit (IMU) containing three gyroscopes and three accelerometers in every Anydrive, along with absolute encoders, provide detailed velocity, acceleration and position feedback for high-precision motion control. Absolute joint position is controlled with a resolution of 18 bits to an accuracy of better than 0.025°.

With an average power consumption of 300 W, Anymal’s batteries provide two to four hours of power before running out of juice. Not to worry, though: the robot can autonomously return to a docking station to charge up before continued operations.

By posting a comment you confirm that you have read and accept our Posting Rules and Terms of Use.
Advertisement
RELATED ARTICLES
Multi-legged counter-terrorism robot in development
Watch: New Robot Can Autonomously Change Shape Based on its Environment
Robotic rodent inspects pipelines
GE, DARPA developing earthworm-inspired tunneling robot
Watch: Design of new drilling robot inspired by moles
Advertisement