A European Commission-funded consortium has designed and tested a net to capture a deployed target simulating a piece of space debris.

The RemoveDEBRIS satellite was launched aboard the SpaceX Dragon craft in April 2018 and was recently deployed from the International Space Station. The mission’s goal is to evaluate different active debris removal systems on simulated targets in low-Earth orbit. RemoveDebris will also be used to test a camera- and LiDAR-equipped vision-based navigation system, a harpoon capture device and a drag-sail that will end 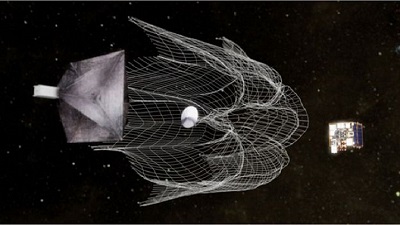 The growing volume of space junk poses a threat to satellite operation and space missions. In 1996, a French satellite was hit and damaged by debris from a French rocket that had exploded a decade earlier. In 2009, a non-operational Russian satellite collided with and destroyed a functioning U.S. Iridium commercial satellite. That collision, which occurred at a speed of some 11.7 kilometers per second (7.3 miles per second), added some 2,000 more pieces of debris to the inventory of space junk.

RemoveDEBRIS is just one approach under development to help Earth take out its orbital trash, which includes systems that create atmospheric drag for this purpose, such as the use of an electromagnetic tether or parachute to cause an orbital shift.

Participants in the RemoveDEBRIS consortium include:

By posting a comment you confirm that you have read and accept our Posting Rules and Terms of Use.
Advertisement
RELATED ARTICLES
Watch a harpoon skewer space debris
'Space Harpoon' in Development to Help Clean up 'Space Junk'
Military satellite launched to fight space junk
The need to extend environmental protection to orbital space
The origins of orbital debris
Advertisement