'Space Harpoon' in Development to Help Clean up 'Space Junk' 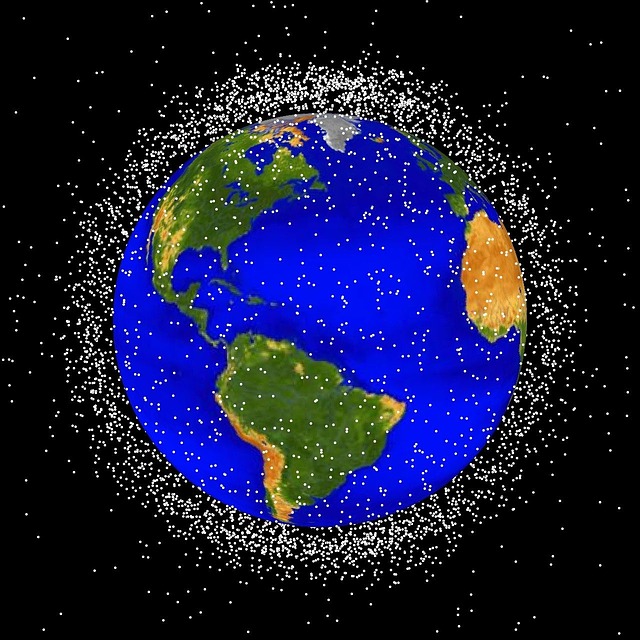 With over 20,000 pieces (larger than the size of a softball) of space debris floating around outer space, according to a 2013 report from NASA, European company Airbus has been at work developing a “space harpoon” to help with clean-up efforts.

At roughly 3-feet long, the high-tech harpoon will be tethered to a larger spacecraft capable of locating the space junk. Once located, the harpoon will be hurled at the items at approximately 82 feet per second.

"The harpoon goes through these panels like a hot knife through butter," advanced project engineer Alastair Wayman said. "Once the tip is inside, it has a set of barbs that open up and stop the harpoon from coming back out. We'd then de-tumble the satellite with a tether on the other end."

Being designed specifically to help capture the Envisat Earth observation platform — which is considered the world’s largest civilian Earth observation platform and thus capable of causing the most damage — launched by the European Space Agency in 2002, the harpoon has been under development for some time now. However, as concerns mount for larger and larger debris coming into contact with and subsequently damaging important satellites, Airbus is on the verge of finalizing the harpoon design.

Re: 'Space Harpoon' in Development to Help Clean up 'Space Junk'
#1

From the picture, couldn't visiting space aliens reasonably conclude that our planet essentially has some form of techno-dandruff, and is occupied by mentally deficient beings whose ignorance could be dangerously contagious, and should therefore be quarantined, for the greater galactic good... especially after figuring out how to translate our insistance on broadcasting more and more staged reality shows... to the extent that we're now starting to drag down the property values on the nearby planets too?...

Re: 'Space Harpoon' in Development to Help Clean up 'Space Junk'
#2

Whoever came up with the, " space harpoon " idea should do a big favor for the rest of us and bend over and take it up the arse.

99% of the debris floating in space is not panels that can be harpooned.

Its little bits and pieces of this and that. About the only thing this hair brained idea will do is create more junk.

Re: 'Space Harpoon' in Development to Help Clean up 'Space Junk'
#3

Re: 'Space Harpoon' in Development to Help Clean up 'Space Junk'
#4

Here is my idea. You build a space work ship out of Kevlar, you take cylinders of c02 and put them into the work ship ( you get the c02 from the people that want to store it on the ocean bottom ) . NASA says they are tracking the debris. You accelerate the ship up to the fastest speed of an object and you use the c02 to maneuver and to slow down. When a tank is empty, you eject it. All of the stuff could be encased in an expanding foam. You collect all of the debris and drop it off ( kinda like they do on the farm when they have the round hay bales ) then you either collect your bales or you put them in a decay orbit where a whole bunch burns up.

1. If a space ship goes up, it must bring everything it brought up back, plus some.

4. Any satellite must be designed to automatically go into decay mode, once it's primary mission is completed.

Re: 'Space Harpoon' in Development to Help Clean up 'Space Junk'
#5

"We're whalers on the moon

and we carry a harpoon.

But there ain't no whales

so we tell tall tales

and sing our whaling songs."