Solid waste management isn’t solely an issue for the Earthbound. What goes up doesn’t necessarily come down: the volume of space junk orbiting our planet is growing, posing collision risks for operating manned missions and satellites.

Where and What Is It?

NASA and the U.S. Department of Defense are using ground-based telescopes and laser radars (ladars) to track more than 17,000 orbital debris objects to help prevent collisions with operating missions. Such ladars shine high-powered lasers at target objects, measuring the time it takes for the laser pulse to return to Earth, to pinpoint debris in the sky.

A laser polarimetry technique developed at MIT can determine where and what kind of junk is passing overhead. The method could also help determine an object’s mass, momentum and potential for destruction.

The European Space Agency (ESA) estimates that there are about 750,000 pieces bigger than one centimeter (0.4 inches) in orbit, a number that could grow to about 1.2 million by 2030. The agency is urging nations to reveal concealed data on the whereabouts of hundreds of thousands of pieces of space junk. The information can be compiled to form open database on space debris, allowing experts to issue collision warnings and give spacecraft time to take evasive action.

So what happens if a spacecraft gets hit by a piece of cosmic debris?

In 1996, a French satellite was hit and damaged by debris from a French rocket that had exploded a decade earlier. In 2009, a non-operational Russian satellite collided with and destroyed a functioning U.S. Iridium commercial satellite. That collision, which occurred at a speed of some 11.7 kilometers per second (7.3 miles per second), added some 2,000 more pieces of debris to the inventory of space junk.

How Can We Remove Litter from Low Earth Orbit?

Different technologies are being pursued to help Earth take out its orbital trash, ranging from systems that create atmospheric drag for this purpose, such as the use of an electromagnetic tether or parachute to slow down. 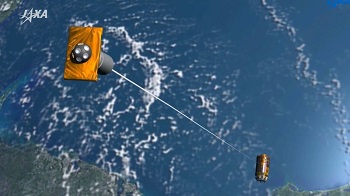 An artist’s rendering of the KITE electrodynamic tether experiment. The Japanese space agency has until Saturday to deploy the experiment. (Image Credit: JAXA)supply the International Space Station and to test a specially designed space junk collector. The 2,300-foot (700-meter) long tether made from thin wires of stainless steel and aluminum and a 44-pound (20-kilogram) end-mass is designed to generate electricity as it swings through Earth’s magnetic field. The idea is that the electric field will attract and slow down debris. However, problems were encountered in extending the tether, bringing to doubt the experiment's success.

For an ESA mission planned for 2023, a 1,600 kilogram (3,500 pound) spacecraft will be launched on board a Vega rocket into a polar orbit at an altitude of 800 to 1,000 kilometers (500 to 620 miles). Once on orbit, the spacecraft will rendezvous with a derelict satellite in an unknown condition and attempt capture it in one of two ways: either by using mechanical tentacles or nets. The tentacle option includes equipping the spacecraft with robotic arms, one of which will first capture a holding point before the remaining arms embrace the derelict satellite and secure it with a clamping mechanism. The net option includes equipping the spacecraft with a deployable net on a tether that will envelope the derelict target before the spacecraft begins to change orbit. The net option has the advantage of being able to capture objects with a wide range of sizes and spins. 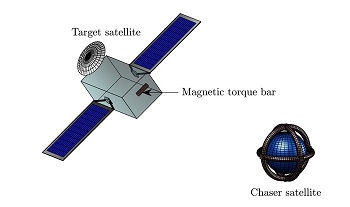 Magnetotorquer. (Source: ESA)In other ESA-supported research, scientists at the Institut Supérieur de l'Aéronautique et de l’Espace, part of the University of Toulouse in France, are advancing magnetic grappling. Dead or obsolete satellites can be maneuvered to be deorbited or to achieve a desired orbital shift using magnetic forces exerted by chaser tugs. The strong magnetic field required by the chaser satellite would be generated using superconducting wires cooled to cryogenic temperatures.

British firm Hempsell Astronautics, U.K., has proposed the Necropolis system to collect defunct geostationary satellites and deliver them to a single spot in a "graveyard orbit." This area is situated a few hundred kilometers above the roughly 22,000-mile-high (36,000-kilometer) geostationary ring. Necropolis would consist of two spacecraft: a Hunter, which collects other spacecraft and pushes them up away from the geostationary ring, and a Terminus, the final parking spot for the no-longer-needed satellites.

In another proposal, a team from the University of Colorado Boulder envisions pushing defunct spacecraft away from the crowded geostationary ring without even touching them. This concept would use a "pulsed electron gun," an intermittent electron beam of several tens of watts of electrical power.

International guidelines recommend that operators remove spacecraft from low-Earth orbit within 25 years from the end of the craft's mission, but only 60 percent of missions comply. Some researchers contend that the mounting volume of space junk will lead to the Kessler Syndrome, a cascading chain of collisions that would render orbital space unusable.

Re: Video: Removing Derelict Satellites and Other Space Debris
#1

Do we know how many countries have contributed to the space junk problem? Clearly the US and the USSR/Russia own the lion's share. Maybe if anyone who launches a satellite should have to put money in escrow to clean it up down the road.

Re: Video: Removing Derelict Satellites and Other Space Debris
#2

It occurs to me that the Necropolis system proposed by the British company is a pretty good one, but ultimately does not go far enough in my view.

Huge amounts of money and resources were used getting the items that are now "junk" into space. Any plan that just pushes these bits of junk into a decaying orbit so they burn up entering the atmosphere makes the resources they contain and the energy used to get them where they are as well as the energy required to get them to enter a decaying orbit, prevents us from any chance of recovery.

No matter how ill-advised, several groups are looking at sending people to other planets. They all face the issue of getting sufficient material into space to undertake the journey. But there is a LOT of material already there! After Necropolis has herded the materials to Terminus, terminus could be used as a 'recycling station' to strip the junk and produce usable materials for the missions to other planets, either by building parts of the craft needed or building a 'staging post' to launch missions from. The energy to do this would be reasonably high, but in my view, it is better than wasting the resources the junk represents by burning them and with unknown consequences from all this material entering our atmosphere.

I agree, the junk needs to go, I agree, nations or organisations who contributed to putting it there should contribute to its removal, the escrow idea is a good one "BestInShow", getting everyone to do it might be a difficult thing to arrange though.

Re: Video: Removing Derelict Satellites and Other Space Debris
#3

Perhaps I'm being overly critical of semantics, but I've looked at several places where there was a headline saying something to the effect of "See a satellite harpoon a simulated piece of space junk", and I understand that the experiment was successful, but I have yet to see a video of it. I've seen what I believe is a video of the net capturing its "prey"; I've seen some computer simulations of the harpoon in action, and I think I have seen at least one still photo of the harpooned object, but no video of the actual firing/ interception...