Two nuclear power plants that are shutting down will be sold to a business unit of Holtec International and SNC-Lavalin for accelerated decommissioning.

Entergy Corp. will sell the Pilgrim Nuclear Power Station in Massachusetts and the Palisades Power Plant in Michigan, after their shutdowns and reactor defuelings. The sales include the transfer of the licenses, spent fuel, and Nuclear Decommissioning Trusts (NDTs), as well as the site of the decommissioned Big Rock Point Nuclear Power Plant also in Michigan.

The sales are subject to conditions to closing, including approvals from the U.S. Nuclear Regulatory Commission of the license transfers. In a filing with the U.S. Securities Exchange Commission, Entergy says it will receive $2,000 for the assets.

The agreement marks the second time in a week that the Holtec-SNC venture, known as Comprehensive Decommissioning International (CDI) has signed on to decommission a U.S. nuclear power plant. In late July, it agreed to buy the 636 megawatt (MW) Oyster Creek nuclear station in New Jersey from Exelon and decommission it within eight years.

Pilgrim nuclear station.CDI expects to start decommissioning of Pilgrim in 2020, with all major work to be completed in around eight years. A timeline for the decommissioning of Palisades will be developed closer to its shutdown. For both Pilgrim and Palisades, Holtec expects to move all of the spent nuclear fuel out of the spent fuel pools and into dry cask storage within three years of the plants’ shutdowns.

Holtec and Entergy expect to file a license transfer request with the NRC in the fourth quarter of 2018 for Pilgrim, with transaction closing targeted by the end of 2019. The Palisades license transfer request would take place closer to its planned shutdown in the spring of 2022, with transaction closing expected by the end of that year.

The Pilgrim Nuclear Power Station employs about 600 people and has a generating capacity of 680 MW. It was built by Bechtel and uses a single General Electric BWR 3 boiling water reactor. Pilgrim began generating electricity in 1972. Entergy bought the plant in 1999 from Boston Edison. 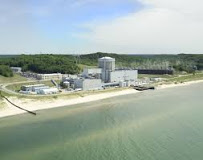 Palisades nuclear station.The Palisades Power Plant employs about 600 people and began generating electricity in 1971. It used a Combustion Engineering pressurized water reactor. The single-unit plant has a generating capacity of more than 800 MW. Entergy bought the plant in 2007 from Consumers Energy and operates it under a 15-year power purchase agreement that expires in the spring of 2022.

Big Rock Point Nuclear Power Plant operated from 1962 to 1997 and its decontamination and dismantlement were completed in 1999. Entergy acquired Big Rock Point from Consumers Energy in 2007 as part of the Palisades transaction.

By posting a comment you confirm that you have read and accept our Posting Rules and Terms of Use.
Advertisement
RELATED ARTICLES
Pilgrim closes and Crystal River looks to speedy decommissioning
Early close for Michigan nuclear power station
These NY nukes are headed for decommissioning
Nation's Oldest Nuclear Reactor Calls It Quits
Pilgrim Nuclear Plant to Close in 2019
Advertisement