The accelerated decommissioning plan is subject to approval by the U.S. Nuclear Regulatory Commission and the Florida Public Service Commission. The process will take about a year to complete. If approved, decommissioning work would begin in 2020 and end in 2027. 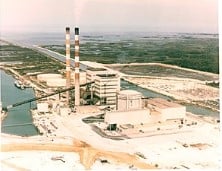 The shuttered Crystal River nuclear plant is adjacent to a coal-fired unit that also is being retired. Credit: Duke EnergyDuke Energy previously announced its decision to retire the plant in February 2013, and to decommission it by 2074.

To perform the work, Duke Energy has contracted with Accelerated Decommissioning Partners, a joint venture between NorthStar Group Services and Orano USA.

In a separate development, control room operators at Entergy’s Pilgrim Nuclear Power Station in Massachusetts shut down its reactor for the final time on May 30. The company said its decision to shut down Pilgrim was the result of a number of financial factors, including low wholesale energy prices.

Pilgrim Nuclear employs about 600 people and had a generating capacity of 680 megawatts. It entered service in 1972. Entergy purchased the plant in 1999 from Boston Edison. 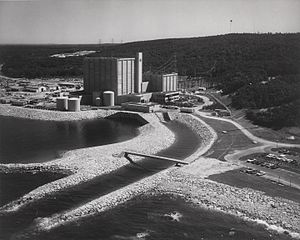 The Pilgrim nuclear power plant in Massachusetts shortly after it opened in 1972. Credit: energy.gov. In August 2018, Entergy proposed selling the business unit that owns Pilgrim to a Holtec International subsidiary, a decommissioning company that plans to complete decommissioning at the site decades sooner than if Entergy continued to own the plant. Regulatory approval and closing of the transfer are targeted for 2019.

Entergy’s remaining operating nuclear power plants in merchant power markets - Indian Point Unit 2 and Unit 3, in New York, and Palisades Power Plant, in Michigan, are scheduled to be shut down in 2020, 2021, and 2022, respectively. These closures, along with the sale of these plants to decommissioning specialty companies, mark the end of Entergy’s participation in merchant power markets and its return to a pure-play utility.

After analyzing options, Duke Energy announced in February 2013 that the Crystal River Nuclear Plant would be permanently shut down. Duke Energy said it is now pursuing accelerated decommissioning at Crystal River for two reasons.

Second, Duke Energy has completed the initial phase of decommissioning, placing the plant in a condition to attract bidders to complete the work. This progress, coupled with increased competition in the industry, has lowered decommissioning costs, the utility said, making the accelerated model financially feasible.

If regulators approve the transaction, Duke Energy will remain the Nuclear Regulatory Commission-licensed owner of the nuclear plant, property and equipment and retain ownership and control of the trust fund that pays for the decommissioning.

Dismantling the coal-fired units is expected to start in 2019 and finish in 2023.

Re: Pilgrim closes and Crystal River looks to speedy decommissioning
#1