The Carnegie Institution for Science, a non-profit scientific research organization, has found 12 new moons orbiting the largest planet in our solar system, Jupiter.

The group found 11 normal outer moons and one the group calls an “oddball” bringing the total number of known moons around Jupiter to 79 — the most of any planet in the solar system.

The team found the moons in the spring of 2017 while search for very distant solar system objects as part of the hunt for a possible massive planet far beyond Pluto, sometimes called Planet X or Planet Nine.

"Jupiter just happened to be in the sky near the search fields where we were looking for extremely distant solar system objects, so we were serendipitously able to look for new moons around Jupiter while at the same time looking for planets at the fringes of our solar system," said Scott Sheppard, a scientist at Carnegie. 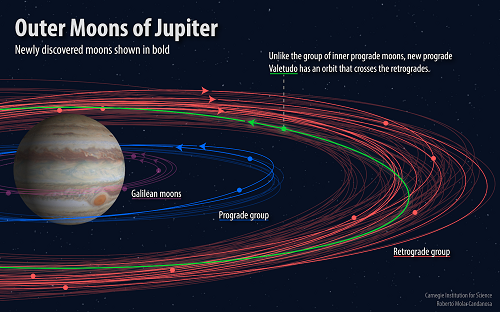 Nine moons were found in retrograde orbit, while two were found in prograde and a third travels between the two. Source: Carnegie Institution for ScienceNine of the new moons are part of the distant outer swarm of moons that orbit Jupiter in retrograde, or the opposite direction of Jupiter’s spin rotation. These moons are grouped into at least three distinct orbital groupings and may be the remnants of three once-larger parent bodies that broke apart during collisions with asteroids, comets or other moons. These moons take about two years to completely orbit Jupiter.

Two of the new moons are part of the inner group of moons that orbit in the prograde of Jupiter, or in the same direction as the planet’s rotation. These are also thought to be fragments of a larger moon that broke apart, and they take a little less than a year to travel around Jupiter.

"Our other discovery is a real oddball and has an orbit like no other known Jovian moon," Sheppard said. "It's also likely Jupiter's smallest known moon, being less than one kilometer in diameter."

This moon is more distant and more inclined than the prograde group of moons and takes about one and half years to orbit Jupiter. Unlike the other prograde group of moons, it has an orbit that crosses the outer retrograde moons. As a result, head-on collisions are more likely to occur between this oddball moon and the retrograde moons, which are moving in opposite directions.

“This is an unstable situation," Sheppard said. "Head-on collisions would quickly break apart and grind the objects down to dust."

The scientists said this oddball moon named Valetudo — the Roman version of the Greek goddess Hygieia — may be the last remaining remnant of a once larger prograde-orbiting moon that formed some of the retrograde moon groupings during past head-on collisions.

The team found the moons in the spring of 2017 while searchING for very distant solar system objects as part of the hunt for a possible massive planet far beyond Pluto, sometimes called Planet X or Planet Nine, what?

You can actually subscribe to courses online that will teach you English. For free!