Welcome to this week's edition of the Engineering360 news brief. 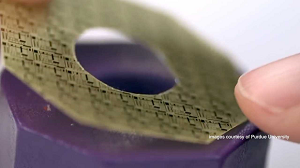 Source: Purdue UniversityThings grows in scope. As a result, the technology that enables these objects to communicate and sense each other will need to be developed differently than current states. Because of this, researchers at Purdue University and the University of Virginia have developed a new fabrication method that makes tiny, thin-film electronics circuits peelable from a surface. The process eliminates several steps in the manufacturing process along with the associated costs, but also allows objects to sense its environment or be controlled through the application of a high-tech sticker.

Current lithium-ion batteries used in electric cars are reaching their natural limit of how much charge they can hold. This limits how far an electric car can drive before it needs to be charged, and how many charge cycles its battery has left. Lithium-ion rechargeable batteries are limiting the distance that electric cars can travel. Researchers from the University of Maryland, the U.S. Army Research Lab and the Argonne National Laboratory have teamed up to change this. The team set out to create a more reliable rechargeable battery. The new batteries have been able to charge and discharge many times over without losing its ability to provide consistent and reliable energy. The new batteries could hold 93 percent battery capacity after 1,000 charge cycles. During testing, the batteries were in a coin shape, like a watch battery.

The Carnegie Institution for Science has found 12 new moons orbiting the largest planet in our solar system, Jupiter. The group found 11 normal outer moons and one the group calls an “oddball” bringing the total number of known moons around Jupiter to 79 — the most of any planet in the solar system. Two of the new moons are part of the inner group of moons that orbit in the prograde of Jupiter, or in the same direction as the planet’s rotation. The scientists said one oddball moon named Valetudo may be the last remaining remnant of a once larger prograde-orbiting moon that formed some of the retrograde moon groupings during past head-on collisions.

The complete story can be found on the Enginerring360 website. You may also want to check out Electronics360 for more news and information like this – plus engineering reference guides, product spec sheets and videos of interest.