NASA’s New Horizons spacecraft will kick off 2019 with another historic encounter: it will fly within 2,200 miles of Ultima Thule, a mysterious object in the Kuiper Belt. If the mission succeeds, Ultima Thule will become the most distant object humans have explored.

The New Horizons team chose an appropriate nickname for this speck of ancient planetary matter, officially 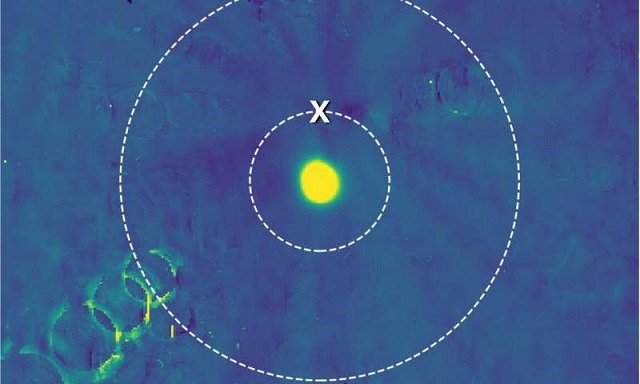 Ultima Thule (bright yellow spot in center. Source: NASA/Johns Hopkins Applied Physics Laboratory/Southwest Research Institutenamed 2014 MU69, from among 34,000 names suggested by the public in an online contest. Forty people nominated Ultima Thule, a mythical far-northern island in medieval literature and cartography that is a symbol for a place beyond the known world.

Launched in 2006, plutonium-powered New Horizons’ mission is to study two previously unexplored parts of the solar system: Pluto and its moons, and the Kuiper Belt, a vast band of cosmic detritus left over from the solar system’s formation. In 2007, the craft captured images of Jupiter and four of the giant planet’s moons on its way to its successful 2015 rendezvous of Pluto. New Horizons entered the Kuiper Belt before it reached Pluto, when it traveled beyond Neptune’s orbit. The encounter with Ultima Thule will be its first opportunity to study an object from such a close vantage point.

The Hubble Space Telescope discovered Ultima Thule in 2014, as its official name suggests. Scientists selected Ultima for further study because they know its birthplace; the object’s circular orbit indicates that it formed at its current distance from the sun. Knowing the object’s birthplace indicates that it is a sample of matter from the early solar system and that it has been well-preserved in temperatures approaching absolute zero.

Alan Stern, project principal investigator, commented that, “it is important to us in planetary science because this region of the solar system, being so far from the Sun, preserves the original conditions from four and a half billion years ago."

Since its discovery, astronomers have continued to study Ultima through both earth- and space-based telescopes, determining its width (30 miles), its albedo (about 10%) and its color (red). Its shape is yet to be determined, although recent observations suggest that it is an elongated sphere – or perhaps two separate chunks of matter altogether. Scientists also cannot determine if Ultima is rotating.

Even though Ultima is more ordinary than New Horizons previous subjects, mission scientists believe it has much useful information about to offer about the early solar system. One question is how gas and dust come together to form planets. Another is how Ultima and its Kuiper Belt neighbors all appear to be the same color.

New Horizons has successfully navigated the solar system thus far, but the craft is entering a neighborhood with unseen hazards. Its speed of 32,000 miles per hour – almost a million miles per day – leaves it vulnerable to encounters with even the smallest debris. A hazard watch team, formed in 2011, searches for potential obstacles but thus far the path appears to be clear. Scientists will learn whether the craft survives intact on January 1.

NASA and the Johns Hopkins University’s Applied Physics Laboratory, which has managed the project for NASA, are planning a number of telecasts on NASA TV and nasa.gov starting December 28, with a preview of planned science operations, continuing on January 1 with coverage of signal acquisition and winding up with press briefings on science results January 2 and 3. Given the distance separating earth from Ultima Thule no image simulcasts are planned. NASA will release initial images on January 2.

By posting a comment you confirm that you have read and accept our Posting Rules and Terms of Use.
Advertisement
RELATED ARTICLES
Ultima Thule spins like a propeller: NASA
NASA’s Kilopower Nuclear Reactors Could Power Future Martian Habitats
Spacecraft Will Snatch a Piece of an Asteroid and Return it to Earth in Daring Maneuver
NASA's Parker Solar Probe Set to Approach the Sun
Watch: 3D-Printing Satellites in Space, Diamond Rain on Neptune and Uranus and the Death of the 19-Year-Old Cassini Spacecraft
Advertisement