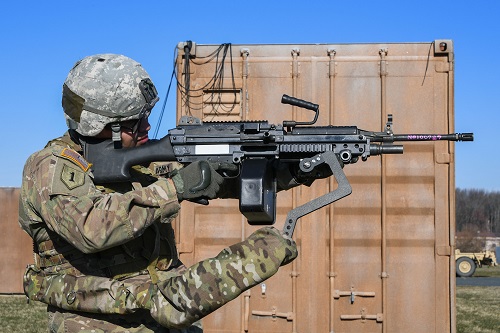 Researchers at the U.S. Army Research Laboratory (ARL) have developed a new system that helps to improve the lethality of soldiers by giving them a third arm that can help distribute the weight load of a heavy weapon.

"It can help stabilize the weapon and take the load off of their arms," said Dan Baechle, a mechanical engineer at ARL. "It's made from composite materials to make it as light as possible, but also to ensure the range of motion that soldiers need."

ARL tested the third arm with the M249 and M240B machine guns that weigh about 27 pounds and were able to show that it was able to take the weight of that weapon completely off the soldier’s arms.

The initial versions of the system didn’t make it possible for soldiers to go into a prone position, but the newer version was tested using an M4 type weapon allowing soldiers to dive into a prone fighting position from a sprint.

"Right now it's a prototype device, and it's a fairly early stage prototype device," Baechle said. "It's been getting a lot of interest higher up in the Army, but also online with some of the stories that have come out. We're using some of the interest to help motivate further development of the device."

The third arm is part of the army’s Modernization Priorities that include enhancing soldier’s lethality, which spans all fundamentals of shooting, moving, communicating, protecting and sustaining.

By posting a comment you confirm that you have read and accept our Posting Rules and Terms of Use.
Advertisement
RELATED ARTICLES
Augmented Reality and Micro-displays Change How Soldiers View the Battlefield
How exoskeletons can boost Army soldier’s performance
Exoskeleton Technology Takes a Step Forward
US Army develops robot to work alongside soldiers
Army Researchers Develop Facial Recognition that Works at Night
Advertisement