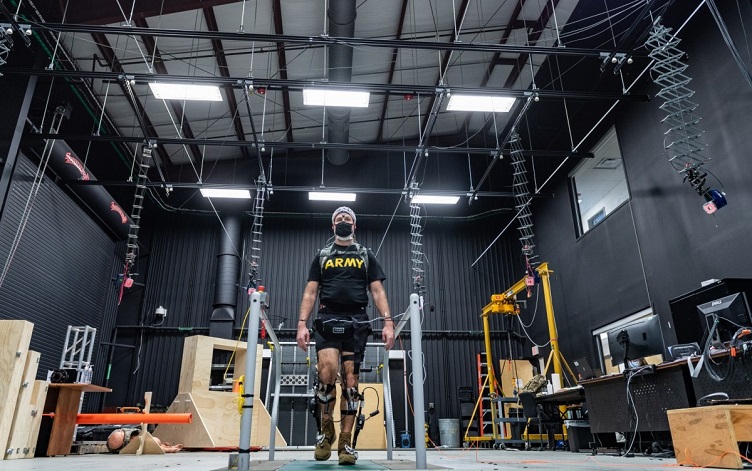 An Army Sergeant dons the ExoBoot as part of the ARL study on how humans and autonomous systems adapt to each other. Source: ARL

The study uses an adaptive exoskeleton boot, called the Dephy ExoBoot, which operates in sequence with a soldier to assess a spectrum of perceptions that characterize the boot as working naturally or with difficulty. ARL developed the exoskeleton to explore how intelligent agents could be potentially valuable to Army operations.

“Intelligent agents are rapidly becoming more prevalent for many applications and are expected to work in conjunction with humans to extend the team capability,” said J. Cortney Bradford, research scientist, U.S. Army Combat Capabilities Development Command (DEVCOM) at ARL. “For optimal performance of the team, the human and agent must rapidly adapt to each other as well as the changing operational dynamics and objectives.”

The goal of the study is to uncover brain signals, muscle signals, movement profiles and walking performance metrics that can track soldiers as they interact with the exoskeleton. Understanding how the shape of the adaptive agent and the human body interact is critical to how best to fit an exoskeleton to a soldier’s body.

“This will both improve our understanding of how humans adapt to intelligent systems, but also these signals carry information that could be used to help train the agent,” Bradford said. “These signals could give the exoskeleton a better understanding of the human at any moment so that it can make better decisions on how to assist the human.”

The Dephy ExoBoot gives assistance at the ankle joint while soldiers perform physical tasks such as walking with a heavy rucksack. While walking is a relatively easy task, a soldier generally carries heavier loads including equipment used in the field.

The ExoBoot is not controlled by the user or other human operator. Instead, it has an internal computer that serves as a controller that must figure out on its own how and when to assist the person wearing the ExoBoot.

The exoskeleton uses mechanical sensors and machine learning to determine things like how and when to aid the user. During walking, the exoskeleton determines whether the user is walking as opposed to running or skipping. Timed assistance is based on gait changes brought on by user fatigue, walking speed, load carriage or even terrain change.