Radiation oncologists have to review medical images of a cancer patient’s tumors before they can start radiation therapy. Doctors need to know exactly what the volume of a tumor is before they can start putting together a treatment that works for each patient. The analysis needs to include the regions of the skin and muscles that could be hiding the cancerous cells. 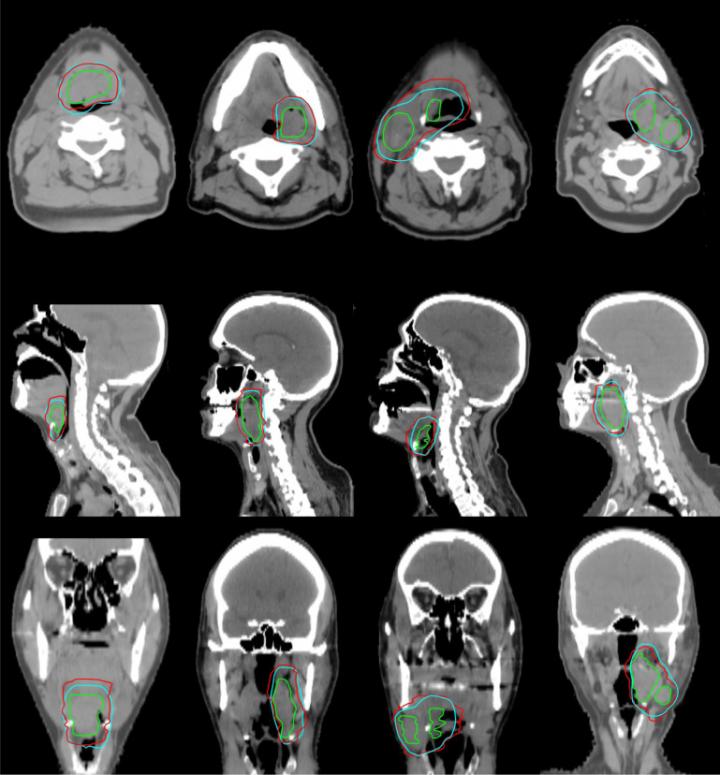 This process, called contouring, is used to establish how much radiation a patient needs to receive. For example, with head and neck cancer this process is sensitive because there is vulnerable tissue around the tumors.

A study from Utrecht University has found a wide range in how physicians contoured a patient’s computed tomography scan (CT scan). Some doctors have suggested high-risk clinical target volumes that are eight times larger than their colleagues' estimates.

Carlos Cardenas from the University of Texas and his team have created a new method that automates the contouring of high-risk clinical target volumes with the help of artificial intelligence and deep neural networks.

The new work focuses on taking a doctor's decision-making process and turning it into a computer program.

"We have a lot of clinical data and radiation therapy treatment plan data at MD Anderson," Cardenas said. "If we think about the problem in a smart way, we can replicate the patterns that our physicians are using to treat specific types of tumors."

The study analyzed data from 52 oropharyngeal cancer patients treated at MD Anderson between January 2006 and August 2010, who have had their gross tumor volumes and clinical tumor volumes contoured for radiation therapy treatment.

"For high-risk target volumes, a lot of times radiation oncologists use the existing gross tumor disease and apply a non-uniform distance margin based on the shape of the tumor and its adjacent tissues," Cardenas said. "We started by investigating this first, using simple distance vectors."

Cardenas started this project in 2015. The research team accumulated a lot of information very quickly. This is where the deep learning came in. Cardenas used deep learning to mine the data and uncover the unwritten rules that have been guiding the doctor’s decisions.

The deep learning algorithm uses auto-encoders to identify and recreate physician contouring patterns. The model uses the gross tumor volume and distance map information from surrounding anatomic structures as the inputs. It classifies the data in order to identify voxels that are part of the high-risk clinical target volumes. Head and neck cancers are typically treated with different volumes for high, low and intermediate risk. The research focused on automating the target for high-risk areas.

The team tested the method in some cases that were left out of the training data. This research found that the results were comparable to the results from trained oncologists. The predicted contours agreed closely with the ground truth. This means it is promising for use in doctors offices and hospitals.

Currently, a radiation oncologist could take two to four hours to determine clinical target volumes. Other doctors then review the oncologist's work to confirm that nothing has been missed. The new method could decrease this time significantly.

The team used the Maverick supercomputer at the Texas Advanced Computing Center (TACC) to produce clinical target volumes in less than a minute. Training the system was the longest part of creating the new method, but even that helped speed up the research.

"If we were to do it on our local GPU [graphics processing unit], it would have taken two months," Cardenas said, "But we were able to parallelize the process and do the optimization on each patient by sending those paths to TACC and that's where we found a lot of advantages by using the TACC system."

"In recent years, we have seen an explosion of new projects using deep learning on TACC systems," said Joe Allen, a research associate at TACC. "It is exciting and fulfilling for us to be able to support Carlos's research, which is so closely tied to real medical care."

The project is intended to help low-and-middle income countries where expertise on contouring is rarer but it will also be helpful in the U.S.

"I think it's going to change our field. Some of these recommended systems are getting to be very good and we're starting to see systems that can make predictions with a higher accuracy than some radiologists can. I hope that the clinical translation of these tools provides physicians with additional information that can lead to better patient treatments,” said Cardenas.

The paper on this research was published in the International Journal of Radiation Oncology*Biology*Physics.