Researchers Use Oxygen-filled Microbubbles to Weaken Tumors' Resistance to Radiation

Researchers are always trying to find a cure for cancer or, at the very least, develop more effective ways of eradicating cancer in the body. The most recent discovery was developed by researchers from Thomas Jefferson University and Jefferson’s Sidney Kimmel Cancer Center. The research team discovered that injecting breast cancer cells in the body with microbubbles that are filled with oxygen forces the tumors to become more sensitive to radiation therapy. In studies, this technique improved survival rates significantly when tested on animals. 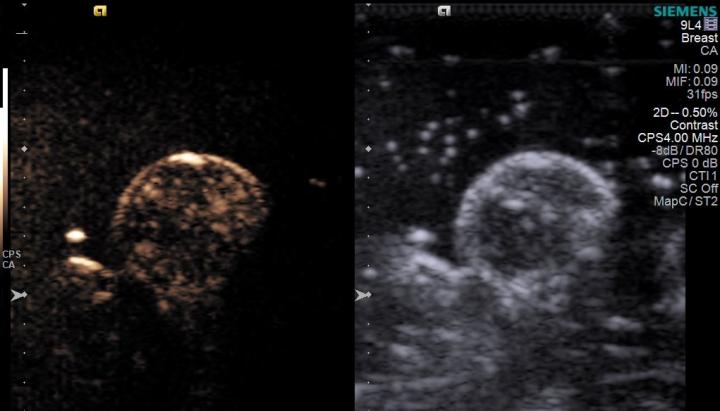 This is an image of a round breast tumor with oxygen microbubbles spread throughout the tumor (gold dots or clouds) in an animal model of the disease. (Source: John Eisenbrey lab, Thomas Jefferson University)

The first microbubbles were developed for ultrasound imaging in pregnant women. Researchers found that they were able to pop oxygen-filled microbubbles in tumors by using ultrasound beams. This discovery peaked researchers’ interest to use the technique in breast cancer treatments. Oxygen-deficiency is commonly found in solid tumors. Tumors tend to outgrow the supply of oxygen-carrying blood vessels that are part of the tumor. Oxygen-deficiency means that tumors can develop a resistance to chemoradiation. By filling the tumors with oxygen, it makes the tumors weaker to radiation.

Before starting radiation therapy in mice, the research team popped oxygen microbubbles using an ultrasound beam. This was proven to triple cancer’s sensitivity to radiation, which led to a doubled survival rate in mice.

"The very act of bursting these microbubbles within the tumor tissue seems to change the local physiology of the tumor and make cells generally more permeable to oxygen and potentially to chemotherapy as well," said Eisenbrey. "We think this is a promising approach to test in patients to amplify the effects of radiation therapy."

The paper on this research was published in the International Journal of Radiation Oncology Biology Physics.

Re: Researchers Use Oxygen-Filled Microbubbles to Weaken Tumors' Resistance to Radiation
#1

Interesting article. Certainly, any advancements in the treatment of tumors and cancers are always most welcome.