Analysis by the U.S. Department of Energy’s National Energy Technology Laboratory (NETL) says that continued retirement of fossil fuel power plants could have an adverse impact on the nation’s ability to meet power generation needs during future severe weather events.

It says that during the winter storm that struck much of the eastern United States between Dec. 27, 2017, and Jan. 8, 2018 coal provided "a majority of the daily power generation required to meet the emergency."

Peter Balash of NETL’s Energy Systems Analysis team, says the study showed that “coal was the most resilient form of power generation during the event and that removing coal from the energy mix would worsen threats to the electrical grid’s dependability during future severe weather events.”

The report warns against "overestimating the nation’s ability to respond to weather events if the current rate of coal plant retirements continues."

The report says that during the worst of the storm, Jan. 5–6, 2018, “U.S. electricity market experience demonstrated that without the resilience of coal plants — its ability to add 24-hour baseload capacity — the eastern United States would have suffered severe electricity shortages, likely leading to widespread blackouts.” 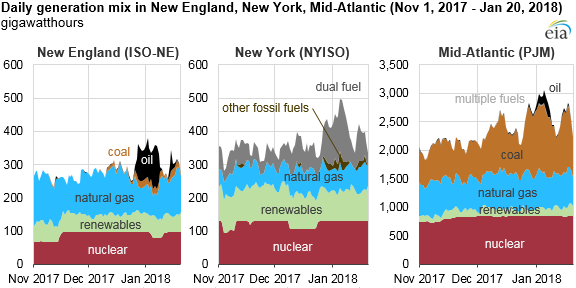 By posting a comment you confirm that you have read and accept our Posting Rules and Terms of Use.
Re: Coal Plants Were Key During Bomb Cyclone: DOE Report
#1

Just read that Saudi Arabia has just signed up a memorandum of understanding to commit 50billion to building 200giga watt renewable energy plants in the country by 2030 ! If a country with the carbon based energy reserves of Saudia Arabia can see the value of solar and wind energy with battery storage to build an energy reserves like it plans for soverian supply plus the power export for the future it seems crazy to even bother arguing for a place for coal even on a minor role as it won't ever be able to compete economically because once the units are complete the energy supply is just about free sun and wind cost us nothing not so ever with coal or gas which you will always have to supply and pay for forever also solar power and wind power generating plants will always be cheaper to build

Re: Coal Plants Were Key During Bomb Cyclone: DOE Report
#2
In reply to #1
Brave Sir Robin

Solar and wind generation capital costs are about twice to 2.5X that of advanced natural gas combined cycle (most efficient) plants.