The Race to Deploy Devastating Hypersonic Railguns Heats Up

Railguns are one of the most devastating weapons conceived, capable of shooting hypersonic bullets with enough energy to liquefy even the toughest armor. These electromagnetic guns accelerate super-dense metal shells to upwards of Mach 6, or six times the speed of sound (4,570 mph; 7,350 kph), launching them on precise hundred-mile-long trajectories to inflict destruction on any unfortunate targets in their path. 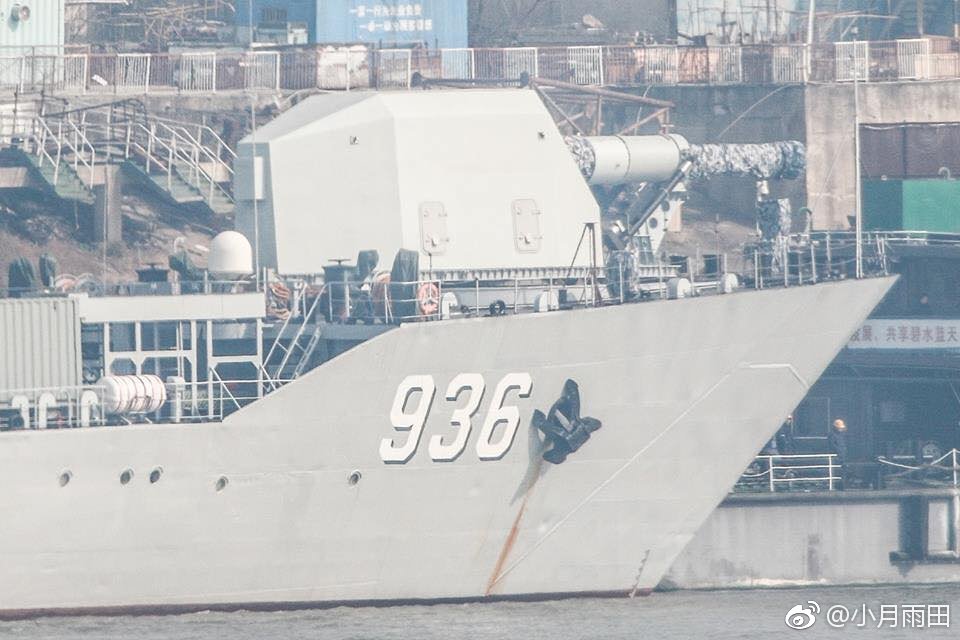 The suspected railgun mounted on the bow of China’s type 072III-class landing ship, the Haiyang Shan. Source: Dafeng CaoThe country to first operationalize these prototype weapons may enjoy a significant strategic advantage. And China just took an important step toward that goal. The Asian nation became the first to mount a railgun on a ship, beating the U.S. Navy to that feat by installing one on a People’s Liberation Army Navy (PLAN) warship.

A PLAN observer posted photos of the ship-mounted weapon on Twitter. In the images, the type 072III-class landing ship, the Haiyang Shan #936, had a giant new turret installed on its bow in place of the usual twin-barrel H/PJ76F 37 mm anti-aircraft turret. Speculation by a former PLAN officer indicated that the retrofit probably occurred at the navy’s biggest inland shipyard, Wuchang, located in Hubei province in central China.

The railgun’s wide barrel is seen jutting out of a bulky, enclosed turret shielding what might be the electromagnetic apparatus required to accelerate the weapon’s projectiles to lethal speeds. From the rear of the turret housing to the muzzle of the barrel, the railgun measures around 65 feet in length, with the 12-20 inch diameter exposed barrel measuring around 33 feet long. The barrel is unusually wide compared to conventional powder guns, providing space for the parallel magnetic rails that propel the weapon’s ammunition.

The deck of the ship also contains a number of containers housing what might be the capacitors and other equipment necessary to power the weapon.

Railguns destroy targets with kinetic energy instead of the explosive forces of conventional bombs and missiles. Projectiles are propelled to great speeds by high-power electromagnetic energy instead of explosive chemical propellants. To achieve this, a very large current is passed through two parallel rails that are electrically coupled by an armature holding the projectile. The resulting magnetic field pushes the projectile forward at great velocity, launching projectiles farther and faster than any previous gun technology. Each round fired requires enormous electrical energy. Nevertheless, pulsed-power systems are in development to enable multi-shot salvos within a short time frame.

The railgun’s long-range, high-velocity power amplifies the combat capabilities of the military that wields it. The weapon’s applications are wide-ranging and include cruise and ballistic missile defense, anti-surface warfare, long-range fire support and time-critical strikes. 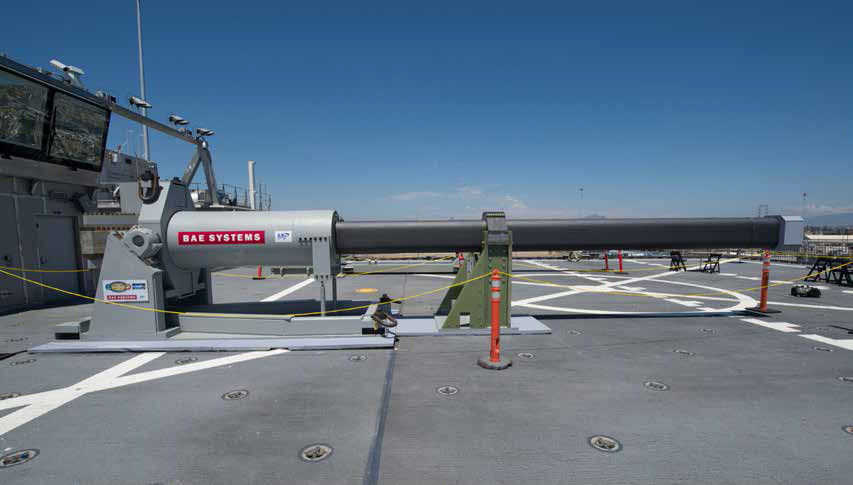 The United States has long been considered the leader in railgun technology, although its primacy could be in question if China successfully test-fires its recently ship-mounted railgun. America’s Electromagnetic Railgun Innovative Naval Prototype (INP) has been in development since 2005 with defense contractors General Atomics and BAE Systems. First fired on December 10, 2010, BAE Systems’ railgun is designed to fire shots with 33 Megajoules of energy to a range of 100 nmi (185 km) with a muzzle velocity as high as Mach 7.5 and a target impact velocity of Mach 5.

A video from phase 2 of the INP program released in July 2017 showed the tactical electromagnetic railgun demonstrator shooting two shells within 25 seconds, representing a firing rate of 4.8 shells per minute. The footage demonstrates that the railgun prototype is progressing toward a requirement outlined by Naval Sea Systems Command in 2013 for a weapon system that can fire up to 10 shells per minute with storage for up to 650 projectiles.

The railgun itself is only one component of a fully operational weapon system. In order to fire the gun at sea, a vessel is needed that has the power generation capacity as well as the electrical infrastructure to meet the enormous power requirements of the railgun. Fortunately for the U.S., its next-generation Zumwalt electric warship, commissioned on October 15, 2016, fits the bill. 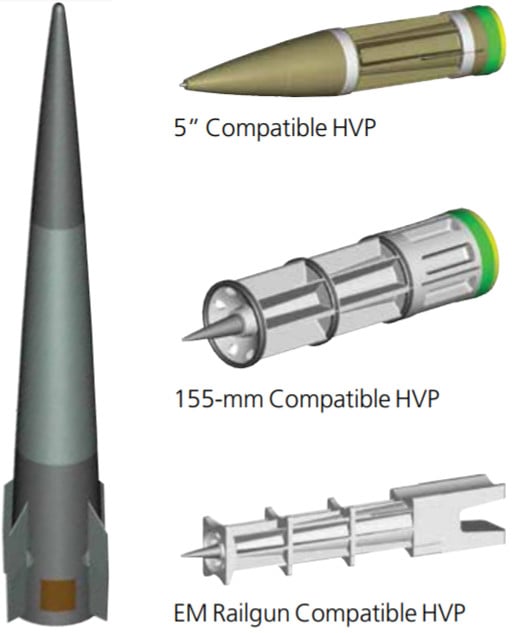 Variants of the guided, low-drag Hyper Velocity Projectile are in development for both railgun systems and conventional artillery. Source: BAE Systems

The ammunition a railgun fires is just as important as the weapon itself. Designing the shells to optimize aerodynamic performance will enable them to fly farther and faster, increasing their lethality upon impact. To complement the prototype railgun BAE Systems is developing for the U.S. Navy, the company is also working on the Hyper Velocity Projectile (HVP). Equipped with accurate guidance electronics for in-flight maneuverability, the HVP features a low drag aerodynamic design enabling it to fly at high velocity and decreasing time-to-target. Not limited to use only with electromagnetic railguns, variants of the HVP are also in development for conventional artillery like the Navy’s 5-inch (127-mm), 62-caliber Mk 45 Mod 4 gun system, as well as the 155-mm Advanced Gun System (AGS).

Weapons development programs in the U.S. live or die based on the financial backing they receive from the government. Recently, funding priorities have shifted from the railgun demonstrator to the ammunition it fires. The Department of Defense’s (DoD) Strategic Capabilities Office (SCO) recognized in 2015 that a slightly modified HVP could be fired from existing powder gun systems at faster speeds and farther ranges than conventional unguided rounds. Since then, development of the railgun has been put on the back burner in favor of accelerating the HVP’s path to deployment for traditional artillery.

But China’s aggressive railgun advances — fielding the electromagnetic weapon on one of its warships years before the U.S. Navy was projected to accomplish a similar task — may spur high-level decision makers at the DoD and SCO to shift budget priorities so that the U.S. can catch up.

By posting a comment you confirm that you have read and accept our Posting Rules and Terms of Use.
Re: The Race to Deploy Devastating Hypersonic Railguns Heats Up
#1

Re: The Race to Deploy Devastating Hypersonic Railguns Heats Up
#2
In reply to #1
MNIce

Hypersonic aerodynamics are a bit different from the subsonic regime. Shock wave management and the area rule dominate design. Another consideration is the acceleration force of the launch and the necessary pressure on the back of the projectile. It would not do to have it spall apart in the launcher.