Space Weapons Versus Firearms: Can You Fire a Gun in Space? 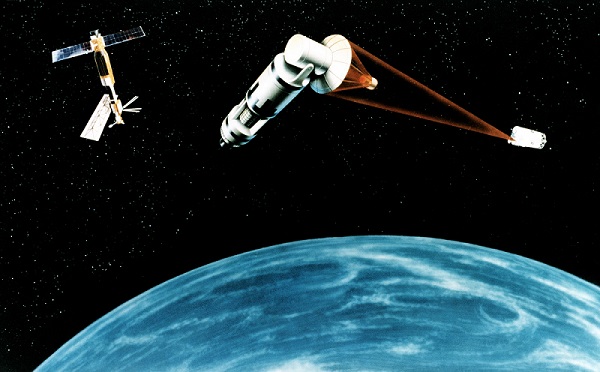 An artist's conception of an SDI laser weapon.

Space warfare is so common in sci-fi literature, TV shows and films that many would not be surprised to hear about the successful development of a true space weapon. Whether that weapon takes the form of a Star Wars proton torpedo or a Star Trek photon torpedo can be debated by sci-fi superfans.

While there is no widespread use of space weapons in the real world, some military leaders see space as a vast potential combat zone. Because of this vastness, however, it’s helpful to define the regions of outer space and discuss their military potential separately.

Near space is the atmospheric region between 20 and 100 kilometers (65,000 to 328,000 feet) above sea level. Near space altitudes are higher than air space used by most jets but lower than orbiting satellites and are mostly dominated by scientific balloons. While no near-space weapons or combat equipment exist, Air Force Lt. Col. Mel Tomme proposes that the region has many advantages for military operations. Near-space surveillance equipment, for example, could cover a much greater communications area when compared to lower-altitude communications. And a major advantage of conducting operations in near-space is that these altitudes are above the troposphere, where most disruptive weather occurs. Proponents like Tomme envision weapons armed near-space balloons that could expand the horizons of air combat.

Like near-space types, true space weapons have remained experimental in nature. They are typically classified based on the weapon’s location or position.

Earth-to-space weapons have seen the most practical development. China, Russia, the U.S. and other countries are working to develop anti-satellite weaponry, including jammers, lasers and microwave gun systems. Jammers effectively disrupt satellite communications using various methods, including transmission of noise signals to override the satellite signal. Ground-based lasers can be used to blind imagery satellites, and microwave guns could destroy satellite circuits or disrupt guidance systems.

Other SDI weapon designs included unique ground/space hybrids, in which a ground weapon would emit a directed-energy blast toward a mirrored satellite, which would then magnify the blast and direct it at a space-based target. Despite the promise of these weapons, most SDI projects were canceled as the Cold War de-escalated, and the entire SDI organization was converted into the Ballistic Missile Defense Organization (BMDO) in 1994.

Orbital bombardment is a theoretical strategy that involves attacking targets on a planet or moon from the object’s orbit rather than from an aircraft. The Soviet Union developed the Fractional Orbital Bombardment System (FOBS) in the late 1960s. The system involved placing a nuclear warhead in low-Earth orbit — the missile could then be de-orbited at any time to strike a ground-based target. The only missile tested for FOBS was 8K69, a non-nuclear warhead launched in 1968. The Soviet Union never launched a nuclear warhead because the Outer Space Treaty prohibited space-based nuclear missiles, and the SALT II treaty of 1979 prohibited the system altogether.

SALT II allows the use of conventional warheads in orbit, however, and the United States has proposed a kinetic orbital bombardment system involving tungsten carbide/uranium cermet rods dropped from space. This system has not yet been tested, and the rods’ heavy mass makes them difficult to transport into orbit. 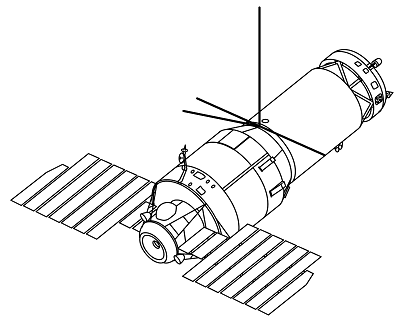 The Salyut 3 spacecraft.While it’s more exciting to imagine lasers and microwave guns in space warfare, it is possible to fire a conventional firearm in space. In fact, a gunpowder-based firearm would work slightly better in space than on Earth. First, the vacuum present in space would have no effect on a firearm because a bullet containing gunpowder does not require oxygen to fire. The vacuum also creates an advantage for the firearm because there is no air to slow down the bullet, so a firearm in space has a theoretically infinite range.

The Almaz program — a secret Soviet space station initiative begun in the 1960s — produced the only armed spacecraft in history. The three Almaz stations — Salyut 2, Salyut 3 and Salyut 5 — were equipped with a specially designed gas-powered Rikhter R-23 autocannon. The R-23 was notable for using unconventional ammunition: its 261P cartridges were enclosed in a galvanized steel casing and fed rearward into the chamber, unlike conventional rounds fed from the rear and rammed forward into the chamber.

The R-23 was test-fired in 1974 just before Salyut 3’s deorbiting. While sources differ as to whether the gun fired three shots or its entire magazine, this represents the only known firearm discharge in space.

While the bulk of space weapons research ceased at the end of the Cold War, many technologically advanced countries are still investing in space weapon research. It remains to be seen whether the first practical space weapon materializes as a firearm or a laser, if it materializes at all.

Re: Space Weapons Versus Firearms: Can You Fire a Gun in Space?
#1

Gun in space: For action, there's an equal opposite reaction. So, be sure you know where you're going to go backward towards as the bullet exits the opposite direction.

Re: Space Weapons Versus Firearms: Can You Fire a Gun in Space?
#2

What about 20 tons of sand in a contra-rotating orbit? Vorsprung durch Technik...

Re: Space Weapons Versus Firearms: Can You Fire a Gun in Space?
#3

Good game great graphics fun to play free online klondike solitaire one of the best game I have played i like this game it very relaxing.