On January 29, workers began modifying the Davis Cavern in Lead, South Dakota to accommodate the LUX-ZEPLIN dark matter detector. LUX-ZEPLIN is a major expansion of the first LUX detector that originally occupied Davis Cavern. It features seven metric tons of liquid xenon — almost 19 times more than its predecessor — and over 700 photomultiplier tubes. The entire device will be buried a mile underground to shield it from surface radiation.

The LUX-ZEPLIN is an impressive feat of engineering, to be sure. But its existence hinges on the fact that its predecessor ran for nearly two years but found no evidence of dark matter. LUX-ZEPLIN is one of dozens of dark matter detectors, many of which differ in design and fundamental detection strategy. Years of fruitless searching begs the question: What is the current state of dark matter detection, and why are scientists building so many detectors to find a hypothetical particle proving the existence of a hypothetical material?

What is dark matter? Science itself is unable to answer this question with any certainty. “Dark matter” is a placeholder term for whatever material is unaccounted for by standard cosmology models. Current science holds that ordinary matter makes up less than five percent of the universe’s total mass-energy, so the 85 or so percent of the universe with no known origin may be a combination of dark matter and dark energy.

Dark matter and dark energy bring with them some controversy due to their hypothetical nature. Dark matter has never been directly observed, and some scientists are in favor of amending general relativity laws rather than search for a mysterious material which may or may not exist. While most mainstream researchers agree that dark matter exists, some take issue with its name. In a June 2017 talk, well-known astrophysicist and public intellectual Neil deGrasse Tyson explains his belief that using the term “matter” can mislead researchers into searching for dark matter particles that coincide with science’s understanding of the material world, but this may not be true. In attempting to explain the existence of a large cosmological measurement gap, Tyson believes a term like “dark gravity” would be more accurate and appropriate.

It follows that the best way to prove that dark matter is in fact matter is to detect its hypothetical particles. These particles are classified as non-baryonic matter and include axions, neutrinos and weakly interacting massive particles (known by the mildly insulting acronym WIMP). Scientists contrast these with baryonic matter particles — such as protons and neutrons — that make up conventional matter.

Scientists use two different methods to detect non-baryonic matter: direct detection, which discovers dark matter particles that scatter off atoms within the detector itself, and indirect, in which detectors search for existing particles formed by dark matter decay or destruction. 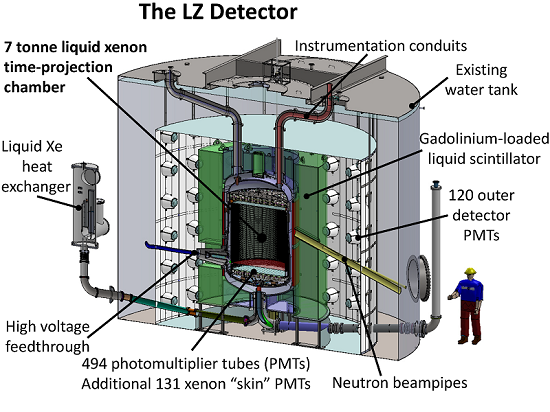 The LUX-ZEPLIN project design. Particle interactions in the massive xenon chamber are detected and analyzed by hundreds of PMTs. Source: Berkeley Labs

Direct detection methods rely on the theory that dark matter is continuously passing through our more familiar Earth matter. These devices attempt to observe energy emitted as a result of collisions between nuclei and dark matter particles.

Direct detection experiments are classified into two categories — cryogenic and noble liquid — based on their detector technologies. Cryogenic detectors operate at extremely cold temperatures and detect the heat theoretically produced when a dark matter particle strikes an atom in a crystal absorber. Noble liquid detectors work in a similar way but use a noble gas like xenon or argon to detect luminescent scintillation after a particle collision. Regardless of the detector type, direct detection experiments operate buried underground to avoid interference from terrestrial cosmic rays.

Dozens of direct detection experiments are underway, and each detector has a unique design and detection method. The LUX-ZEPLIN experiment mentioned above and the XENON project in Italy’s Laboratori Nazionali del Gran Sasso are both noble liquid experiments that function as time projection chambers. They consist of a large volume of noble gas surrounded by banks of photomultiplier tubes (PMT). Particle interactions that produce scintillation within the gas are detected by the PMTs as the first signal, and electrons accelerated by a provided electric field is then generated as a second signal. The time between the signals is used to construct a representation of particle interaction within the gas.

The Cryogenic Dark Matter Search (CDMS), a highly sensitive cryogenic experiment currently located in northern Minnesota, employs a different strategy. CDMS detectors monitor germanium and silicon crystal substrates and analyze the ionization and phonons produced by particle interactions. By comparing the ratio to ionization and phonon signals, researchers can determine whether the signals were caused by electrons or WIMPs. CDMS has recorded a number of possible WIMP detection events, none of which provided completely conclusive evidence for the existence of dark matter. 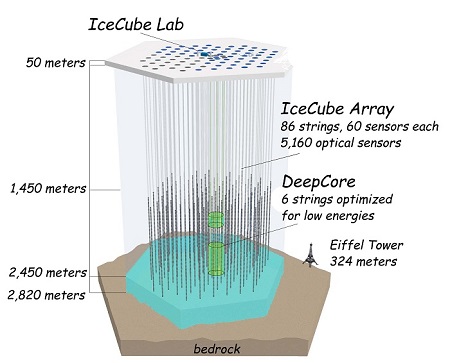 The IceCube neutrino telescope located at the Amundsen-Scott Station in Antarctica. IceCube is a massive installation, and dwarfs the Eiffel Tower as shown in the image. Source: Berkeley LabsIndirect Detection

Indirect detectors attempt to find evidence of dark matter particles in space, and most experiments therefore use some form of telescope. Indirect detection searches for signals like gamma rays, neutrinos or positrons that could be byproducts of dark matter annihilation somewhere in the universe.

The signals described above could also be produced by other astrophysical sources, so a single detected signal does not necessarily indicate the presence of WIMPs. That said, a number of indirect detectors have found some potentially significant discoveries:

With so many large projects working to positively discover evidence of dark matter, scientists have an increasingly good chance of proving its existence, if it does in fact exist. Dark matter is on the cutting edge of physics knowledge and is highly theoretical, so it’s difficult to predict how its discovery will play out. Confirmed detection of WIMPs or other particle interactions may cement dark matter as an actual material, or science may shift gears and re-classify it as dark gravity or a similar concept. Only time will tell.

By posting a comment you confirm that you have read and accept our Posting Rules and Terms of Use.
Advertisement
RELATED ARTICLES
Massive Dark Matter Detector Project Breaks Ground in South Dakota
7 Materials that Only Exist or are Made in Space
Supercomputer Performs Largest-ever Virtual Universe Simulation
The LHC Successfully Accelerated Its First Atoms
Advances in imaging with neutrons
Advertisement