The LUX-ZEPLIN (LZ) project is now under construction in Lead, South Dakota. The project looks to build a dark matter detector utilizing seven tonnes of liquid xenon, all located nearly one mile underground.

The original LUX detector is a time projection chamber using 370 kg of liquid xenon. Interactions in the xenon generate 175 nm photons comprising the first signal, which is then detected by two arrays of 61 photomultiplier tubes (PMT). Electrons also produced by the xenon interactions eventually generate electroluminescent photons detected as the second signal. The time between the two signals is used to analyze particle behavior and possibly detect WIMPs. 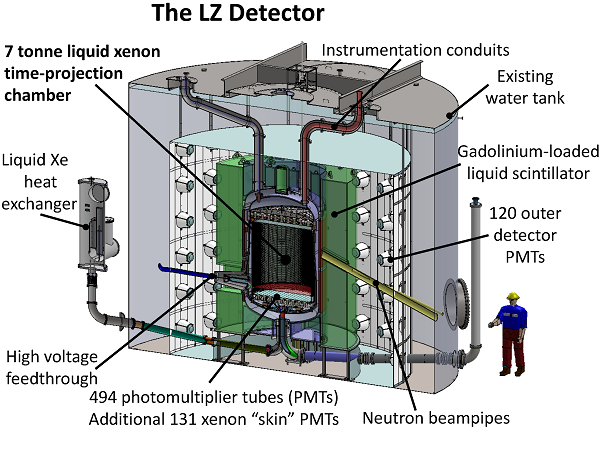 Both detectors are designed to operate deep underground because the layers of earth above the devices shield them from cosmic rays and radiations, which may interact with the xenon. They are also surrounded by a water tank for extra shielding.

The original LUX detector ran from October 2014 to May 2016 at four times its initial sensitivity but detected no signs of WIMPs. Data from LUX has helped scientists narrow some existing theories about WIMPs, however. The LUX-ZEPLIN’s larger xenon capacity and large amount of PMTs should give it enhanced sensitivity compared to the original detector.

The LZ project is a collaboration between 250 scientists from 37 institutions in the U.S., Russia, Portugal, Korea and the U.K. It became an official U.S. Department of Energy project in early 2015 and was approved for construction in February 2017. The Department of Energy and the U.S. National Science Foundation have selected LZ as one of three Generation-2 dark matter experiments.

By posting a comment you confirm that you have read and accept our Posting Rules and Terms of Use.
Advertisement
RELATED ARTICLES
The Current State of Dark Matter Detection
How Light Meters Operate
Video: CERN Celebrates the Highlights of 2017
The LHC Successfully Accelerated Its First Atoms
Watch: Robotic X-ray inspection improves cast automotive wheel production
Advertisement