A large supercomputer has been used by University of Zurich, Switzerland, researchers to simulate the formation of our entire Universe and to generate a gigantic catalogue of about 25 billion virtual galaxies from 2 trillion digital particles.

This catalogue is being used to calibrate experiments on board the Euclid satellite, which will be launched in 2020 with the objective of investigating the nature of dark matter and dark energy. The satellite will produce a tomographic map of our Universe, tracing back in time more than 10 billion years of evolution in the cosmos.

Astrophysicists developed and optimized a new code to accurately describe the dynamics of dark matter and the formation of large-scale structures in the Universe. The PKDGRAV3 code is designed to use optimally the available memory and processing power of modern supercomputing architectures, such as the "Piz Daint" supercomputer of the Swiss National Computing Center. The code was executed on this machine for only 80 hours, and generated a virtual universe of two trillion (i.e., two thousand billion or 2 x 1012) macro-particles representing the dark matter fluid, from which the catalogue of 25 billion virtual galaxies was extracted. 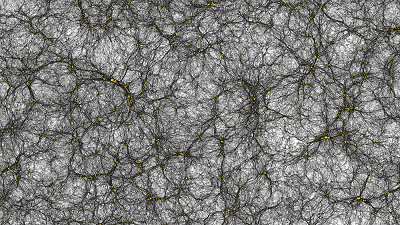 A section of the virtual universe, a billion light years across, showing how dark matter is distributed in space, with dark matter halos the yellow clumps, interconnected by dark filaments. Cosmic void, shown as the white areas, are the lowest density regions in the Universe. (Image: Joachim Stadel, UZH)

Thanks to the high precision of their calculation, featuring a dark matter fluid evolving under its own gravity, the researchers have simulated the formation of a small concentration of matter, called dark matter halos, in which galaxies like the Milky Way are believed to form. The challenge of this simulation was to model galaxies as small as one tenth of the Milky Way, in a volume as large as our entire observable Universe.

About 95% of the Universe is dark: about 23% of the cosmos consists of dark matter and 72% of dark energy. When the Euclid satellite captures the light of billions of galaxies in large areas of the sky, astronomers will measure very subtle distortions that arise from the deflection of light of these background galaxies by a foreground, invisible distribution of mass – dark matter.

By posting a comment you confirm that you have read and accept our Posting Rules and Terms of Use.
Re: Supercomputer Performs Largest-ever Virtual Universe Simulation
#1

So the virtual galaxies are represented by an average of just 80 particles each?

Quick answer to your question: Yes, 80 particles is indeed enough to identify the location and mass of a galaxy using the model. The actual properties of the galaxy placed within such a small halo are calibrated to match the current observations. This is a statistical challenge which allows room for improvement, but the current methods are already very sophisticated. What has to be remembered is that the underlying dynamics of the main "dark actors" in the universe (dark matter, dark energy, neutrinos) are being calculated fully self-consistently using the PKDGRAV3 code. This then provides a very accurate "scaffolding" for the distribution of the galaxies, whose properties still need to be set by a model. In the future supercomputers may be able to directly simulate the creation and evolution of galaxies within such large volumes of the Universe, but at present this impossible. So an appreciation of the enormous challenge presented to us by the visible Universe is needed to assess our work, which aims to get right all the physics we can simulate directly and to use the best models to match the remaining galactic properties. Keep questioning, and you are with us! Regards, Joachim Stadel.

Re: Supercomputer Performs Largest-ever Virtual Universe Simulation
#4
In reply to #3
truth is not a compromise

Dr. Stadel, thank you for personally answering this question. What a pleasant surprise.

At the college level anyway.

See the entire discussion on CR4, the Engineering Community
Advertisement
RELATED ARTICLES
Video: Tour the universe with this interactive map
IllustrisTNG: The Next Generation for Universe Simulation
Mapping the Origins of Stars and Galaxies
Explore the Universe with View Space
The Current State of Dark Matter Detection
Advertisement