An electric sports car was not the only curious artifact launched into space last Tuesday aboard the first test flight of SpaceX’s Falcon Heavy rocket. A small crystal disk etched with the words of a famous series of sci-fi novels also hitched a ride, stashed inside SpaceX CEO Elon Musk’s Tesla Roadster. 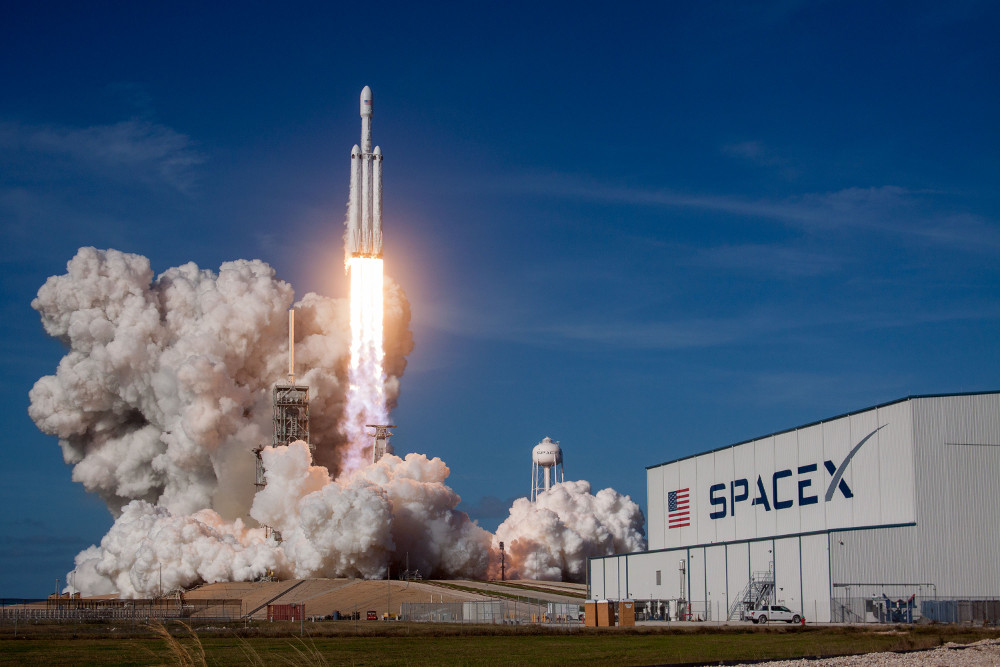 Arch libraries (pronounced: “Ark”) are durable data crystals produced with a new technology that can survive for billions of years — far longer than traditional storage methods.

They are created by the Arch Mission Foundation, an organization whose goal is to create a permanent archive of human knowledge. Disseminated across time and space and lasting billions of years, this library would preserve the collected culture and learning of humanity for the benefit of future generations — or even alien beings if our species is wiped out in an unfortunate disaster.

The library stored in Musk’s Roadster — Arch 1.2 — is the second of an initial batch of five Archs. The first Arch library — Arch 1.1 — resides in Musk’s personal library.

Fittingly, the libraries contain copies of Isaac Asimov’s "Foundation Trilogy," a set of novels about a mathematician who seeks to preserve and expand on humanity’s collected knowledge through a galactic dark age.

The information our species has generated so far is nearly all located in one central, vulnerable location: Earth. And today’s data storage media — DVD disks, flash drives, magnetic tape cartridges, paper books — are fragile, lasting only decades to a few hundred years at best.

The Arch Mission Foundation intends to establish durable, enduring libraries of data at various locations around the solar system and beyond using a variety of long-lasting storage media. The original set of five Archs is just the first step in this grand mission. 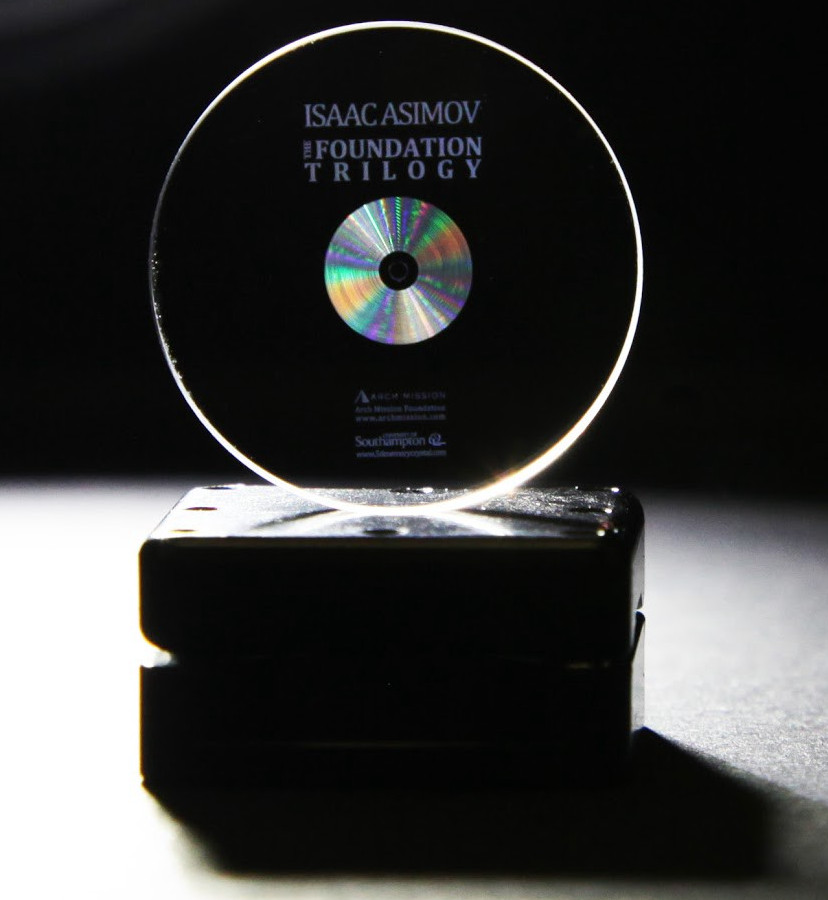 The first Arch library – Arch 00001:000001 – contains Isaac Asimov’s Foundation Trilogy. Source: Arch Mission FoundationThe goal is to create an eternal backup of human civilization to ensure our knowledge and culture is never lost or to guarantee its rediscovery. The mission also intends to prevent a future information monopoly. Scattered in many places across space, Arch libraries would be too numerous and widespread for any single entity to control access to them.

In addition to safeguarding human knowledge against extinction-level events, the Arch Mission Foundation sees another reason to build Arch Libraries. In order to advance to a successful spacefaring civilization, humanity must have data repositories durable enough to withstand the harsh environments of space and planetary surfaces, while remaining compact enough to carry vast sets of data wherever human explorers or colonists might travel.

Eventually, the Arch Library will be decentralized — spread to as many locations as possible, as well as indestructible — self-reproducing if parts of it are lost.

Arch 1.2 launched on the Falcon Heavy is the first piece of a planned Solar Library that will orbit the sun for billions of years. The Foundation intends to add to it in the future with the launch of additional Archs.

By 2020, the Foundation plans to land a Lunar Library on the surface of the Moon comprised of a compilation of the most significant information created by humanity, including photos, videos and documents.

In the not-too-distant future, it will also establish a Mars Library consisting of a copy of a substantial portion of Earth’s knowledge, including a duplicate of a significant part of the internet.

In addition, the Arch Mission will spread copies of the Arch Library around planet Earth, including underground, on the surface and in orbit.

The first Arch libraries are written in fused quartz with a new data storage technology. Known as 5D laser optical storage, the method was developed by Arch Mission Foundation advisor Dr. Peter Kazansky and his team at the University of Southampton.

Data is recorded with brief, intense pulses of laser light. The femtosecond laser pulses generate plasma disruptions in the quartz silica glass, resulting in self-assembled nanogratings. These nanostructured dots are etched within the material in multiple layers. Each adjacent spot is separated by a distance of 3.7 µm, with layers placed every 20 µm. 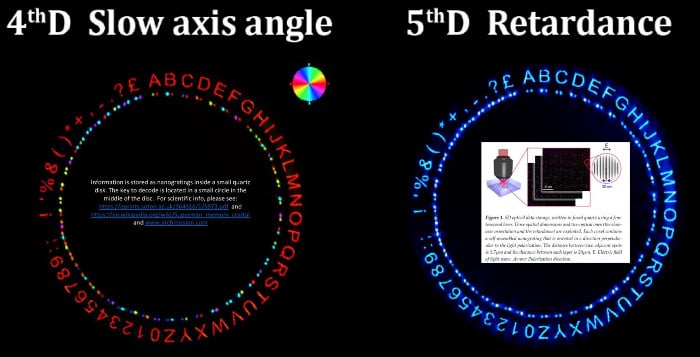 The decoding key necessary to decipher the digital data stored in the optical properties of nanogratings etched in the fused quartz of the Arch library launched on SpaceX’s Falcon Heavy rocket test. Source: Arch Mission Foundation

Data is stored in five dimensions, including two optical dimensions (slow-axis orientation and retardance) as well as the three spatial dimensions representing the 3D position of the nanostructures within the fused quartz.

The data can be read back using a microscope and polarizer along with a key situated in a small circle in the middle of the disk. The key matches up the optical properties of the nanostructured dots with the letters, numerals and symbols used in the English language.

Thermally stable up to 1,000 degrees Celsius, the quartz data crystals feature a lifetime of 13.8 billion years at 190 degrees Celsius. They enjoy a nearly unlimited life expectancy at room temperature. Within 10 years, the storage capacity of 3.75-inch (9.5 cm) disks encoded with this new technology is expected to reach 360 TB. With robust physical properties, long lifetime and massive storage space, 5D laser optical data storage in quartz is an ideal tool for the Arch Mission.

The Arch Mission is currently supported by tax-deductible donations. The Foundation hopes to receive funding from the government and other institutions in the future and ultimately establish a growing endowment to sustain its activities perpetually.

Re: Backing Up Humanity: First Arch Launched on Falcon Heavy
#1

I am actually quite surprised.

I had no clue anyone was working on a technology like this.

My church has already gone through this with our scriptures, but metals were used, packed into insulated cases. I don't know where the storage locations are, but someone does.

This also sounds like an expensive technology. I wonder how long it will take, and how much it will cost, to produce just one copy of "everything."