It has been estimated that by 2045 robots will be able to perform every job that humans can. But does this mean humans should worry about being replaced by machines? Many experts believe the future actually lies in a more advanced and seamless collaboration between humans and robots.

Where most robots, particularly industrial and manufacturing settings, have historically been too dangerous for humans to work closely with, advances in technology have made it possible to develop robots that are safer, more cost-effective and flexible enough to work side by side with people.

These collaborative robots are already being used in a variety of industries with rapid growth. IHS Technology reports that the industrial machinery market—including robots used in manufacturing—doubled in 2014, and is anticipated to reach $2 trillion worldwide by 2018. In addition, the International Federation of Robotics estimates that 225,000 industrial robots were sold worldwide in 2014, up 27% from 2013, led by the automotive and electronics industries. 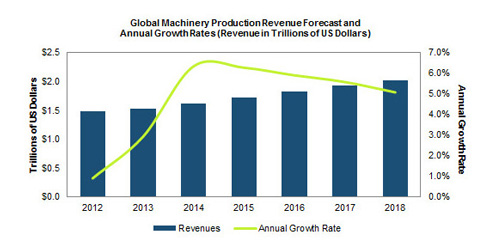 Data source : IHS Technology, April 2014. Automation is part of the latest industrial revolution—dubbed the era of smart manufacturing or “Industry 4.0"—and human-robot collaboration is a key factor in its rise. As the technologies behind collaborative robots and artificial intelligence (AI) become more sophisticated and affordable, smaller companies find that they too can invest in automation through robotics.

The growing use of collaborative robots is fueled by easier operator use. Innovations in design and controls mean that operating these robots does not require extensive technical knowledge. In fact, some of the latest robot designs are intuitive and adaptable, with features that enhance the robot's ability to "think" and heighten human safety, allowing them to work seamlessly with their human counterparts.

For example, Universal Robots' collaborative robotic arms have simple programming, Tang says. "You just have to move the arm and record points for the trajectory. Then you use the touch-screen tablet (12") to set different options." He says the software has a graphical interface that makes it easy to use.

Another user-friendly robot is Rethink Robotics' Baxter. One of the most affordable collaborative robots on the market with a base price of $25,000, Baxter is equipped with sensors and actuators that allow it to react and compensate to subtle changes in the environment. The robot itself is the interface, and features a simple graphical user interface (GUI) that allows users to train rather than program, and to modify the automation tasks performed by the robot.

Clearpath Robotics' PR2 is an application for designing collaborative robots for a variety of uses. The PR2 platform includes both hardware and software, with more than 1,000 software libraries that enable users to customize the robot's functionality and experiment with applications directly on the robot.

The MIT Computer Science and Artificial Intelligence Laboratory has used a PR2 robot called Robotina—Rosie, for short—since 2011 as part of an ongoing project supported by the U.S. National Robotics Initiative to develop robots that can work more effectively alongside humans. One of the most valuable qualities of PR2 robots may be their mobility and dexterity, with pincer-like hands that can perform complex or delicate tasks such as folding towels or picking up an aluminum can without crushing it. Robotina is being trained to work in concert with humans, learning to anticipate and react to human movement in addition to using multiple sensors to prevent collisions and accidents.

Global automation company Festo has also developed a number of collaborative robots. Festo's Robotino mobile learning robot is currently used by several universities and vocational schools. The latest version, the Robotino XT, includes a compact version of the company's bionic handling assistant, a flexible robotic arm developed for use in industrial settings. Another of Festo's designs—the LearningGripper—resembles an abstract human hand with four “fingers" that can be trained to perform tasks such as gripping and rotating an object.

While collaborative robots hold great potential for breakthroughs and innovations in nearly every industry, there are issues which must be addressed. Safety is a primary concern when working with robots—not necessarily due to the fear of AI running amok, but because robots are machines and they can malfunction, potentially resulting in injury or death to nearby humans. Nevertheless, AI has the potential to reach the point where collaboration between humans and robots is truly seamless and safe. 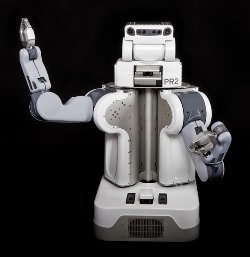 “AI encompasses natural language understanding, as well as many other basic competencies that will make interactions between robots and humans more fluid," Messina says Robots should be able to understand human gestures as well as spoken commands. AI should also provide richer semantic understanding of their surroundings, including being able to generalize and reason.

For robotics developers, safety features come first. Collaborative robots typically include a multitude of sensors to prevent collisions as well as additional safety precautions. Baxter, for example, features a smooth polymer “pinch-proof" exterior, along with back-drivable motors and force-detecting sensors.

Trust is also an issue for collaborative work. Some may struggle with so-called “smart" robots due to a lack of understanding of the processes they operate through. An MIT project seeks to address this concern with a virtual reality study that visually displays the “thoughts" of a robot using a combination of light projectors, motion-capture technology and animation software. Allowing people to “read the minds" of the robots they work with may facilitate a greater understanding of process, and put humans at ease around robot counterparts.

Collaborative robots also hold potential for human health, not only in transforming the efficiency and accuracy of healthcare, but also in providing solutions to some of the most critical health issues. Jeff Burnstein, president of the Association for Advancing Automation, cites robotic exoskeletons as an example of collaborative robots. Robotic exoskeletons are wearable bionic suits that “enable individuals with any amount of lower extremity weakness to stand up and walk over ground with a natural, full weight bearing, reciprocal walk,” Burnstein says. “This technology provides a means for people with as much as complete paralysis, and minimal forearm strength, to stand and walk."

Additionally, Gill Pratt, program manager for the Defense Advanced Research Project Agency (DARPA), says that the emerging fleets of self-driving vehicles make use of human-machine collaboration. “These cars aren't yet capable of safely operating at all speeds and in all conditions, so there's a role for both car and driver as co-pilots," he says. Humans have to work together with the onboard computer that is actively driving in the situation, particularly in controlling the speed demand. However, Pratt says that in the future “there will cease to be a collaboration with humans" as the human driver becomes more of a passenger as self-driving technology improves.

"The notion that humans can now work safely, side by side with a robot employee is both intriguing and groundbreaking," Burnstein says. "Collaborative robots have an innate ability to both fascinate and empower humans."

Indeed, whether for work or other uses such as healthcare, engineers and researchers are at the forefront of making this future possible.