What Is the Real Cost of an Industrial Robot Arm?

Robot use has risen exponentially since the 1960s, when they were primarily used for painting, welding and assembly applications in the automotive industry. Advancements in artificial intelligence, electronics, computing technology and components, such as end-effectors and sensors, have brought robots to new industries and applications. Robots are now a growing presence in countless applications, ranging from the aerospace, electrical and agriculture industries, to warehouse, food and beverage, and material technologies.

These advancements have also contributed to robots becoming safer to use, easier to program and decreasing in cost, which has led to an increase in demand. The world’s industrial robot population is now estimated to exceed 2 million. A relatively new trend in robotics is the development of collaborative robots, or co-bots. Co-bots, which are designed to work safely with humans, are becoming more commonplace in industrial manufacturing applications. The top four major industrial robot manufacturers, (ABB, Bosch, Fanuc and Kuka) are following start-up companies such as Rethink Robots and Universal Robots in development of co-bots. Collaborative robots use safety-rated sensors, allowing an operator to work in the same space as the robot and share tasks without fear of injury. As prices for these safety-rated sensors drop, the trend is reflected in the cost of co-bots.

How Much Do Industrial Robot Arms Cost? 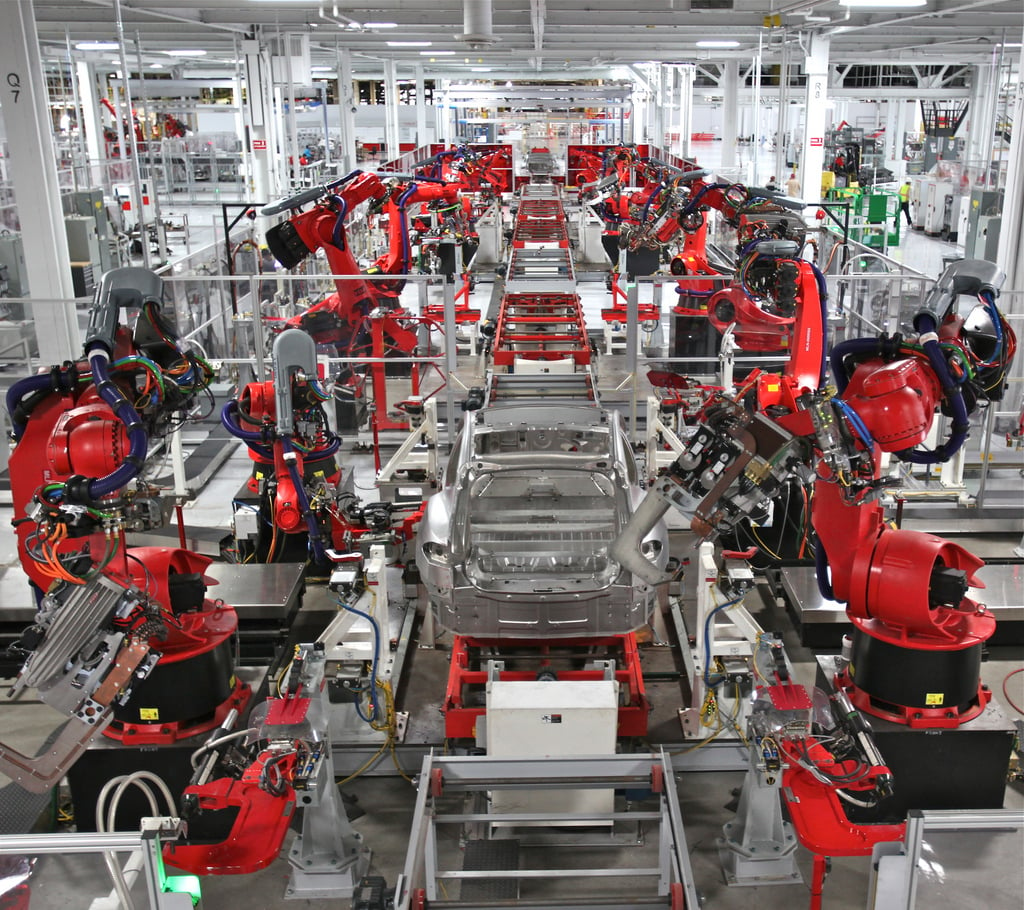 Industrial Robots in a Tesla FactoryThe price of industrial robots has dropped more than 25 percent since 2014, and is expected to drop an additional 22 percent by 2025. Today, an industrial robotic arm can cost anywhere from $25,000 to $400,000. When looking at the cost of an industrial robot system, other peripherals like controllers, a teach pendant, end of arm tooling (EOAT) and software must be considered as well. Once these application-specific peripherals are added, total system costs could double. In some cases, purchasing a used or refurbished robot or system can reduce the price as much as 50 percent. Robots for schools, universities and other non-industrial applications can be found for $1,000 or less, but these robot arms are not suited for industrial applications.

The largest factors involved in determining cost are robot size (reach), number of axes, application, end of arm tooling (EOAT) and safety components. In general, the bigger the reach and the larger the payload, the more the robot will cost. However, application-specific peripherals and safety components, such as collision sensors and safety cages, also contribute to the price of an industrial robot system.

While collaborative robots do not have the same speed or power of traditional industrial robots, they do come at a relatively low cost. For example, Rethink Robots' popular Baxter robot has a base price of $22,000. The addition of a pedestal for $3,000, a gripper for $1,750 and a two-year software service contract for $7,000 increases the price to $36,750. This translates to approximately $4 per hour, based on 40 working hours per week over a three year life span.

However, the true cost of operating a robot must factor in more than just the initial cash outlay; labor cost savings must be considered. According to a 2015 report by The Boston Consulting Group, the average global labor-cost savings could reach 16 percent by 2025, or 22 percent savings in the United States alone. Even countries with lower wages, such as China, could see a savings of 18 percent. China is currently the world’s largest industrial robot market, with over 25 percent of the total supply – and this number is growing. Asia and Australia (especially China, South Korea and Japan) currently account for approximately two-thirds of worldwide robot sales, followed by Europe and the Americas.

Robots have other cost cutting benefits, such as reduction in defects, as well as continuous operation with minimal human intervention. Robots do not require healthcare, insurance, income or time off, and they require minimal heat and light to continue their work. Operating costs are estimated at only $4 per for a robot performing assembly tasks in computer electronics manufacturing, compared to $24 for a human laborer. Robotworx has created a robot savings calculator to calculate return on investment. While the initial sticker price may seem steep, factoring in the defects and labor-cost savings, reduced downtime and decrease in waste, adding industrial robots can quickly yield a return on that initial investment.

By posting a comment you confirm that you have read and accept our Posting Rules and Terms of Use.
Re: What Is the Real Cost of an Industrial Robot Arm?
#1

What is the actual cost to build a robotic arm?

Re: What Is the Real Cost of an Industrial Robot Arm?
#2
In reply to #1
Furikuri Yugi

Re: What Is the Real Cost of an Industrial Robot Arm?
#3

Did the ~$4/hr figure include human overhead?

I would assume that those costs are already there, and not part of the calculation. Robots won't totally replace humans, so a company still has some built-in overhead costs no matter what.

Re: What Is the Real Cost of an Industrial Robot Arm?
#5

The other cost is the human cost. When the robots are in such use, humans will be unemployed. Therefore, no work, no money, not able to purchase anything. Why use robots then.? There are no people able to purchase the product, no use building anything. Not today, nor tomorrow, but down the track when will this occur.?

Re: What Is the Real Cost of an Industrial Robot Arm?
#6
In reply to #5
dnielsen

This argument has been thrown about at every technological turning point in human history. Industrial robots have been around for decades and seem to create more jobs with better wages than they eliminate. These bots all need design, integration, programming, maintenance, repair, troubleshooting, and operators to function. They do not operate flawlessly from the day they are turned on to the end of life, nor do they operate independently.

What they do do well is repeatable performance, increase quality with consistency, and operate without breaks, sick days, vacations, etc. They also excel at the repetitive, mundane, and precision operations that humans often cannot or will not do.

Agreed. Technology has been replacing tasks formerly done by humans for decades, but this doesn't mean the humans aren't needed anymore. The number of manufacturing jobs in the automotive industry has grown every year since 2009, despite the high use of robots. One other trend is the use of collaborative robots, where humans interact with robots to make a task easier, not to replace the laborer.