Humans are increasingly working alongside robots on factory floors, completing operations collaboratively by utilizing the strengths of both worker and robot. Collaborative robots (cobots) assist humans with a variety of tasks, working in the same shared spaces.

Cobots are used in a wide range of applications including painting, polishing, machine tending, quality inspections, materials testing, food handling, pick and place, assembly and packaging and palletizing operations. As more organizations recognize the potential for productivity gains in their specific factory operations, adoption of collaborative robot technology will increase. ABI Research predicts the collaborative robotics market will expand from $95 million and about 3,000 cobots shipped in 2015, to over $1 billion and 40,000 cobots delivered annually by 2020.

The market potential for robot-assisted assembly is broad. In the automotive industry, 60 percent of final assembly tasks are done manually. Robots can be used for repetitive, boring or unsafe tasks to reduce fatigue and injury, leaving humans to perform operations that require their superior cognitive abilities, skill and judgment. In this way, automation can help improve process quality, consistency and throughput. Once implemented, a cobot’s return on investment can be as short as a few months, helping companies grow their bottom line and gain a leg up on competitors. 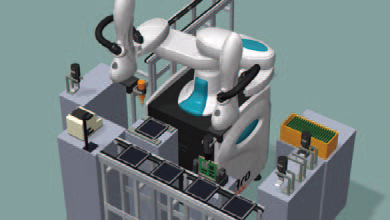 An example of collaborative robotics augmenting and enhancing a manual assembly process was presented at the New York Automation and Robotics Conference 2017 in Troy, New York, by Ron Brown from EWI.

Brown discussed a process for assembling a tablet computer, one portion of which involved manually fastening 32 hard-to-handle small screws. The process was analyzed and reconfigured to include the addition of a duAro dual-arm SCARA robot from Kawasaki to handle the screw fastening step.

The cobot was located in the center of a cluster cell with screw feeders aligned behind the robot and the assembly area arrayed in front. A human worker assembled the tablet computer’s parts and placed the assembly in a fixture for the cobot to perform the screwing operations. The cobot analyzed the assembly using a 2D vision system to locate screw holes and determine the appropriate screw type to fit in each hole. The cobot then maneuvered its end effector to the screw feeders, picked up the correct screw type using a magnetic bit and swung back to the assembly to screw the fastener into the correct hole.

Adding a cobot to the assembly operation increased the productivity of the process by 110 percent and eliminated rework. There was enthusiastic acceptance by the human workforce due to the cobot eliminating human involvement in the tedious and difficult screw fastening portion of assembly. It took six months from design to delivery to integrate the cobot into the assembly process. 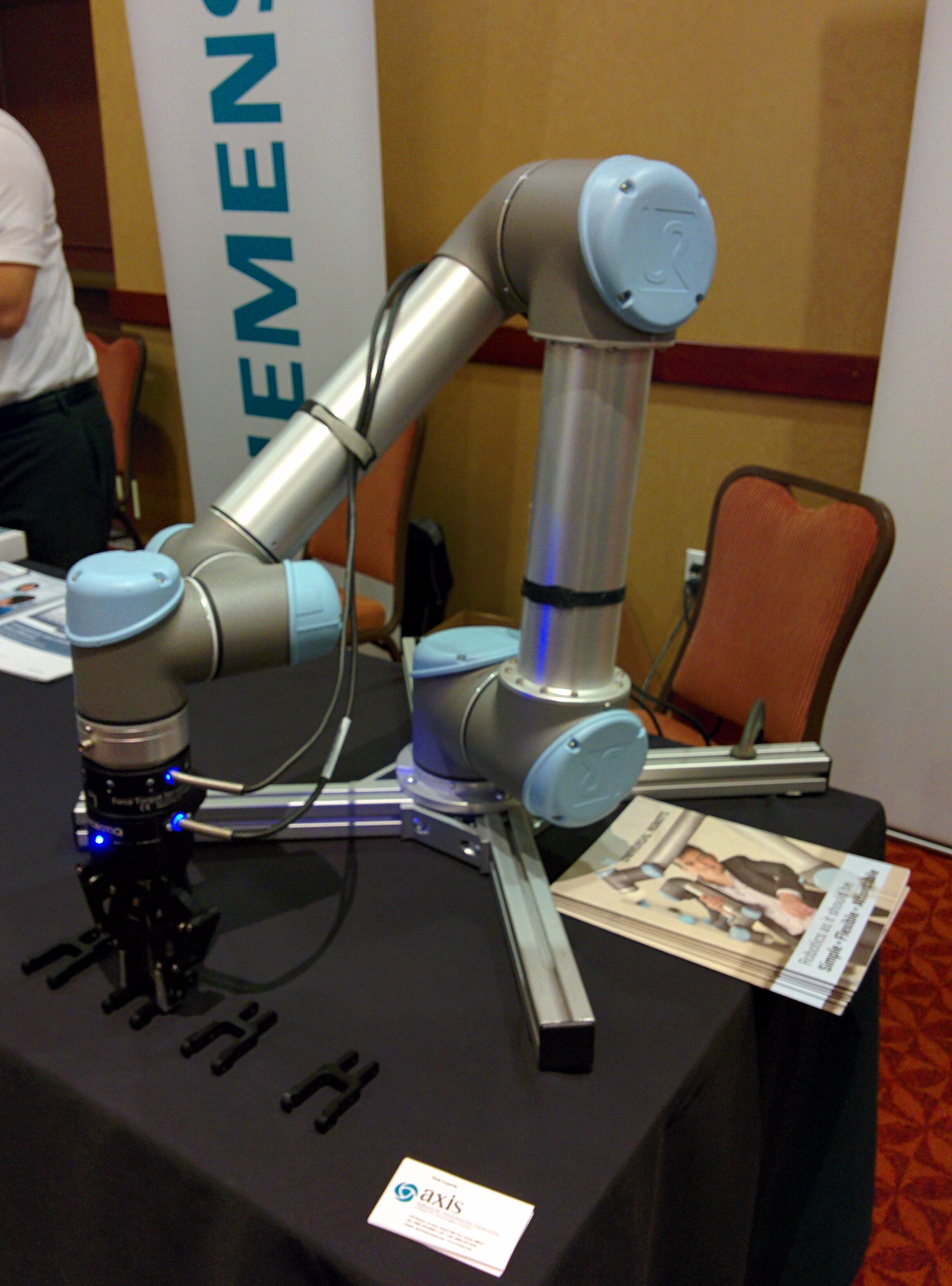 A Universal Robots cobot arm on display at the New York Automation and Robotics Conference 2017.

Introducing a robot working in close proximity to a human raises the need for various safety precautions to ensure injury does not occur. ANSI/RIA 15.06, ISO 10218 and ISO/TS 15066 lays out safety requirements for industrial cobot systems. These standards and technical specifications describe four types of collaborative operation: hand guiding, safety-rated monitored stop, speed and separation monitoring and power and force limiting.

Hand guiding refers to a human moving the robot in collaborative operations. Safety-rated monitored stop, meanwhile, refers to situations in which the robot ceases all motion if a human enters the robot’s work zone. Speed and separation monitoring is similar to safety-rated monitored stop except there are progressively slower levels of robot motion as the human moves into the robot’s work zone. Power and force limiting refers to situations in which the robot will stop moving when it comes into contact with humans. Force and torque sensors in the robot’s joints provide the capability to detect impact and signal the robot to immediately stop motion to prevent injury.

Safety is often the highest priority on factory floors, but it is not the only consideration when deciding which technology to deploy. Productivity is also an important factor. Manufacturers from diverse industries are beginning to recognize the value cobots can add to their operations. Ensuring that humans can work safely in close proximity to robots without fear of injury opens the door to widespread implementation of collaborative robot technology, driving productivity gains in a wide range of manufacturing operations.

By posting a comment you confirm that you have read and accept our Posting Rules and Terms of Use.
Advertisement
RELATED ARTICLES
Robotics firm introduces its new robotic welding system
Cobots improve efficiency and reduce floorspace for electronics provider
Cobot designed for machine-tending applications
Designing cable management systems for collaborative robots
Visumatic: From zero to fully automated screw fastening
Advertisement