Although industrial robots have been around since the 1970s, the machines were mainly stationary and used primarily for painting and welding in the automotive sector.

Now, however, a 2014 forecast from the Robotic Industries Association (RIA) indicates the industry is starting to show significant growth in the area of assembly applications. Robots are increasingly found in electronics, semiconductors, plastics, rubber and the life sciences. The RIA reports that a record 14,135 robots were ordered from North American robotics companies during the first half of 2014, a 30% increase from the same period in 2013.

One common application for vision-guided robots (VGRs) is pick-and-place in which the robot retrieves objects from one location, usually a conveyor, and moves them to another for further processing or packing. Vision can enable a robot to identify and locate the object to be handled. In addition, the images that guide the robot also can be used for real-time inspection.

Another closely related application that also presents more complex challenges is bin picking. In this case, objects must be selected from a randomly loaded bin. The development of 3D vision that adds z-axis depth information to the x-y data has enabled this process to be automated. 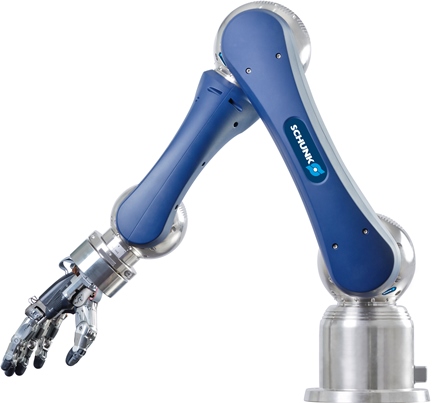 With electronics integrated into the wrist, the fingers can mimic nearly all human hand motions. Source: Schunk Inc.
3D imaging can guide a robot based on size, geometry, contrast and color as well as location. Steven Prehn, senior vision product manager for FANUC Robotics America, defines 3D VGRs as being self-aware, meaning that they can register the location of parts with respect to the bin wall while being aware of their own position, kinematics and gripper orientation.

Adept Technology has developed imaging in which an object’s depth is determined by the time of flight (ToF) for a light signal to travel from the robot's camera to the object. According to Chief Technical Officer Deron Jackson, Ph.D., a focus on the depth image of a product eliminates lighting and background coloration as concerns.

Mass marketing around consumer 3D game systems that use structured-light sensors, such as Microsoft Kinect, is driving down component costs for industrial VGRs, helping to put them within reach of a wider customer base.

Another means for reducing costs is the growing use of field-programmable gate arrays (FPGAs) for image processing. According to Carlton Heard, product marketing engineer at National Instruments, FPGAs are well-suited for certain image processing algorithms since they can run multiple tasks in parallel with little jitter or latency. An example is robotic visual servo-control for precise guidance.

Hand-like end effectors are an important application for replicating human motion. Especially useful for working alongside humans, they share the ability of the human hand to manipulate a wide variety of parts that have different sizes, shapes and materials.

Robotiq, a spinoff of the Laval University Robotics Laboratory that specializes in articulated robot hands, produces servo-driven two- and three-finger grippers. Similar to human hands, they can exert variable force and speed of grasping. 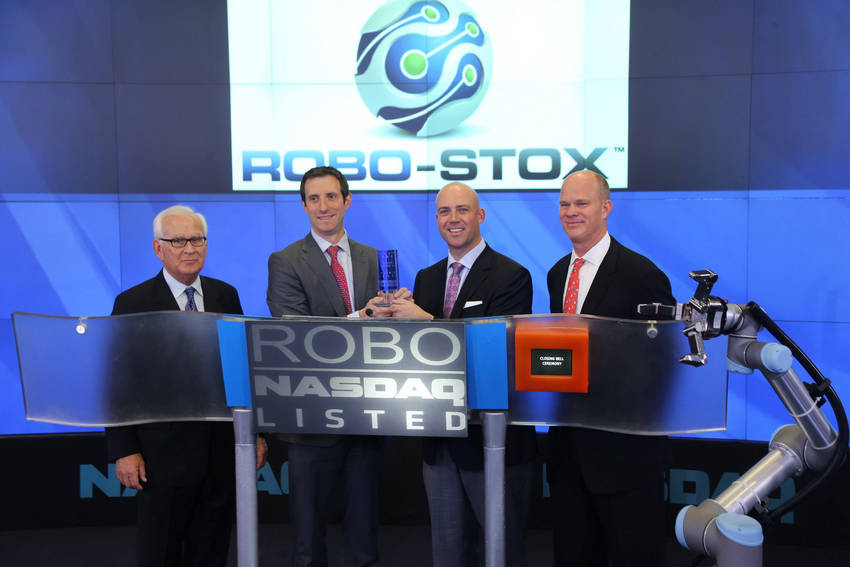 Research into mapping the motion of a human arm onto that of a robot is reported in an article in the Proceedings of the 2014 International Symposium on Advances in Robot Kinematics, “Human Mapping to a Robot Arm with Redundancy Resolution.” The article describes a platform for transferring the motion of a human arm to that of a robot. Researchers programmed a 7-degrees-of-freedom Kuka Robotics arm by using outputs from an array of sensors strapped to a human arm as set points for position, speed and acceleration.

The advances in vision-guided robots and human motion replication are being applied in the field of collaborative robots (cobots), which are designed to work cooperatively with humans. The benefits of cobots are that they can enhance the powers of their human coworkers and can be easily programmed for a variety of tasks. At the relatively inexpensive end of the cobot market are robots such as Universal Robots’ UR series and Rethink Robotics’ Baxter, both of which are designed for aiding human coworkers with lightweight but highly repetitive tasks. Keys to their designs are safety and teachability without requiring a knowledge of programming.

Michael Gerstenberger, senior engineer for Kuka Robotics, says that its robot arm has sufficient freedom of movement (what he calls "kinematic redundancy") so that it can swing out of the way even while holding a tool. This is important for safety when the robot operates in a crowded space.
Safety is critical for the usability of cobots, a fact recognized in the updated ANSI/RIA R15.06-2012 safety standard, which has been harmonized with ISO 10218:2011, and will take full effect on Jan. 1, 2015. One component of the standard is its effort to reduce the restricted area around a cobot if any of four safety measures is in place: a safety rated monitored stop, hand guiding, speed and separation monitoring or power and force limiting.

Manufacturers have chosen different approaches to meet these requirements. For example, Yaskawa Motoman senses where people are and controls the robot so it cannot hit them. Rethink Robotics' Baxter includes springs in its joints to judge the force applied to them and will stop if it is resisted.
Several research studies report on efforts to further advance human-robot interaction. In one, the Collaborative Human-Focused Robotics for Manufacturing (CHARM) research group is studying gestures as a means of human-robot interaction.

In a second report, the effects of mutual gaze on a hand-off exchange between a human and a robot are reported in the Proceedings of the 2014 ACM/IEEE International Conference on Human-Robot Interaction. The research reported on a series of observed human-human hand offs as a baseline measure for those between human and robot. The results indicated that it took around 25% less time to complete a task when the robot began the hand off by turning its head as if gazing at the human and then directing its gaze to the location where the hand off was to occur.

A new generation of robots is coming of age. Guided by vision and the replication of human motions, they are beginning to be integrated into the workforce as coequals with humans. No longer are they confined to a limited task in a gated space, they are versatile enough to adapt to a wide variety of functions. This makes them a worthwhile investment, since as one project comes to a close they can easily be moved to a new one.

These benefits are increasingly within reach of small- to mid-sized companies because of low-priced robots such as Rethink Robotics’ Baxter and Universal Robots’ UR series. Corporate planners are beginning to view robots as part of the labor force rather than merely as specialized machines. In fact, robots are seen as one factor motivating the return of manufacturing to the United States.