Part 1 of this series examined the benefits of manufacturing in space and covered several projects aimed at providing in-space 3D-printing capability. Next, we’ll look at an attempt to exploit the microgravity environment of space to fabricate a material that is of higher quality than is possible on Earth. Then we’ll investigate systems in development that combine additive manufacturing with robotic assembly to create large scale structures in space. 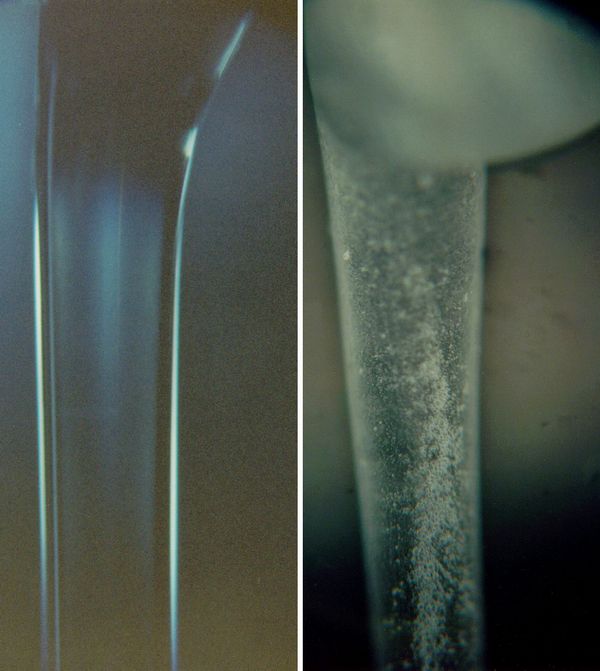 ZBLAN formed in normal gravity contains many defects (right), while the material grown in zero gravity is free from imperfections (left). Source: NASA

The microgravity environment of Earth orbit offers unique conditions – namely, the lack of gravity – for the fabrication of special materials. One such material whose properties benefit when the substance is formed in microgravity is ZBLAN. This heavy metal fluoride glass can make optical fibers with superior infrared transmittance compared to those made from other materials such as silica.

Producing ZBLAN on Earth subjects the material to the effects of gravity, which causes crystals to form as the substance solidifies. These imperfections result in degraded performance of the optical fiber. The microgravity environment of Earth orbit, however, allows the material to form without defects, generating a flawless product with properties that are better than those of ZBLAN created on Earth.

To confirm the superiority of ZBLAN optical fibers fabricated in space, private company Made in Space will soon conduct the Optical Fiber Production in Microgravity experiment on the International Space Station (ISS). The test will draw out at least 328 feet (100 meters) of ZBLAN optical fiber aboard the space station, after which the material will be returned to Earth for testing.

ZBLAN has many potential applications if the fiber manufactured aboard the ISS is verified to have improved quality compared to terrestrial ZBLAN. A new market for the space-made fiber may open, supporting the future establishment of space-based production facilities. This would be the first instance of monetization of products created in space and would represent the birth of a nascent commercial space manufacturing industry.

“We are attempting to change the way we build space systems,” said Steve Jurcyk, associate administrator for NASA’s Space Technology Mission Directorate, during a press briefing at Made in Space’s office in the NASA Ames Research Park. “Now, we build things on the ground and launch them using fairly expensive and complicated rockets. We are seeking to create an infrastructure to build systems in space rather than launching them.” 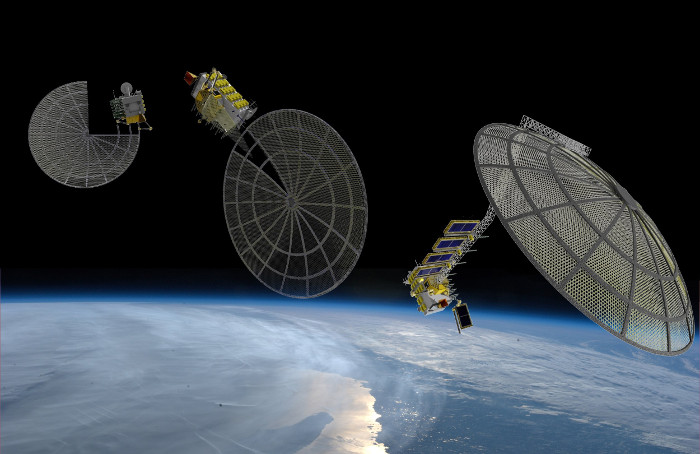 Artist’s concept of Archinaut constructing a large reflector in space by 3D printing structural components and assembling them robotically. Source: NASA/Made in Space

The first of the IRMA projects is known as Archinaut. This additive manufacturing system combined with assembly robotics is designed to manufacture and assemble various parts for a satellite including trusses, booms, reflectors and antennae.

Archinaut is packaged as an integral part of a satellite and includes raw material to be used in the additive manufacturing process as well as some prefabricated components. With its robotic assembly capability, Archinaut can build satellites with a high level of complexity, integrating parts such as cable harnesses, solar panels, antennae and sensors with structural components being manufactured on orbit. The system also has the ability to alter the configuration of a satellite, incorporating upgrades or changing the physical layout of structures on the platform.

The third IRMA project is Dragonfly, a system that enables satellite self-assembly in orbit and features a 3.5 meter robotic arm with the dexterity to manipulate controls, handle objects and clamp down. Helmed by Space Systems Loral, Tethers Unlimited is contributing expertise on truss manufacturing, and MDA U.S. Systems is developing the robotic arm. 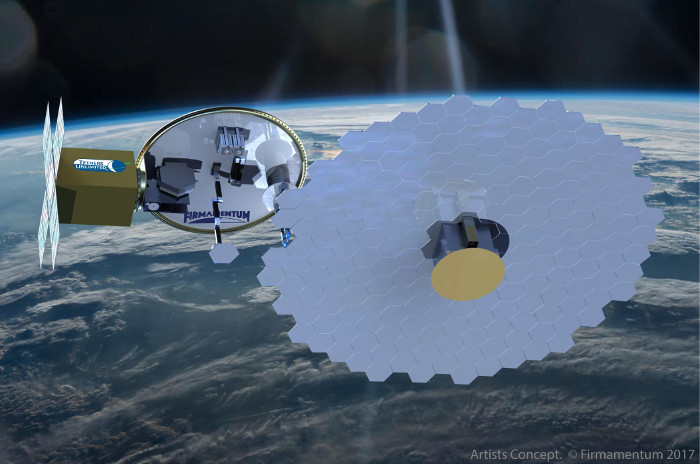 Artist’s concept of OrbWeaver, an in-space manufacturing device which will 3D print antenna reflectors and robotically assemble them with an RF system to create a small SATCOM satellite. Source: TUI/Firmamentum

OrbWeaver converts an aluminum Secondary Payload Adapter ring – a structural element of the Evolved Expendable Launch Vehicle that OrbWeaver rides into space – into a large antenna reflector. The system then robotically assembles the antenna and an array of radios to make a communications satellite that sends 12 gigabits of data per second to mobile K-band very small aperture receivers on the ground.

In-space manufacturing is seen as an important technology capability that will enable improved satellite designs, success in exploration missions and technological superiority over rivals. Manufacturing and assembly in space is also a crucial component of a future space industry that makes possible large-scale space structures, spaceships and extraterrestrial habitats. With the successful technology demonstrations being carried out today, that future is within sight.