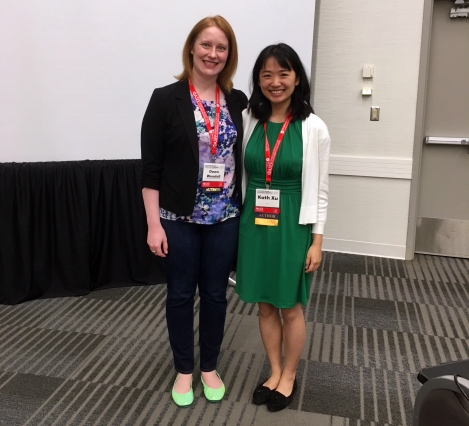 Dawn Wendell and Kath Xu presented their findings on closing the gender gap in engineering at the 2017 ASEE Annual Conference. Image credit: Kath Xu.The existence of a gender gap in science, technology, engineering and math (STEM) fields is no doubt a familiar story. According to the American Society for Engineering Education (ASEE), for instance, only 13.2 percent of bachelor’s degrees in mechanical engineering were earned by women in 2015.

Yet at MIT, as of fall 2016 women make up 49.5 percent of undergraduates in the mechanical engineering department.

What accounts for such a startling difference? A team of MIT researchers set out to answer that very question, and found several intriguing answers.

First: Gender parity is being used as a recruitment tool. The admissions office at MIT has worked actively to combat the popular assumption that the student population is predominantly male (in fact, undergraduate population overall is 46.1 percent female). Tools like student blogs on the admissions office website are utilized to showcase women and minorities at the school. There’s also the Women’s Technology Program, which invites rising high school seniors to live on campus over the summer and gain hands-on experience in labs and classes.

Second: There is an acknowledgment of the role female faculty play in terms of offering guidance and mentorship to female students. Not so much as role models, say the researchers, but as “existence proof” – the assurance that there are job prospects for female engineers. As for building the female ranks of the faculty itself, active departmental measures were taken in the early 2000s to encourage women to apply for positions -- including cold calling and a broadening of job descriptions.

Finally: An awareness of the gender gap at the institutional level has led to a concerted effort to close it. Over the past two decades, MIT has introduced more women’s programming across departments; invited speakers to address topics like impostor syndrome; offered courses and programming specifically focused on issues of gender equity in STEM.

The battle hasn’t been won, however. Dawn Wendell, Ph.D., a senior lecturer in mechanical engineering who served on the research team, notes that subtle bias is everywhere. “I’m often mistaken for an administrative assistant, and when I give talks elsewhere, people will walk right past me and ask where the invited speaker is,” she says.

The researchers conclude that the cultural shift needed to achieve gender parity in the mechanical engineering department was sparked by many small changes and the support of key allies on campus. Their hope is that the example offered by both the department and the institution as a whole could help other schools. “We wanted to provide a blueprint that is broadly applicable to other universities that want to increase the female population in their STEM departments,” says researcher Kath Xu, who graduated from MIT in 2016.

By posting a comment you confirm that you have read and accept our Posting Rules and Terms of Use.
Re: Gender Parity Progress at MIT
#1

Perhaps MIT should promote a transgender program targeted at the sophomore year. If we can't recruit 'em, lets build 'em.