The Atlantic Monthly recently published an eye-opening article, Historic Rejection Letters to Women Engineers. The letters, from the archives of the Society of Women Engineers, were 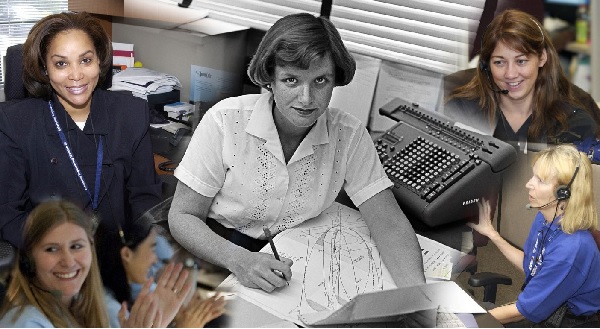 Composite picture of women engineers. Credit: NASA/JPL-Caltechmailed in 1919 in response to a survey conducted by two plucky women from Colorado.

Lou Alta Melton and Hilda Counts wanted to start an organization that supported and championed the entry of women into engineering schools. Part of their planning included corresponding with colleges of engineering across the United States. The published excerpts range from "no women now, or ever," to a positive response from the University of Michigan and Stanford. One school, Carnegie Institute of Technology (now Carnegie Mellon), was in the middle: women could study applied science but only as members of Margaret Morrison College, the women’s college.

So women in the U.S. did not partake of formal engineering education until the mid-20th century. The advent of the Equal Employment Opportunity legislation and affirmative action plans during Lyndon Johnson’s administration effectively required employers to hire members of protected classes, including women. Given the paucity of female engineers, finding new employees who ticked the EEO box was not easy.

Even though the number of women graduating from engineering schools has increased in the ensuing 50 years, they still constitute less than 20 per cent of the engineering workforce—13 per cent according to a Harvard Business Review article—despite producing 20 per cent of engineering graduates. Why is the needle stuck so low?

The HBR article examined how women become acculturated into the profession, starting in college. Many women reported that the males on their project teams frequently relegated them to non-engineering roles. This discriminatory treatment continues in internships and summer jobs, where women's experiences ranged from gender stereotyping to sexual harassment. With so few women working as engineers, those in the profession have difficulty building a supportive network of friends and mentors.

Exposure to an engineering culture that feels like an all-male domain discourages many women from pursuing engineering. They get their first taste of sexism in school; some drop out of the profession before graduation, others work briefly and then change directions. Writing in the Huffington Post in 2014, Rebecca Adams quoted a respondent to a University of Wisconsin-Milwaukee survey. Her comment sums up problems with the culture: “There isn’t a strong network of females in engineering." "You either need to learn to be ‘one of the guys’ or blaze the trail yourself, which is very difficult,” said another respondent, who left engineering to become an executive officer in the construction field.

Multiple studies confirm the effect of the men’s club atmosphere on women’s interest in becoming, and remaining, engineers. Why stick around where you’re not wanted?

In addition to blatant examples of workplace sexism, some discrimination is less obvious. A recent Engineering360 article suggests that women who start their careers in technical positions receive promotions to management slots in numbers disproportionate to their absolute numbers in the profession. Steering women out of the technical job track increases the potential that they will leave the field altogether.

Another study identified additional expressions of bias, including anti-female bias among engineering managers—both male and female. The study authors labeled another bias “prove-it-again.” Women must repeatedly prove themselves to gain respect from their male peers. “Tightrope bias” refers to the narrow range of acceptable workplace behaviors. Women cannot act feminine, or masculine, or show emotion, or act difficult.

Female engineers who are also parents experience “the maternal wall.” A female computer engineer who worked at a national laboratory—where one might expect less discrimination—told me one of her managers told her that she could be a mother or an engineer but not both. This was after she had had two children; she had two more and earned her master’s degree working at this laboratory. Her experience was typical at the time and evidently has not changed much in the ensuing 25 years.

Another form of subtle discrimination occurs when women are assigned less-interesting parts of a project. This starts in college. Authors of the study cited in the HBR give a telling example: “There was this one case where, in our design class, two girls in a group had been working on the robot we were building in that class for hours, and the guys in their group came in and within minutes had sentenced them to doing menial tasks while the guys went and had all the fun in the machine shop.”

If men are having all the fun, how fulfilling would a woman’s career be?

When will it change?

Several authors point out that keeping the focus on recruiting women into STEM careers is only half the battle. The other half is actively working to change engineering culture. To borrow a phrase from the 1960s, the profession needs some concerted consciousness-raising. The computer engineer mentioned above has two daughters, both of whom followed their mother (and father) into engineering. If employers want these young women and their counterparts to persist in the field, they will need to engineer a supportive, inclusive atmosphere in the workplace.

By posting a comment you confirm that you have read and accept our Posting Rules and Terms of Use.
Re: Women Still Aren't Going into Engineering
#1

Fully staffed, I (male) had women engineers working for me. Their main problem in my office, including occasionally from me, were socialization comments from both sides, but mainly from the men, that included varying degrees of fundamental boy-girl stuff and most of which was purely innocent conversation, but, more often than it should have, elicited a response from the other (opposite sex) party of a ''cute'' response, to which there was the ''look''. Why the same repartee between parties of same sex just slid along into immediate oblivion, but not so more often than not with the same between opposite sexes, is just the way it is, I suppose.

But there definitely is a sexism problem for women engineers engaging the larger world beyond their immediate work place, and that sexism seems also to be quite rampant as the women engineers engage other women in ''positions of stature'' in the broader commercial, institutional and governmental world. I was always surprised when one of my women engineers would come into the office after a venture into the outside world fuming about ''bitch this'' and ''bitch that'' resulting from an encounter with another woman in the course of my engineer's doing her job.

A casual observation: The women I have encountered as physicians and lawyers seem to be a more self-confident, engaging and assertive group than the women engineers, as a group, that I have encountered in the typical engineering work force. But, things, they are a'changing: The past, current and president elect of the American Society of Civil Engineers are three women engineers, a never-before event.