Researchers at Jilin University in China are looking to the natural world to solve the problem of material erosion by solid particles. Dr. Han Zhiwu and his team are turning to the deadly Androctonus australis, the yellow fat-backed scorpion, for inspiration, as reported in Design News.

In a paper published online in the journal Tribology Transactions, the team says that desert scorpions are able to resist erosion despite being bombarded with abrasive sand particles at velocities as high as 100 mph due to their body design.

The Jilin University team earlier used a multi-step process to model a scorpion's back. They found that the surface was convex and grooved and that both shapes contribute to resisting erosion. The grooves cause the air to rotate, resulting in a low-speed reverse flow zone. This causes some of the sand particles to be flung away rather than hit the surface. Sand particles that do hit the surface move at a lower velocity than they otherwise would. The result, the researchers say, is a significantly lower erosion rate. 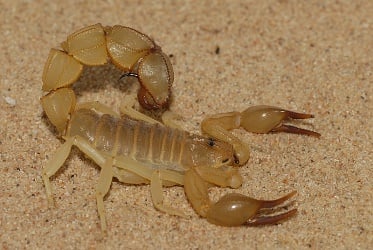 Body design protects the yellow fat-backed scorpion from erosive effects of sand. To test the model's prediction, the team produced steel coupons with grooved surfaces and blasted them with sand. The results showed that the grooves decreased the abrasion rate compared to smooth samples.

Dr. Han and his colleagues also showed how another aspect of scorpion armor could be used to make more erosion-resistant products. A scorpion's carapace consists of a series of hard, moveable plates covering a soft inner core. The researchers believe that the soft layer absorbs some of the impact energy of the sand particles and reduces the erosion rate.