Engineering researchers are putting a two-story wooden structure through a series of earthquake simulations at the University of California San Diego shake table. The goal is to gather data to help design wood buildings—sometimes known as "plyscrapers"—as tall as 20 stories that do not suffer significant damage during large earthquakes.

“We are working to minimize the amount of time buildings are out of service after large earthquakes. We are also focused on cutting the costs required to repair them,” says professor Shiling Pei, an Assistant Professor at Colorado School of Mines who is leading the tests funded by the National Science Foundation (NSF) and a variety of industry sponsors. The tests will take place on the UC San Diego shake table, one of the largest outdoor shake tables in the world.

Based on the insights gleaned from this current set of tests and related research, the team will return to San Diego in 2020 to build, shake and ultimately burn an earthquake-resilient 10 story timber building on the UC San Diego shake table.

In the current tests of the two-story, 22-foot-tall structure, the researchers are studying the behavior of full-scale seismic safety systems made from advanced wood materials—including rocking walls, which can rock during a temblor and then re-center back by itself, and innovative seismic safety designs for the structural elements in the building's floors. The wood is primarily cross-laminated timber (CLT), which is a relatively new, high-performance material made from layers of wood laminate.

In June, officials in Portland, Ore., approved plans for a 90,000-square-foot, 12-story, mixed-use project that will rank as one of the tallest timber high-rises to be built in North America. 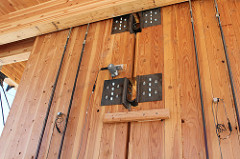 Sensors will enable researchers to gather data as the shake test progresses.The building will be constructed primarily with CLT components for the floors and the lateral force resisting system (LFRS), in conjunction with glue laminated beams (GLB) and glue laminated columns (GLC). The superstructure of what is being termed a "plyscraper" will be supported on a conventionally reinforced mat foundation.

Resiliency is one of the key tenets of this multi-year San Diego research project focused on tall wood buildings using mass timber materials.

The 22-foot structure being tested is a minimalist system aimed at collecting the information required to design tall timber buildings that have this kind of earthquake resilience.

The researchers working on the two-story building will collect data through more than 300 sensor channels in three phases of testing. Data will be generated at pre-selected points to measure how the cross-laminated timber (CLT) panels bend and how the panels move relative to each other. Researchers are particularly interested in a system that allows the building to rock in response to an earthquake and on how the walls and floors interact during shaking. 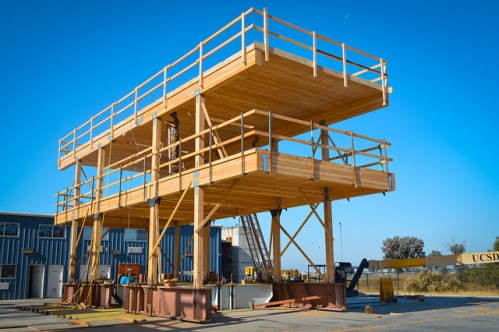 As wooden structures gain popularity, engineers work to ensure their seismic resiliency.In rocking wall systems, vertical mass timber walls are connected to the foundation by post-tensioned rods that run up through the floor and special U-shaped steel energy dissipaters. The rods allow the wall to rock during an earthquake and snap back into its original upright position, minimizing the deformation and the resulting structural damage.