A look at industry applications that benefit most from moisture measurement

Across many industrial segments— e.g. oil and gas, semiconductor manufacturing, power distribution and power generation—there is a common need that is not frequently discussed but is extremely important: Measuring and controlling the impact of moisture.

In industrial applications, moisture is a contaminant. Either in gas or in liquid form, moisture has the power to dramatically reduce product quality, damage equipment and increase operational costs. Moisture is able to penetrate virtually any surface including metals such as copper, bronze and carbon steel.

As a result, in compressed air and gas applications moisture can render test results useless, cause corrosion in piping and equipment, produce poor product quality, lead to ice formation at low temperatures, generate premature wear and equipment failure, and react with other chemicals and gases to distort industrial processes. It is obvious moisture levels must be monitored and controlled.

However, unlike other process variables (pressure, temperature, and flow), moisture is unique in that it is extremely difficult to accurately and consistently measure within industrial applications. Because moisture poses a significant threat to operations, understanding how to measure moisture is a first step in mitigating its harmful effects.

Humidity is the unit of measurement of moisture in gases. Relative humidity measures the amount of water vapor present expressed as a percentage of the amount needed for saturation at the same temperature. It is most commonly used in meteorological applications. Absolute humidity is most frequently used in industry and measures the mass of water vapor present in a unit volume of air at a given temperature and pressure. 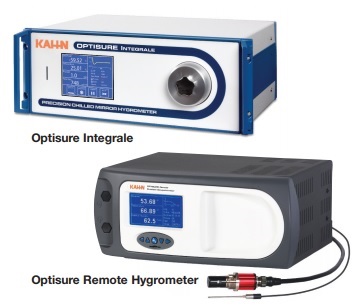 Figure 1: Optical (chilled mirror) hygrometers, like the Optisure pictured above, measure dewpoint by cooling a gas under test until dew or frost forms on a mirror. (Source: Kahn Instruments, Inc.)

Capacitive sensors respond to small changes in water vapor pressure, feature a rapid response and a broad calibrated range, and are relatively inexpensive to purchase and operate. The sensors are fairly stable, are not harmed by contact with water, and are fully interchangeable without the need for hygrometer recalibration.

In comparison, optical (chilled mirror) sensor technology offers substantially better accuracy at an increased price. These instruments cool a gas under test to the point where dew or frost forms on a metallic mirror, providing a fundamental measurement of dew or frostpoint. The formation of dew or frost is precisely monitored by an electro-optical system and the instrument automatically heats the mirror to vaporize the accumulated dew or frost, recalibrates itself for altered reflectively due to contaminants, and then resumes measuring.

Virtually every industry must manage the effect of moisture for a variety of reasons. The remainder of this article will focus on specific industry requirements and uses. 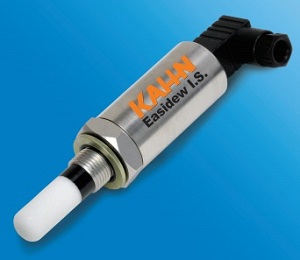 Industrial plants such as refineries, general manufacturing or paper mills use dry compressed air to power pneumatic tools and machinery, control and operate valves, conveying systems and other equipment. Either permanently installed or portable hygrometers can be used depending on the application. Permanent devices, such as the hygrometers from Kahn are installed at the outlet of the air dryer and can provide local and/or remote dewpoint readings. Portable hygrometers can be quickly used to spot check dewpoints at any location.

In electric power generation facilities, whether fueled by coal, natural gas, oil or nuclear power, measuring the compressed air dewpoint is an operational requirement for the plant’s pneumatic controls and instrumentation.

In certain power plants, another major concern is the measurement of moisture content of hydrogen used to cool an electric power generator. Because hydrogen can be explosive when mixed with air, a dewpoint sensor must be intrinsically safe or explosion proof, such as the Kahn Easidew IS Transmitter or Easidew PRO XP, which can be installed at the outlet of a gas dryer or anywhere in the compressed air system to monitor dewpoint.

Again, in this industry, portable hygrometers can be used to spot check gas moisture levels or permanent dewpoint transmitters can be installed for continuous readings. 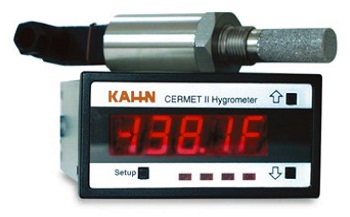 For oil and natural gas pipelines, water is used to pressure test during initial construction and following any pipeline repairs. After pressure testing, water is purged from the pipeline through hot air drying where moisture is evaporated into vapor and pushed out the pipeline by flowing air. To verify the dryness of the pipeline, two hygrometers are used. One is typically installed at the inlet of the pipe while the other is installed at the outlet. These instruments allow engineers to determine if the pipe is sufficiently dry for the flow of oil or gas.

In natural gas production and transportation, the gas sources are often dirty, corrosive, and laden with moisture. This moisture can corrode the pipes, decrease flow capacity and lead to blockage or equipment damage. Dehydrators with filters are used to both dry the gas and remove contaminants. A permanently installed moisture analyzer such as the Kahn Cermet II Hygrometer or Easidew Transmitter can be used to monitor the dehydration process in production plants and a portable (spot check) hygrometer, such as the Kahn HygroPort IS can be used to monitor pipeline dewpoint.

There are two areas where dewpoint measuring is critical to operations in semiconductor manufacturing: Cleanrooms where semiconductor wafers are produced and stored, and in ultra-high purity gases used in the manufacturing process.

To prevent contamination of materials and to eliminate static electricity caused by moisture, optical (chilled mirror) technology is used to measure dewpoint and relative humidity. Meanwhile, dewpoint measurement in ultra-high purity gases is accomplished by instruments such as Kahn’s Pura High-Purity Gas Dewpoint Transmitter to measure trace moisture (dewpoints as low as -120C or 200 parts-per-trillion).

A typical air-separation plant separates atmospheric air into such primary components as nitrogen, argon, oxygen, hydrogen, carbon dioxide and helium. Bottled separately, the gases are used in a variety of industrial processes. Permanently installed as well as spot-check hygrometers are used to measure moisture content. Kahn products appropriate for this use include the Cermet II Hygrometer, Easidew Dewpoint Transmitter, and for portable spot-check measurements, the Easidew Plus Portable or HygroPort Portable solutions.

Ozone generators are employed in purification and sanitation processes that use air as a feed gas to the generator. This gas must be dry to prevent arcing in generator electrodes and corrosion of system components. Hygrometers are used to monitor and control dewpoint of the feed gas so that it remains sufficiently dry to extend the life of the generator.

Regardless of industry, there is a common problem with the potential to disrupt operations – the negative impact of moisture. Without proven instruments to properly measure this contaminant, poor product quality or equipment failure may result. Within harsh and challenging industrial environments, Kahn hygrometers can measure and control moisture to insure your products are of the highest quality and your equipment operates efficiently.

By posting a comment you confirm that you have read and accept our Posting Rules and Terms of Use.
Re: Why Measure Moisture?
#1

It is a famous game in the world i have played solitaire game one of music is awesome i play to enjoy enjoy and relax.

Re: Why Measure Moisture?
#2

I have found very beautiful article on time about Calculating and monitoring the power of wetness. Its totally amazing article as you have put details very amazingly in it so thank you so much. Visit studyclerk.com website for getting research paper help that has proven record of students' assistance in writing.