The Use of Optical (Chilled Mirror) Sensor Technology for Moisture Measurement

Optical (chilled mirror) is the most-widely used technology for calibration of dewpoint and relative humidity sensors and transmitters. Optical (chilled mirror) hygrometers are also used in mission-critical applications where long-term stability, accuracy and precision are required. In addition to calibration and metrology laboratories, these applications include clean rooms, pharmaceuticals, fuel cell research, R&D, and furnaces.

To best understand optical (chilled mirror) technology, let’s start with the definition of dew point—the temperature (° F or ° C) at which condensation (dew or frost) occurs when a gas is cooled at constant pressure. Optical (chilled mirror) technology is a fundamental measurement method whereby the gas under test is cooled to the point where dew or frost forms on a mirror.

The technology works as follows: 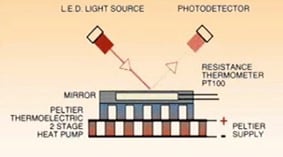 Chilled mirror sensor operation occurs when a mirror, typically gold-plated copper or platinum or stainless steel, is bonded to a Peltier thermoelectric heat pump. When current flows through the array of back-to-back P-N junctions of the heat pump, electrons flow out of the matrix, leaving energy holes filled with heat energy, resulting in the mirror cooling.

Photodetector output is used in a closed-loop servo-control to maintain the mirror at equilibrium temperature so that the condensate (dew/frost) on the mirror is constant and the temperature of the mirror equals the prevailing dew point temperature.

In order to retain their reliability and avoid skewed dew point readings, mirrors must be kept clean. Chilled mirror hygrometers offer self-cleaning and optical balancing systems to mitigate contamination. Mirrors can also be cleaned manually with distilled water or solvents if they are severely contaminated.

There are several advantages of optical (chilled mirror) sensor technology, including accuracy of ±0.1° to ±0.2° C which is 10 times greater than capacitive sensor technology, the most commonly used alternative technology in industry; the ability to measure higher dew points (to 130° C); use in higher ambient temperatures up to 130° C; and drift-free operation.

While it is often used in mission-critical applications, optical (chilled mirror) technology is not appropriate for use where there are flammable gases or within hazardous environments. It is also more sensitive to contaminants and can be up to 60% more expensive than capacitive technology. Also, multiple instruments are required to cover the entire measurement range of –100° to +130° C (–148° to +266° F). Capacitive instruments are often the technology of choice for these alternate applications.

While it is correct that optical chilled mirror hygrometers require a comparatively larger initial investment, true cost of ownership indicates a potential greater value based on their precision, long-term stability and ease of maintenance. These hygrometers have been known to maintain their original factory specifications for more than 20 years without adjustment.

For additional information on the use of optical chilled mirror technology, as well as capacitive sensor technology used to measure moisture (humidity), click here to view Kahn Instruments’ Fundamentals of Moisture Measurement in Industrial Applications webinar, or click here to download the eBook.

By posting a comment you confirm that you have read and accept our Posting Rules and Terms of Use.
Advertisement
RELATED ARTICLES
Why Measure Moisture?
Direct Insertion Hygrometer Sensor
Moisture measurement for ozone generators
Webb Telescope Passes Cryo Tests, Now "Optically Complete"
Measurement and control of compressed air systems
Advertisement