Microbeads made from cellulose can replace their plastic counterparts, preventing tons of waste plastic from entering inland waterways and the world’s oceans. The manufacturing process is scalable, and the product can 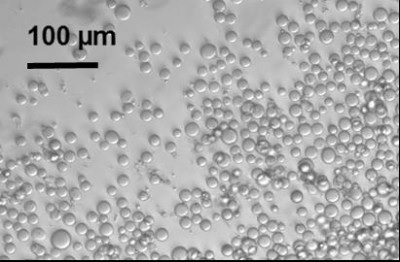 Plastic microbeads turn up in many personal care and cleaning products, from toothpaste to sunscreen, to improve the products’ texture. The spheres are so tiny—less than 0.5 mm diameter—they slip through water treatment filters and end up in rivers and eventually oceans. The beads account for eight million tons of waste plastic per year dumped in oceans. Fish and wildlife ingest them, harming the animal and ending up in the human food supply.

Manufacturers need a replacement, and quickly. At least two countries have banned the beads. The UK’s ban takes effect this year. Although less restrictive, the US ban was implemented in 2016. Australia is contemplating a ban.

Scientists at the University of Bath’s Centre for Sustainable Chemical Technologies make the beads by forcing a cellulose solution through a tubular membrane, which creates the tiny spheres, and then washing the beads away with vegetable oil. After the beads set, the oil is removed. Tweaking the cellulose solution and the membrane allows the scientists, or a manufacturer, to customize beads.

The beads perform the same function as their plastic counterparts. After the beads enter the water purification system, bacteria in sewage treatment plants decompose them.

By posting a comment you confirm that you have read and accept our Posting Rules and Terms of Use.
Re: Cellulose Microbeads Reduce Plastic Waste in Rivers and Oceans
#1

Biodegradability of consumer product materials in contact with food or beverage is a tricky adventure in technology. Such issues as exotic preservatives embedded in the material for preservation during the object's service life, but responsive to biodegradation at the onset of the intentional waste elimination process, is the first big hurdle that comes to mind. Also, all manner of stuff can be adsorbed on preservative stabilized cellulose, such stuff, in turn, becoming support for offensive organic (e. g., mold) activity.

But this is a start. Some products need to be put into the real world to advance the concept.