A Planet Hotter Than the Sun

The planet was found by astronomers at Ohio State University and Vanderbilt University. It also has more unusual features, in addition to its super-hot temperature. 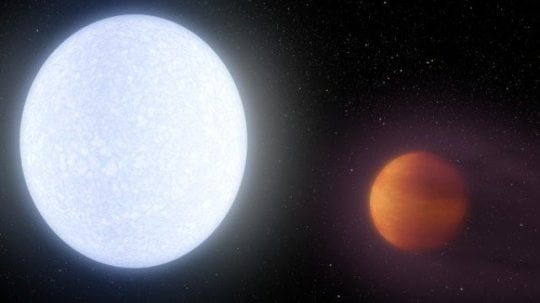 Astronomers at The Ohio State University and Vanderbilt University have discovered a planet that is so hot, its temperature rivals most stars. Credit: Robert Hurt, NASA/JPL-Caltech

For instance, it's a gas giant 2.8 times more massive than Jupiter but only half as dense, because the extreme radiation from its host star has caused its atmosphere to puff up like a balloon. It’s tidally locked to its star — as the Moon is to Earth. The day side of the planet is perpetually bombarded by stellar radiation, and as a result is so hot that molecules such as water, carbon dioxide and methane can't form there. The properties of the night side are still a mystery though.

"It's a planet by any of the typical definitions based on mass, but its atmosphere is almost certainly unlike any other planet we've ever seen just because of the temperature of its day side," said Scott Gaudi, professor of astronomy at The Ohio State University and a leader of the study.

KELT-9b orbits a star, dubbed KELT-9, which is more than twice as large and nearly twice as hot as our sun.

"KELT-9 radiates so much ultraviolet radiation that it may completely evaporate the planet,” said Keivan Stassun, a professor of physics and astronomy at Vanderbilt who directed the study with Gaudi. “Or, if gas giant planets like KELT-9b possess solid rocky cores as some theories suggest, the planet may be boiled down to a barren rock, like Mercury."

That could happen, if the star doesn't grow to engulf it first. "KELT-9 will swell to become a red giant star in about a billion years," said Stassun. "The long-term prospects for life, or real estate for that matter, on KELT-9b are not looking good."

Given that its atmosphere is constantly blasted with high levels of ultraviolet radiation, the planet may even be shedding a tail of evaporated planetary material like a comet, Gaudi added.

In 2014, astronomers using the KELT-North telescope at Winer Observatory in Arizona noticed a tiny drop in the star's brightness, that indicated that a planet may have passed in front of the star. The brightness dipped once every 1.5 days, which means the planet completes a "yearly" circuit around its star every 1.5 days.

Further observations confirmed the signal to be due to a planet, and revealed it to be what astronomers call a "hot Jupiter." It’s the ideal kind of planet for the KELT telescopes to spot. But astronomers hope to observe it with other kinds of telescopes in the near future.

The pair typically studies habitable planets in other solar systems, but they noted that there is good reason to study the extreme.

“They are easy targets and there's a lot that can be learned about potentially habitable planets orbiting very low-mass stars in general. On the other hand, because KELT-9b's host star is bigger and hotter than the sun, it complements those efforts and provides a kind of touchstone for understanding how planetary systems form around hot, massive stars," Gaudi said.