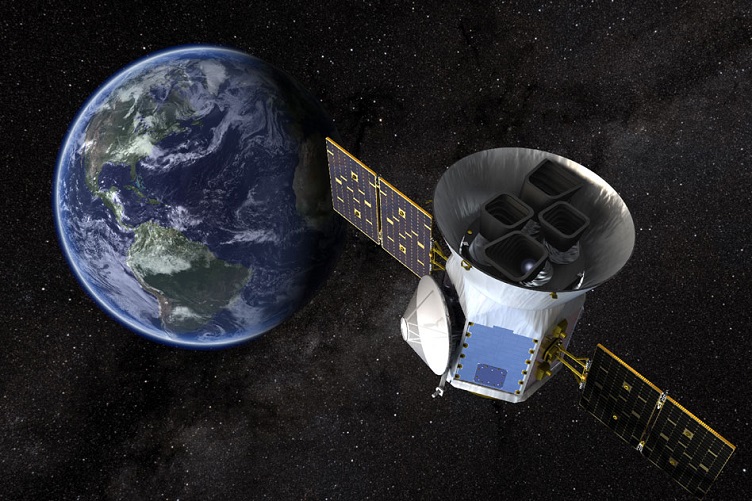 An artist's rendering of the TESS satellite in orbit around Earth. Source: NASA

The Transiting Exoplanet Survey Satellite (TESS) has discovered the first Earth-sized exoplanet, the smallest world outside the Milky Way that TESS has yet identified.

The planet, named HD 21749c, orbits a nearby star about 52 light years from Earth. The same star hosts a second planet, called HD 21749b, a warm sub-Neptune type with a longer, 36-day orbit.

The Earth-sized planet is likely a rocky, uninhabitable world, which circles its star in just 7.8 days in a tight orbit that generates planet-surface temperatures up to 800° F.

While HD 21749c is not a place anyone would visit, it demonstrates TESS’ ability to pick out small planets around nearby stars. TESS could find milder planets with conditions more suitable for hosting life.

“For stars that are very close by and very bright, we expected to find up to a couple dozen Earth-sized planets,” says Diana Dragomir, TESS member and a postdoc in MIT’s Kavli Institute for Astrophysics and Space Research. “And here we are—this would be our first one, and it’s a milestone for TESS. It sets the path for finding smaller planets around even smaller stars, and those planets may potentially be habitable.”

Since April of 2018, TESS has been hunting for planets beyond the solar system with four cameras pointed outward to monitor the nearest, brightest stars in the sky. The goal of the satellite is to identify at least 50 small, rocky planets along with estimates of their masses. So far, the mission has discovered 10 planets smaller than Neptune, including a planet twice the size of Earth; a hot, rocky world slightly bigger than Earth; and two sub-Neptune planets that orbit the same star.

The discovery of the Earth-sized planet means there are likely to be more in the same solar system and scientists are examining the same observations again to see if they could spot any other small worlds hiding in the data.

“We know these planets often come in families,” Dragomir said. “So we searched all the data again, and this small signal came up.”

Other Earth-sized exoplanets have been discovered in the past, mostly by the Kepler Space Telescope. But since that telescope is retired, it falls to TESS to discover new exoplanets in nearby systems. Kepler was mainly used to study stars that were further away than those monitored by TESS so it’s charter is to study those closer to Earth.

By posting a comment you confirm that you have read and accept our Posting Rules and Terms of Use.
Advertisement
RELATED ARTICLES
Earth-sized exoplanet found to have no atmosphere
NASA’s New Exoplanet Hunter Will Begin Searching for Earth-like Worlds Orbiting Other Stars This Year
Video: NASA Preps New Satellite to Search for New Worlds
NASA Retires Planet-Hunting Kepler Space Telescope
NASA finds Earth-size exoplanet orbiting a habitable zone
Advertisement