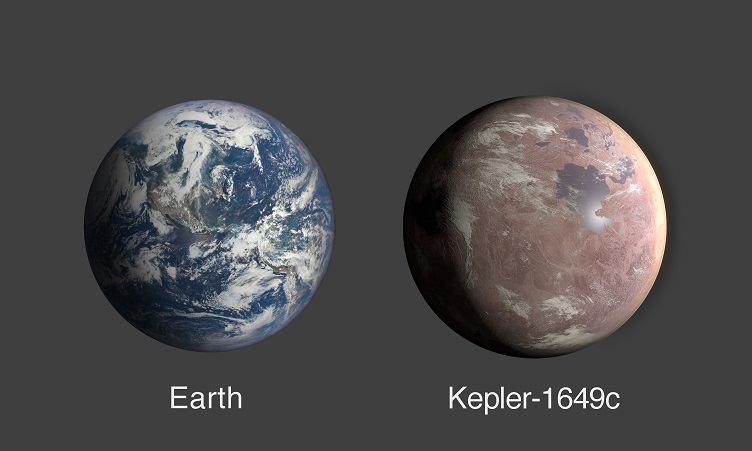 A comparison of the planet found from the Kepler satellite and the Earth. Source: NASA

A team of NASA scientists using data from the Kepler space telescope have discovered an Earth-size exoplanet that is orbiting a star in the so-called habitable zone.

The planet, called Kepler-1649c is located about 300 light years from Earth and is most like Earth in size and estimated temperature. Researchers found the planet after reviewing previous Kepler data.

Kepler-1649c is only 1.06 times larger than Earth but the amount of starlight it receives from its host star is 75% of the amount of light Earth receives from the Sun. This means the temperature may be similar to our planet as well. Unlike Earth, it orbits a red dwarf, a type of star that is known for stellar flare-ups that may make a planet’s environment challenging although none have been observed in this system, NASA said.

"This intriguing, distant world gives us even greater hope that a second Earth lies among the stars, waiting to be found,” said Thomas Zurbuchen, associate administrator of NASA’s Science Mission Directorate in Washington. “The data gathered by missions like Kepler and our Transiting Exoplanet Survey Satellite (TESS) will continue to yield amazing discoveries as the science community refines its abilities to look for promising planets year after year."

Scientists are particularly interested in rocky planets orbiting red dwarfs because not a lot is known about these planets. Based on what is known about Kepler-1649c, it could potentially be habitable, but more research is needed before determining if life could be supported.

Kepler-1649c orbits the red dwarf about 19.5 Earth days, like Venus orbits the Sun at about half the distance that Earth does. As red dwarf stars are among the most common in the galaxy, planets like this could be more common than NASA previously thought.

By posting a comment you confirm that you have read and accept our Posting Rules and Terms of Use.
Advertisement
RELATED ARTICLES
NASA Retires Planet-Hunting Kepler Space Telescope
Plan a Virtual Trip Beyond Our Solar System with NASA
Earth-sized exoplanet discovered by NASA’s TESS satellite
NASA’s New Exoplanet Hunter Will Begin Searching for Earth-like Worlds Orbiting Other Stars This Year
Video: NASA Preps New Satellite to Search for New Worlds
Advertisement