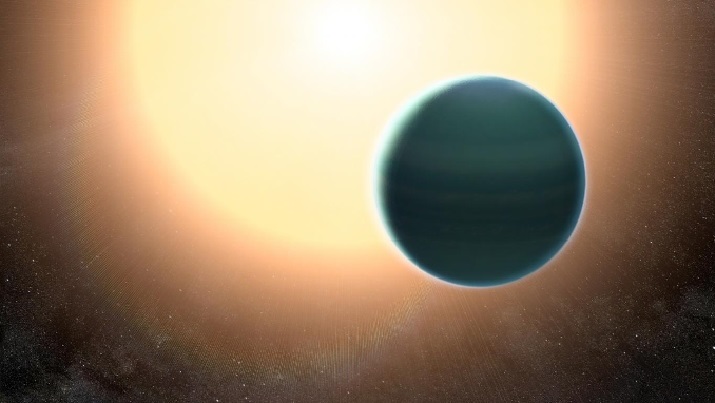 "Not too long ago, it was exciting just to find an exoplanet," said Drake Deming, a professor of astronomy at the University of Maryland, co-author of a new study led by NASA that challenges some long-held assumptions about planetary formation. "As technology and methods become more refined, we are building a whole new understanding of the wide diversity of planetary systems beyond our own. It's a very exciting time to be in this field."

Astronomers have recently begun to investigate the atmospheres of “warm Neptunes,” planets with masses similar to that of Neptune in orbits close to their host stars. One such planet is HAT-P-26b, located about 437 light years from Earth. The discovery of a primitive atmosphere around the planet composed almost entirely of hydrogen and helium was unexpected.

The research team combined data from the Hubble and Spitzer Space Telescopes to study the starlight signature of the planet’s host star, which is roughly twice as old as the Sun. By monitoring signature changes during a transit—an occasion where the planet passes in front of its host star, absorbing specific wavelengths of light—the scientists were able to work backward to figure out the chemical composition of the atmosphere.

Researchers were also able to use the planet’s water signature to estimate its metallicity—a measurement of richness in elements heavier than hydrogen and helium, which provides clues about how a planet formed. In our own solar system, Neptune’s high metallicity is a result of its formation in a region toward the outskirts of the dust, gas and debris swirling around the immature sun, where it was bombarded with icy debris rich in heavier elements. HAT-P-26b, by contrast, has a low metallicity more comparable to that of Jupiter, which the researchers believe is an indication that it formed closer to its host star, or later in the development of its planetary system, or a combination of both.

"This analysis shows that there is a lot more diversity in the atmospheres of these exoplanets than we were expecting, which is providing insight into how planets can form and evolve differently than in our solar system," said David K. Sing of the University of Exeter, second author of the paper. "I would say that has been a theme in the studies of exoplanets: Researchers keep finding surprising diversity."