Solar Conversion of CO2 to CO with Low-cost Catalyst

Electrolysis technology can be applied to split carbon dioxide into oxygen and carbon monoxide, which can then be transformed into liquid fuels. However, available CO-forming catalysts are either not selective enough or too expensive to be industrially viable.

Researchers from École polytechnique fédérale de Lausanne (EPFL), Switzerland, have developed a catalyst based on copper-oxide nanowires modified with tin oxide which could advance efforts to synthetically produce carbon-based fuels from carbon dioxide (CO2) and water.

In a solar-driven system, the catalyst was able to split CO2 with an efficiency of 13.4 percent and reach a Faradaic efficiency of up to 90 percent. The catalyst is formed by depositing atomic layers of tin oxide on copper oxide nanowires. Tin oxide suppresses the generation of side-products commonly observed from copper oxide catalysts, leading to the sole production of CO in the electroreduction of CO2.

The catalyst was integrated into a CO2 electrolysis system and linked to a triple-junction solar cell (GaInP/GaInAs/Ge) to make a CO2 photo-electrolyzer. The resulting gases are separated with a bipolar membrane. 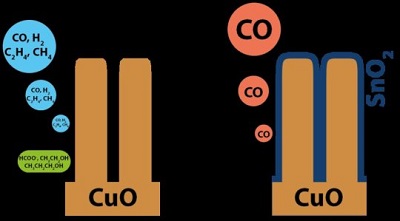 A schematic summary of the electrocatalytic system. (Source: Marce Schreier/EPFL)

By posting a comment you confirm that you have read and accept our Posting Rules and Terms of Use.
Re: Solar Conversion of CO2 to CO with Low-cost Catalyst
#1

Why would you want to change CO2 to CO???

CO is poisonous, while CO2 is plant food the earth needs more of, it is environmentally harmless and it is not a pollutant. Man-made CO2 stays on the ground where it is produced as it is 1.5 times heavier than air. CO turns back into CO2 naturally anyway.

If your answer is: 'Because of Global Warming' you would be dead wrong. Firstly, man has no influence whatsoever about it, and secondly, Global Warming is good.

I wish it would get warmer, temperatures have not changed in the last 15 to 20 years.

It is time to get off the 'politically correct' band wagon.

Re: Solar Conversion of CO2 to CO with Low-cost Catalyst
#2

"Scientific" charades aside, CO is used in many industrial settings (e.g. metallurgy, to make synthetic diesel, lasers, etc)-- it would not be released into the atmosphere, my friend.