Pieces to Environmental Puzzle Begin to Come Together 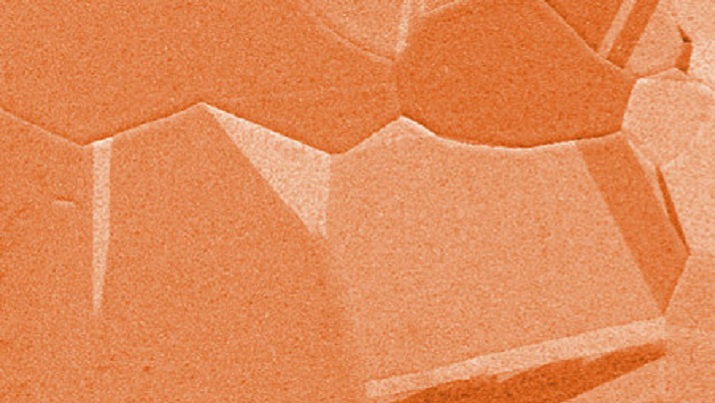 Microscopic details on the surface of copper foil used as a catalyst in a chemical reaction. (Source: Berkeley Lab)What if we could convert carbon dioxide from its harmful presence in the atmosphere into beneficial liquid fuel? Plants make fuel from CO2 all the time — but research has not yet cracked the challenge of artificially producing the fuels on a scale large enough to be useful. It’s a chemical puzzle that two teams of researchers — theorists at Caltech and experimentalists at the Department of Energy’s Berkeley Lab — combined forces to try to solve.

Both teams are part of the Joint Center for Artificial Photosynthesis (JCAP), a DoE Energy Innovation Hub. Led by Caltech in partnership with Berkeley Lab, the Stanford Linear Accelerator Center and UC campuses at San Diego and Irvine, JCAP’s goal is to convert CO2 into high-value chemical products like liquid fuels.

"One of our tasks is to determine the exact sequence of steps for breaking apart water and CO2 into atoms and piecing them back together to form ethanol and oxygen," said Prof. William Goddard, who led the Caltech team.

The researchers have published a new study in the journal Proceedings of the National Academy of Sciences reporting on the mechanics behind an early key step in artificially activating CO2 to chemically transform itself into ethanol. The Caltech group used quantum mechanics to predict what was happening at atomic scales, while the Berkeley Lab group used X-ray studies to analyze the steps of the chemical reaction. The way the two groups’ work intersected one another was key to their discovery.

Copper was used as the catalyst for the reaction. Copper is not efficient enough to make large quantities of ethanol on its own — but at the Berkeley lab, it was found that a thin foil sheet of copper exposed to CO2 gas would bind weakly to CO2, and that adding water would bend the gas into the shape needed to ultimately form ethanol. Meanwhile, the Caltech group, using quantum mechanics and computer models, was finding that pure copper would not bind the CO2 and that water would not activate it. The seemingly contradictory results were explained by the fact that — unlike the copper used in the computer model — the copper used in the real-world experiment contained tiny amounts of oxygen beneath its surface. Once the theorists took that sub-surface oxygen into account, their calculations agreed with the experiments.

The theorists also predicted that the CO2 would not be activated if too much oxygen were present — a prediction that was confirmed by the experimentalists. "This back and forth between theory and experiment is an exciting aspect of modern research and an important part of the JCAP strategy for making fuels from CO2," says Goddard.

Subsequent X-ray studies helped to further hone in on oxygen’s role in the reaction. "Having oxygen atoms just beneath the surface — a suboxide layer — is a critical aspect to this," says Ethan Crumlin, a scientist at Berkeley Lab. "The X-ray work brought new clarity to determining the right amount.” The scientists say that presence of the oxygen in the copper causes some of the copper to become positively charged; this stabilizes the CO2 so that it can bind to water and take on the bent configuration essential to eventually making ethanol.

The Caltech researchers have used quantum mechanics to predict ways to make the reaction more efficient; a second paper published in PNAS reports that a copper surface striped with both neutral and positively-charged copper will better speed the reaction along. They call the strategy MEOM, or metal-embedded-in-oxygen-matrix, and they are now using it to predict the best oxide material for achieving the fastest reaction.

Re: Pieces to Environmental Puzzle Begin to Come Together
#1

Who exactly has scientifically proven beyond doubt that CO2 is factually harmful in the atmosphere?

That weak and unsubstantiatable opening statement made me not want to take the whole article serious..

Especially given that without CO2 in the atmosphere we humans would die of starvation since all primary life supporting plant life on those planet would die without it.

Re: Pieces to Environmental Puzzle Begin to Come Together
#2
In reply to #1
IdeaSmith

And in addition they should by now know that it will always take energy to transform CO2 into something with more energy content. Most off the time more than what is recoverable afterwards.

Re: Pieces to Environmental Puzzle Begin to Come Together
#4
In reply to #2
JPOWERS

The idea behind this is the portability and convenience of liquid fuel-- the creation of which is powered by free fuel...

Re: Pieces to Environmental Puzzle Begin to Come Together
#6
In reply to #4
IdeaSmith

Re: Pieces to Environmental Puzzle Begin to Come Together
#3
In reply to #1
JPOWERS

You've heard of The American Institute of Physics and NASA, yeah?

Re: Pieces to Environmental Puzzle Begin to Come Together
#5
In reply to #3
tcmtech

Actually your two references show the problem/bias that comes from over simplification of complex, and so far, not well understood systems of extreme dynamic complexity and using both inconclusive, incomplete, disproven or just wrong/made up data sets to make a point based on 'potential for' not 'proof of'.

That and picking highly selective reference data as proof while ignoring the much larger and more in depth sets that show that there is far more question and uncertainty than what you have chosen to represent your claims implies.

Also your NASA link has this,

"Ninety-seven percent of climate scientists agree that climate-warming trends over the past century are very likely due to human activities, and most of the leading scientific organizations worldwide have issued public statements endorsing this position."

A now extremely well known and well debunked claim that everyone who follows the real science of climate study knows is pure leftist BS and that whenever it's seen the data it's supposed to reinforce is also almost always guaranteed to be of and for and as equally misrepresented leftist pseudo science AGW agenda based BS claim as well.

Fake/biased science backed up by fake/biased claims or bad science backed up by already disproven data and claims is not credible let alone proof of anything but that the person who is still believing it needs to do far more unbiased research and study regarding the reality of what it is they are interested in proving or disproving.

Co2 Vs planetary temperature correlations. (They are not what's being claimed.)

Atmospheric physicists do not agree with mainstream political views.

"97% of scientists" claim is BS and here why. (Misrepresented context in claim)

The reality is it's a huge and complex systems with a huge number of inputs and influences and we are not a significant player for the reasons too many what to portray us as.