When it comes to energy use, Danish toy manufacturer LEGO Group is not playing around. After four years and a DKK 6 billion (€800 million, $888.9 million USD) investment in two offshore wind farms, the company has achieved its ambition to balance 100 percent of its energy use with energy from renewable sources – three years ahead of schedule.

Since 2012, the LEGO Group has supported the development of more than 160 megawatts of renewable energy since 2012, with its latest investment a 25 percent stake in the recently opened Burbo Bank Extension wind farm off the coast of Liverpool, UK. 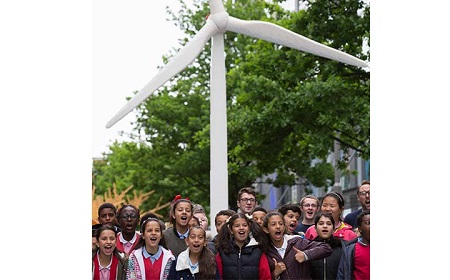 The largest LEGO brick wind turbine was built to celebrate the 100% renewables milestone. (Source: LEGO Group)The total output from these investments now exceeds the energy consumed at all LEGO factories, stores and offices globally. In 2016, more than 360 gigawatt hours of energy were used by the LEGO Group to produce the more than 75 billion LEGO bricks sold around the world during the year.

The company also plans to install 20,000 solar panels on the roof of the LEGO® factory in Jiaxing, China. The panels will produce almost 6 gigawatts of energy per year, equivalent to the electricity use of more than 6,000 Chinese households.

To celebrate its energy milestone, LEGO Group has built the largest ever LEGO® brick wind turbine, a Guinness World Records™ title. Built with 146,000 LEGO bricks, the wind turbine stands 7.5 meters tall and is a tribute to the record 200 meter tall wind turbines of the Burbo Bank Extension wind farm − the largest windmills now in operation.

By posting a comment you confirm that you have read and accept our Posting Rules and Terms of Use.
Advertisement
RELATED ARTICLES
Watch: LEGO to Launch Sustainable, Plant-based Plastic Bricks
Watch: Mercedes-Benz is entering the US energy storage market. Honeywell signs a predictive analytics deal with a big air carrier. LEGO snaps together a renewable energy portfolio.
LEGO pays tribute to moon landing anniversary
Watch: Self-assembly of a New Hydrogen Fuel Cell Catalyst
Video: Using Lego Bricks to Move Beyond the Lab-on-a-Chip
Advertisement