Video: Using Lego Bricks to Move Beyond the Lab-on-a-Chip 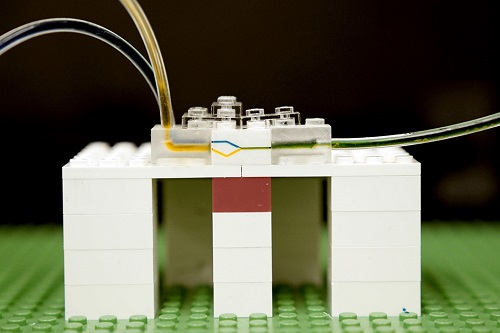 Microfluidic devices are those that precisely manipulate fluids at submillimeter scales. These devices are typically flat, 2D chips etched with tiny channels and ports to perform various operations such as mixing, sorting, pumping and storing fluids.

Researchers at MIT have found an alternative way to build microfluidics that moves beyond these typical lab-on-a-chip designs by using Lego bricks. Now, a children’s toy may not seem like the best way to introduce a new technology but because of the global, ubiquitous nature of Legos (they are manufactured the same way regardless of where they are found in the world), MIT believed these would give the device a high degree of precision and consistency.

MIT micromilled small channels into the Legos and positioned the outlet of each “fluidic brick” to line up precisely with the inlet of another brick. Then, researchers sealed the walls of each modified brick with an adhesive, enabling modular devices to be easily assembled and reconfigured.

The bricks can be designed with a particular pattern of channels that perform a specific task. MIT has engineered bricks as fluid resistors, mixers and droplet generators. And because they are Legos, each fluidic brick can be snapped together or taken apart to form microfluidic devices that can do functions such as sorting cells, mixing fluids or filtering out molecules.

“You could then build a microfluidic system similarly to how you would build a Lego castle — brick by brick,” says Crystal Owens, a graduate student in MIT’s Department of Mechanical Engineering. “We hope in the future, others might use Lego bricks to make a kit of microfluidic tools.”

However, there are some issues with this method as MIT was only able to fabricate channels that are tens of microns wide, some microfluidic operations need much smaller channels. Also, because Legos are made of plastic, they can’t withstand exposure to certain chemicals used in microfluidic systems.

While MIT is experimenting with different coatings to make it compatible with these fluids, micromilling smaller channels remains a challenge. At this time, Lego-based microfluidic devices can be used to manipulate biological fluids and perform certain tasks. The MIT team plans to create a website that will give information to other designers on how to build their own microfluidic device using standard Legos.

“Our method provides an accessible platform for prototyping microfluidic devices,” says Anastasios John Hart, associate professor of mechanical engineering at MIT. “If the kind of device you want to make, and the materials you work with, are suitable for this kind of modular design, this is an easy way to build a microfluidic device for lab research.”

To build the device, the MIT team purchased off-the-shelf Lego bricks and used a desktop micromill to first mill a simple, 500-micron-wide channel into the side of the wall of a Lego brick. Then a clear film was taped over the wall to seal it and pump fluid through the newly milled channel. The fluid flowed successfully through the channel and became a functional flow resistor, a device that allows small amounts of fluid to flow through it.

Then researchers fabricated a fluid mixer by milling a horizontal, Y-shaped channel and sent different fluids through each arm of the Y. As the fluids met, they mixed. Then a Lego brick with a T-shaped channel was fabricated and when liquid dropped down through the middle, it formed a droplet as it exited the brick.

MIT researchers built a prototype onto a standard Lego baseplate consisting of several bricks, each designed to perform a different operation as fluid is pumped through. Another design included a Lego brick that functions as a light sensor to measure light as fluid passed through a channel.

The hardest part was figuring out how to connect the bricks together, without fluid leaking out. While Legos are obviously designed to snap together, there is still a small gap between the bricks. Researchers had to seal this gap with a small O-ring around each inlet and outlet in the brick.

By posting a comment you confirm that you have read and accept our Posting Rules and Terms of Use.
Advertisement
RELATED ARTICLES
LEGO pays tribute to moon landing anniversary
LEGO Builds 100% Renewable Energy Base
Take a Virtual Ride on World’s Largest LEGO Wooden Roller Coaster
Legos Inspire Next Generation Materials
The Lab-on-Chip Revolution: Finding the Right Niche
Advertisement