What are Ultrasonic Flaw Detectors?

What are the flaws and why detect them?

Flaws create stress concentrations and can compromise the integrity of a structural component resulting in a premature failure below the design stresses. Depending on the size, shape (round vs sharp notch) and amount of flaws, the static mechanical properties (tensile strength, elongation, toughness) can be reduced. A small amount of fine porosity may not reduce static properties significantly. However, even a small amount of porosity can dramatically reduce dynamic properties like fatigue strength, so components under highly cyclic loads should be monitored for flaws before and during service.

Ultrasonic flaw detection is important in the aerospace, automotive, infrastructure (bridges, towers, etc.), manufacturing, marine, oil & gas and power generation industries. Aging structures such as bridges, airframes, pressure vessels, reactors, and ships require nondestructive testing to ensure material integrity, airworthiness and overall safety for humans as well as for protection of the environment and the prevention of major capital equipment losses. Ultrasonic testing or monitoring is used during the manufacturing of composites, welds, metal alloy plate or rolling mill stock products to detect voids, inclusions, and flaws and adjust process parameters to eliminate these manufacturing defects.

A variety of flaws occur in materials and parts either during manufacturing or due to aging effect in the field: 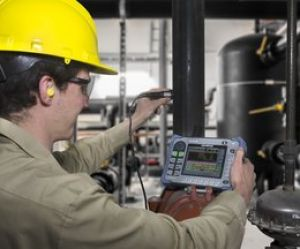 Nondestructive testing (NDT) or nondestructive evaluation is performed by NDT personnel to verify the structural integrity of new and aging products, components and materials. The American Society of Nondestructive Testing (ASNT) is the premier organization involved in training and certifying NDT personnel, developing NDT standards, promoting the use of NDT best practices, encouraging exploration into new NDT methods, sharing of NDT expertise and research through conferences, meetings and publications. In many industry applications, an ASNT Level certification is required. For instance, companies often require inspection personnel to be qualified and hold an ASNT certification in Ultrasonic Testing (UT). Various Levels of ANST NDT certification are available depending on the experience and examinations passed. NDT personnel are also required to periodically re-certify.

How do ultrasonic flaw detectors work? 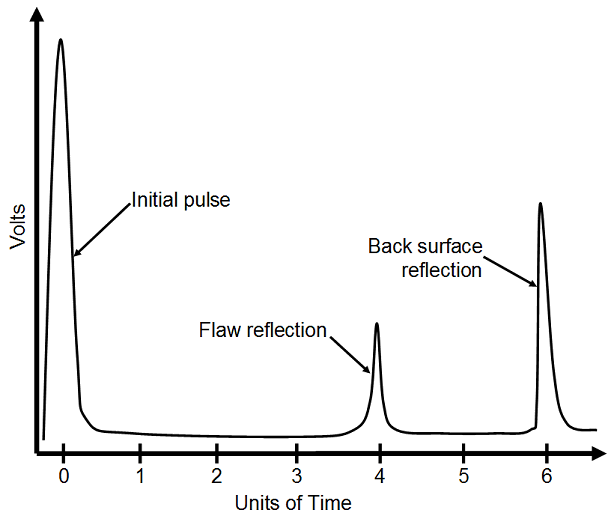 Figure 4 - Time of flight display signal volts versus time. Image courtesy National Instruments.ltrasonic testing generates the sound impulse or wave using a pulser-receiver and then this signal is sent to an Ultrasonic Transducer. A stress wave is propagated through the part using an ultrasonic transducer, which converts electrical energy into high frequency sound waves in the ultrasonic range. Modern ultrasonic instruments have additional signal processing components such as digitizers or analog-to-digital converters, signal amplifers and signal filters to reduce noise, improve signal detection and enhance interpretation. These sound waves are then focused on a target and the echo is read by transducer or other pick-up sensors or receivers to determine a specific variable such as distance and speed. The acoustic impedance and speed of sound in a material varies with the densities and elastic properties. Reflections occur at the interfaces between different material created by the flaws, joints, laminations, cracks or voids. Depending on the specific UT technology and transducers employed, the ultrasonic pulse allows detection and determination of the flaw depth, flaw size and even flaw imaging. The time the reflection takes to return to transducer can be converted into a distance or depth based on the speed of sound within the material. The back surface reflection time indicates the thickness of the material. Modern ultrasonic instruments convert time into depth for the user. 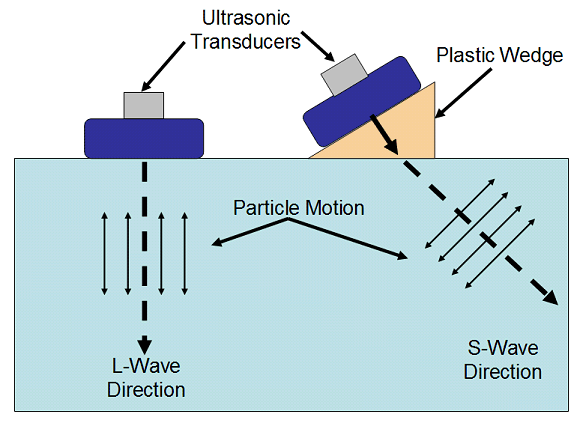 Figure 5 Longitudinal waves and shear waves propagating through a material and reflecting off a flaw. Courtesy National Instruments.An impact, ping or ultrasonic pulse initiates S, R and L waves in a material. S-wave and R-wave propagate out along spherical wave fronts from the source pulse. The S-wave is associated with shear stress or strain and the longitudinal wave (P-wave or L-wave) is associated with normal stress or strain. The R-wave travels along the part’s surface. Longitudinal waves are best suited for detection of flaws, cracks or delaminations orientated parallel to the part's surface, while shear waves are better at detecting flaws, welds or cracks orientated perpendicular to the material's surface.

Krautkramer, et al. in 1990 related the elastic modulus (E), shear modulus (G), Poisson’s ratio (ν) and density (ρ) of a material to P-wave and S-wave speed through the following formulas:

The reflection coefficient is related to the specific acoustic impedances of the materials comprising the interface. 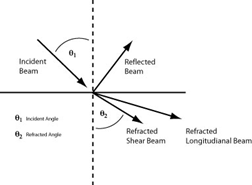 Figure 6 - Snell's Law of Refraction - describes the angular relationships between incident, refracted and reflected sound waves or beams. Courtesy Olympus Corp.
The geometry of the part and angle of the sound beam with respect to the parts surface has an impact on the ultrasonic testing results. A sound beam or pulse hitting the surface at a right angle to the surface or perpendicular will reflect straight back. Ultrasonic testing with the transducer imparting the pulse perpendicular to the part is called straight beam testing. Angle beam ultrasonic testing occurs when an ultrasonic pulse directed into a part at an angle, which then propagates forward at the same angle and is reflected at a parallel surface at the same angle. Snell's law of refraction governs how the sound travels according to the following formula:

The distinctive echo patterns or spectra produced by the signal from the reflected waves are recorded and displayed on a screen. Calibration with standards and a degree of knowledge are required to interpret the patterns. Time domain frequency analysis and spectral analysis are used to extract information from the peaks in ultrasonic wave forms recorded. Olympus Corporation's "The Basics for Waveform Interpretation" provides a good introductory overview of the ultrasonic waveform interpretation process.

What types of ultrasonic flaw detectors are available? 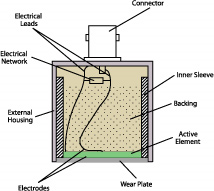 Angle beam ultrasonic flaw testing is useful in detecting cracks, delaminations or other flaw running perpendicular to the surface of a test piece or at an angle to part’s surface. Flaws at these orientations are typically invisible with straight beam UT techniques. 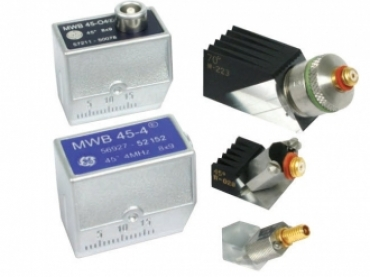 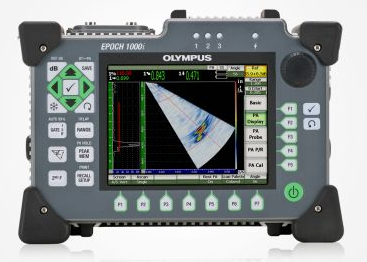 Electromagnetic acoustic resonance (EMAR) uses a non-contact EMAT transducer to impart a signal for resonant acoustic analysis. Electromagnetic acoustic transducers (EMAT) use a magnetorestrictive or eddy current effect to transmit and receive ultrasonic signals. The non-contact EM-induced signal produces a pure resonant response. EMAR has several advantage over conventional ultrasonic transducers such as no couplant requirement; usable on sample with scales, coatings, or heavy oxide layers; functional at high temperatures; and usable in contact with or at a small distance from surface; and even small diameter pipes can be inspected. The non-contact and no couplant features allow moving materials to be inspected during production processing. Mechanical vibration from surrounding machinery does not influence the ultrasonic signals in the materials or parts being inspected. Localized or wide acoustic fields can be generated, depending what features need to be isolated and measured. Small surface or subsurface flaws or anomalies can also be isolated. Specifically, the entire part can be resonated for elastic stiffness and structural integrity assessments. One limitation of EMAR is that the part being evaluated must be made of a conductive material.

Who are the leading manufacturers of Ultrasonic Flaw Detectors?

Where can I find Ultrasonic Flaw Detectors?

Ultrasonic flaw detectors products and suppliers can be found using our Ultrasonic Instruments SpecSearch® area. Users can find a directory of suppliers of ultrasonic instruments and a selection of products from some suppliers. A search form allow parametric search of flaw detector datasheets within the SpecSearch database. Several additional nondestructive testing (NDT) areas are available for finding and selecting NDT inspection products such as Flaw Detectors, NDT Equipment, NDT Probes and Sensors, Ultrasonic Transducers, Pulser-Receivers and NDT Supplies and Accessories.

By posting a comment you confirm that you have read and accept our Posting Rules and Terms of Use.
Advertisement
RELATED ARTICLES
Automotive composites, part 3: Quality, inspection and standards
Nondestructive Examination Tools: An Introduction
Top 3 FMC/TFM enhancements of the new OmniScan X3 flaw detector explained
TFM and other major advantages of the OmniScan X3 Flaw Detector for NDT inspectors: A customer review
Testing Composite Aircrafts
Advertisement 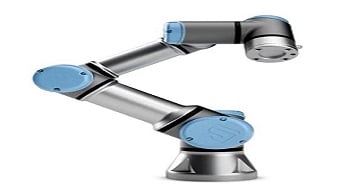