Nondestructive examination (NDE), also referred to as nondestructive testing (NDT), consists of a wide group of analysis techniques used in science and industry. NDE examines and obtains information on materials, components or welds to compare them against specific criteria for acceptance or rejection.

In contrast to destructive testing where the item being tested is damaged or destroyed during the process, NDE does not damage or destroy. NDE is a highly valuable technique that can save both money and time in product evaluation, troubleshooting and research.

NDE methods play an integral role in the power generation industry, as well as in aerospace, automotive, chemicals, defense and petrochemical. Innovations in the field of nondestructive testing also have had an impact on medical imaging and forensics.

(Learn more about NDT equipment through the Engineering360 product and supplier guide.)

Visual Inspection (VI) was the first and most simple method of inspection. It is the practice of viewing a piece of equipment to identify flaws. The naked eye is all that’s required, although special equipment such as borescopes and magnifying glasses are frequently used. Visual inspection is the initial, least-cost option which may be used with equipment in operation. It can be used for internal as well as external surfaces among the widest array of equipment to include boiler tubing, piping welds, turbine blades, storage tanks and pressure vessels, to name a few. It is one of the most reliable techniques to locate defects.

NDE is used extensively to meet ASME codes and standards requiring periodic inspections. Image source: RWE.comRemote Visual Inspection (RVI) is an extension of VI which uses various types of videoprobes, remotely operated cameras, robotic crawlers, drones and other specialized tools to remotely examine and inspect components. There are several different methods of RVI that can be used to inspect a variety of equipment. RVI basically consists of a camera or video feed using fiber optics or a remote light source. Some use computer systems to enhance functionality. RVI’s primary advantage is its ability to remotely examine plant system which would require disassembly, scaffold erection or confined space entry. It provides safety and cost savings over the alternatives. RVI applications may involve drones inspecting boiler furnaces, piping hangers or chimneys. Applications could also involve videoscopes to evaluate boiler tubing internal scale or identify turbine blade deposition. When equipped with extraction tools, RVI can also detect and retrieve foreign material.

Penetrant Testing (PT) is also referred to as Liquid Penetrant Inspection (LPI) or Dye Penetrant Inspection (DPI). PT is a popular and relatively inexpensive inspection method used to identify surface-breaking defects such as hairline cracks, weld porosity and fatigue cracking. Visual inspection may be performed on in-service equipment, so long as it is not hot, with the surface free of dust, scale and oil. A fluorescent dye reveals surface flaws which might not otherwise be visible. The technique works via the principle of “capillary action,” whereby liquid, indifferent to gravity, flows into a small, narrow space. The technique’s primary drawback is its inability to detect sub-surface flaws. Although operator experience is quite valuable, only limited training is required.

Magnetic-Particle Inspection (MPT) is similar to PT and is often used among ferromagnetic materials for its flaw detection capability. It is a popular NDE method because it does not require the extensive surface preparation of the other surface approaches.

MPT, in particular, identifies subsurface flaws in addition to those exposed on the surface. It is one of the best methods for detecting fine, shallow surface cracks. MPT typically is fast and simple to perform and works through thin coatings such as paint. It’s capable of inspecting components of irregular shape (for example, cast valve bodies, welded nozzle penetrations, and so on).

NDT is commonly used in power plants, but also is a tool used in aerospace, automotive, chemicals and petrochemical settings. Image source: RWE.comTwo MPT variations exist: wet magnetic particle testing (WMPT) and dry magnetic particle testing (DMPT). Both initiate by applying magnetic current to the component. Material voids in the form of cracks or defects will interrupt current flow. Magnetism then disperses the particles to create a “flux leakage field” at the flaw location, visually providing its approximate size and shape.

Despite its strengths, MPT is not without drawbacks. The material must be ferromagnetic. Similarly, the positioning and strength of the magnetic field is essential. Defects beneath a certain surface depth require alternative methods. After the inspection task is complete, the component must be demagnetized, which may prove difficult or time consuming.

Metallographic Replication Testing (Replication) is a process used when evaluating for surface defects. It is the practice of using thin plastic films to duplicate a material’s microstructure in order to observe the metallurgical grain structure at a high magnification. Replication is commonly used to duplicate surfaces inaccessible to other forms of NDE. It enables in-service assessment of the general microstructure of a component and its changes over time. Replication is capable of porosity, inclusion and creep damage identification. It involves rigorous surface preparations and safety precautions. Detecting and identifying microstructural flaws requires highly trained personnel which renders this method relatively expensive among other surface NDE methods. Replication is most commonly used among high energy piping systems to identify creep damage. 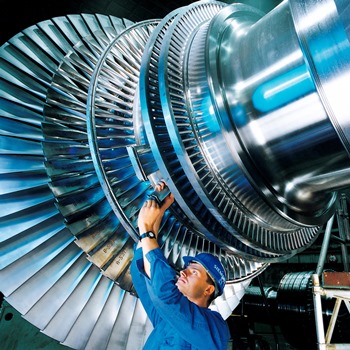 NDE in its many variations is used widely during maintenance outages at electric power plants. Image source: Wikimedia.orgEddy Current Array (ECA) is a practice involving placing multiple eddy current coils side-by-side in a probe assembly. Individual coils within the probe produce a signal as they move over an object, the strength of which depends on the phase and amplitude of the discrete location. Each distinct signal is measured and its data recorded. This data can then be represented visually as a C-scan image providing flaw signatures. Advantages of ECA over regular eddy current testing include improved flaw detection and the ability to scan larger areas while maintaining high resolution. Complex geometries can also be inspected by customizing the probes to fit the profile of the object to be tested. ECA is used for a variety of power plant inspections including steel thickness measurements and corrosion detection. Vessels, storage tanks, piping systems and structural members are areas common to ECA testing.

Pulsed Eddy Current (PEC) is another eddy current application for detecting flaws or corrosion among ferrous materials or performing thickness measurements. It contains a continuum of frequencies which make it possible to measure several different depths can simultaneously. PEC offers one of the most efficient eddy current inspection techniques through rapid data acquisition and the ability to penetrate through and perform in-service inspections without surface preparation. PEC is used to measure thickness and corrosion. In particular, flow assisted corrosion among boiler feedwater systems has become a popular PEC application as it proves a quick and cost effective solution.

Ultrasonic Testing (UT) techniques are a group of NDE methods employing the transmission of high-frequency sound waves through a material to detect flaws within the material. The pulse-echo method emits waves from a small probe and measures the time it takes for them to travel through a material and bounce back from the other side. It is, perhaps, the most common method used by power plant personnel to measures thicknesses of pipes, plates and tubes. It’s cheap, easy, fast and reliable and only requires access to one side of the material, unlike calipers or a micrometer.

Time of Flight Diffraction (TOFD) is an advanced UT technique used to identify weld flaws. It employs the time of flight of an ultrasonic pulse to identify the location of a reflector. The technique uses a pair of ultrasonic transducers to identify time of flight. A transmitter emits low frequency waves which propagate at an angle. Tips of a weld crack, when struck by a wave, will diffract the signals back to the receiver on the surface. The tip depths can be determined from the diffracted energy.

The capability to execute a volumetric sectorial scan electronically with PAUT significantly increases the probability of identifying critical defects such as cracks and lack of weld fusion in comparison to conventional UT. It is used extensively to identify and size weld defects among large-bore components such as high energy piping. PAUT has become popular due to its ability to perform critical inspections at a fraction of the cost of traditional methods and with minimal disruption of work. Although PAUT provides an accurate method for thickness and sizing measurements and provides an efficient alternative to radiography, it can be complicated for the inexperienced inspector to understand and use properly. PAUT also has difficulty detecting small volumetric indications (that is, porosities) and sizing small surface defects.

Radiographic Testing (RT), for many years, RT was the primary weld examination technique for crack detection. This procedure emits radiation through the component and registers the exiting backscatter radiation through photographic or electronic means. The radiation may be produced either through radioactive sources or x-ray machines. RT provides a permanent, pictorial, volumetric record of each examination for archiving and subsequent review making it a preferred method in some applications.

While delivering unquestionable results, RT may have significant drawbacks prohibiting its use in many cases. In the field, large areas around the inspected weld must be evacuated for extended periods of time, often interrupting other unrelated work. For safety purposes, the inspection team requires additional qualified personnel to handle radioactive sources and safeguard others from exposure. RT results are limited in that defects cannot be located or sized precisely and components with complicated geometries can be difficult to interpret. Moreover, RT results are delayed because the film needs to be placed, removed, and processed.

These NDE examples describe only the most common NDE techniques. Others exist for specialty applications. Also, technological advances and innovation continue to move many of these techniques toward new frontiers.

By posting a comment you confirm that you have read and accept our Posting Rules and Terms of Use.
Advertisement
RELATED ARTICLES
Gas turbine inspection and repair techniques
What are Ultrasonic Flaw Detectors?
Engineer's Guide to Boiler Tube Inspections
High-Energy Piping: Where to Inspect?
Automotive composites, part 3: Quality, inspection and standards
Advertisement